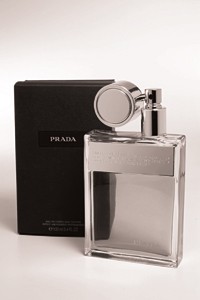 MILAN — Prada Group may be aiming for a $60 million fragrance business at retail in the U.S., but Patrizio Bertelli, the group’s chief executive officer, has no intention of wearing Prada’s first men’s scent, Amber Pour Homme.

Not to worry though, says designer Miuccia Prada, Bertelli’s wife.

“I’ll wear it for the whole family,” she quipped, noting her husband and two teenage sons aren’t very interested in fragrance. The scent was unveiled here after Prada’s spring-summer 2007 men’s wear show on Tuesday evening.

Prada said she enjoyed formulating the new fragrance as much as she did putting the final touches on a garment.

“I felt like a nose, it was the best job, I had fun creating the fragrance,” said Prada sitting backstage at the brand’s showroom.

Regarded as one of the fashion world’s most intellectual designers, Prada said she started her first men’s fragrance project with a clear idea in mind, just as she had done for the first two Prada women’s scents.

“I just tried to imagine what I would like if I were a man. You know people ask me if there is a muse, an inspiration, a thought driving my ideas, but I just know what I like,” said Prada.

The designer said she had always been fascinated with fragrance and that part of the reason for creating a perfume portfolio for the brand stemmed from the fact that she could no longer find something she liked to wear.

“I was desperate when this boutique called Shelley Merts on Madison Avenue closed that sold the scent I wore my whole life,” said Prada.

On the day of her men’s wear show, Prada wore a personal adaptation of a Prada women’s scent, and alternates between that and others from the Prada fragrance portfolio.

Amber is the key ingredient in Amber Pour Homme, which links it to Prada, the brand’s first women’s fragrance, which was launched in 2004.

Under the creative direction of the designer, Givaudan perfumer Daniela Andrier spent 18 months perfecting the scent, which she described as a simple fragrance created by a complex idea.

“The whole idea of Amber Pour Homme is that it is harmony through conflicting elements,” said Andrier, who added Prada helped her achieve the final end result.

In addition to the amber accord, a fougère accord is added for contrast. To achieve the amber note, a combination of vanilla, tonka bean, labdanum oil and patchouli was used. For the fougère aspect, there’s geranium, vetiver, orange blossom, myrrh and musk. Finally, leather notes are softened with a blend of saffron oil and sandalwood.

“It’s a sensual fragrance for a confident and nonconformist [man],” said Jordi Puig, who is vice president of organization and business development for Prada’s licensee Puig Prestige USA. “It continues the amber story that was started with the women’s fragrance.” He was speaking during a separate interview in New York.

In the U.S., the collection will feature two 100-ml. bottles, one for $90 and the other for $68. Both bottles feature a modern, minimalist industrial design. But the more expensive version sports a round, button-like pump, perhaps best described as a masculine atomizer.

“It’s a very iconic bottle,” said Puig. There will also be a 50-ml. bottle for $49.50. All three bottles feature an off-center cap and an “artisan metal plaquette” stamped with some of the scent’s ingredients, Puig noted. Pochet and Saint-Gobain Desjonqueres produce the bottles for the collection. Navy blue outer packaging features the same Prada textured knit label that’s found on the apparel.

In the U.S., the scent will first be launched in August at Neiman Marcus, Bergdorf Goodman and Prada boutiques, of which there are 175 globally, including 18 in the U.S. It will then be rolled out to about 850 doors, including Saks Fifth Avenue, Nordstrom, Bloomingdale’s, Sephora and selected department stores from September through December.

“The goal is to mirror the distribution we have with the women’s scent,” said Puig, adding, “We want the men’s [scent] to be in the top 10 this year in this distribution [network].”

While Puig declined to discuss numbers, industry sources estimate Prada Parfums, which includes the two-year-old signature women’s scent, the 2004 entry Prada Intense and the current launch of Eau de Parfum Tendre (or Tender, in English), could reach combined retail sales of $35 million to $40 million in the U.S. by the end of the year.

The men’s scent alone could generate sales of $20 million in first-year retail sales in the U.S., according to industry sources.

Internationally, the men’s scent will be launched in 27 countries in August followed by another 15 countries next year. Prada Parfums’ key global markets include the U.S., France, Germany, the U.K., Italy and Spain.

“For us this [men’s scent] is truly an important launch,” Puig asserted.

The visual will break in August issues of W, Men’s Vogue and Allure in the U.S. In conjunction with the rollout of the scent, the advertising plan will also widen in the fall to include more magazines. Industry sources estimate at least $10 million will be spent in the U.S. to support the launch of the men’s scent.