For the first time, the show was held at Fondazione Prada's Observatory in Milan, a venue that was also an inspiration for the collection. 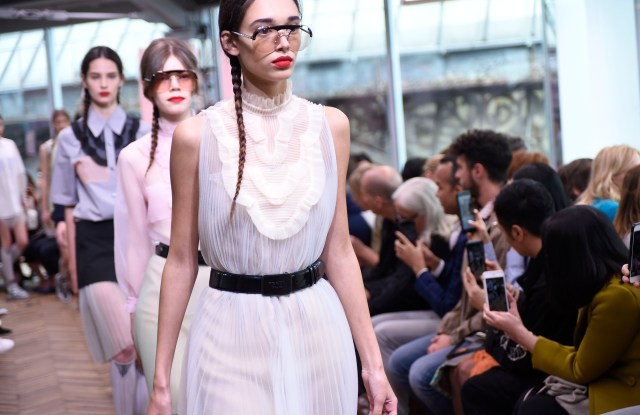 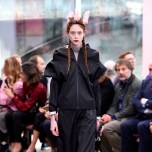 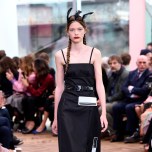 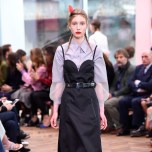 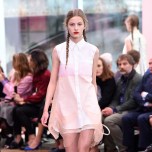 Miuccia Prada leaves nothing to chance.

Though always artistic and conceptual, her inspirations are also always rooted in reality and the world around her. Even more so for the resort collection Prada showed on Sunday, staged for the first time at the Fondazione Prada Osservatorio [Observatory], an exhibition space dedicated to contemporary art and visual arts. Located in the shopping arcade Galleria Vittorio Emanuele II, the Observatory is housed on two floors in a central building of the arcade above the central octagon, the Marchesi pastry shop and the men’s Prada store, opposite the brand’s first flagship, which opened in 1913. The show venue was at the level of the glass-and-iron dome covering the 19th-century arcade, which was reinterpreted by Prada’s go-to architect studio, Rem Koolhaas’ OMA/AMO.

Prada’s flurry of transparent dresses, feathers, sequins and crystal details contrasted with the setting. “I wanted to do a modernist show, then we had this place, and the lightness and the industrial were very much inspiring,” said the designer after the show. Lest anyone think the collection was one-way, Prada also aimed for “the perfect combination,” juxtaposing her feminine dresses with sportswear elements, waterproof jackets, miniskirts in a technical material, knee-high socks and even sneakers.

“I wanted to work on contemporary and sports but [aiming for] a metamorphosis into elegance.” Her goal, she explained, was to achieve elegance through sports and the other way around.

To this end, the venue was key, “resonating of the modernism of the period and the turn of the century sensual beauty. We thought those transparent dresses in front of the industrial cupola should look good.”

A look from the Prada resort 2018 collection.  Giovanni Giannoni/WWD

They sure did. Prada’s variation on the shirtdress; weightless scallop skirts; dresses sometimes embellished with feathers or with embroidered petticoats peeping underneath; diaphanous pleated skirts and high-neck blouses, or hyper-light mesh and chain skirts were stunning. The models, all in braids, walked in front of the iron dome beyond the expansive windows, and their path was enhanced by a linear arrangement of the seats, mirrored screens and pastel pink columns. Several of the looks also had touches of pastel hues. The transparency effect was obtained by working with synthetic cigaline.

“I love transparency at the moment. Sometimes I work with something I don’t like but this actually, I like. I don’t know why, [because] it’s a naked body but it’s also [delicate], and underlined by sports. Both are an obsession for the body, both are interested in the body,” Prada mused. “As always, I like the confrontation of the two and the fusion of the two but starting from the idea of doing something modern.”

Modern was a term that came up discussing her play with the brand’s logo, which was more graphic and in an expanded font, at times also splashed on a clutch, a belt or a top.

“Apparently it’s what is modern now, it’s only [about the logo], so it’s a provocation,” she said.

The Galleria and the 1913 flagship made “everything more Prada than usual, even if everything is Prada,” the designer said with a laugh.

She referred to the location playing a pivotal role as she designed the collection. “I really have in mind what this place means in history and also I really wanted to do a modernist show, so I started looking at the past. [The collection] resonates with [the venue] because it’s modernist and not at all decadent, but there is the beauty and charm of that period, the feminine eccentricity and sensuality of that period.”

Prada again worked with visual artist and illustrator James Jean, who created a whimsical rabbit print and Liberty prints seen on a delicate pantsuit or, in contrast, on the front of a parka. “We wanted a fantasy,” Prada explained simply. Jean in the past has created murals for the Prada Epicenter stores in New York and Los Angeles, and developed the “Trembled Blossoms” project for the house, among other projects.

Prada once again worked with visual artist and illustrator James Jean, who created a whimsical rabbit print and Liberty prints, as seen on this delicate pantsuit.

The designer admitted she played with her brand’s own archives — a bustier dress comes to mind — and with “archetypes. I always work on something that is known, what I sometimes call classic, such as the shirt.” She said she “wanted to do even more [with the archives], but we didn’t do it. It’s important now that you are really what you are and what you stand for.”

Just don’t call the collection “cruise.” “I don’t like the word, it sounds so old-fashioned, something useful but not a real show. Sometimes we write cruise, sometimes we don’t. We are always a bit eccentric,” she said with a laugh. “For me a show is a show. Until the last moment, I didn’t want to write anything [on the invitation], but then nobody understands what it is, so we thought we’d better write [resort].”

Will this be a yearly event at the observatory? “We don’t know yet,” said Prada.

The designer was equally noncommittal about the possibility of showing the brand’s men’s and women’s collections together. “We have yet to decide. But now we are free,” she said with good humor.

“I like her sense of humor and the very high quality of her pieces, that I can keep forever. I like to be comfortable, and her fashion is always comfortable,” said Sarandon of Prada. The actress was flying out the next day to film “Ray Donovan,” which she joined this season. She recently wrapped up “3 Generations,” with Naomi Watts, who plays her daughter, and Elle Fanning. “I am her grandmother and in the film she transitions into a boy,” Sarandon explained. Although this is a very of-the-moment topic, she said the film has been three years in the making. The process was made easier because “it was all very accessible, we were very lucky to be able to talk to kids and their parents” about the issue. Sarandon has also joined the cast of “A Bad Moms Christmas,” which will be out at the end of November.

“I feel myself when I wear Prada,” said Jagger. “I love her, I think she is the quintessential designer, feminine and understated. And timeless—I have pieces I’ve worn for many years.”

Love was headed to Venice for the Biennale, which kicks off next week. “This is my second time there, I will spend four days. I will mainly go to attend the [Fondazione] Prada dinner, but will also go to the Damien Hirst party,” she said.

Guests of the show were also invited to a dinner and preview of the exhibition “TV 70 Francesco Vezzoli Guarda la RAI [watches national television]” at Fondazione Prada in Milan’s Largo Isarco later in the evening. Vezzoli contends that Italy’s’ public broadcasting company was then “the main industry for Italian culture mirroring the social and cultural changes of the country from political radicalness of 1968 to the hedonism of the Eighties. You can’t compare television now. Netflix doesn’t tell you how many viewers are connected. I would like to add to every image [in the exhibition] the number of viewers back then – 30, 35 million. The morning after [the show] ‘Milleluci,’ the nation spoke of that. It was about the construction of rites and shared moments. Now there is the digital revolution. It’s nobody’s fault. It is what it is.”

Asked about the collaboration with Fondazione Prada, which for the occasion opened a new area of the sprawling venue, Vezzoli said that, beyond the friendship element, the “content needed to be in the context of a top art institution that had no political connotation.”

Vezzoli was warmly embraced by Milla Jovovich, who has just wrapped up her press tour for the latest “Resident Evil” movie. “We’ve known each other for 20 years now,” she said, remembering how she first wore Prada for the premiere of “Joan of Arc.” “I got in trouble for a movie that doesn’t exist [Vezzoli’s remake of Gore Vidal’s ‘Caligula’] and I almost got kicked out of the SAG Awards for it. That was the beginning of a friendship – although there was a chance I would never work again,” she said with a laugh.

Jovovich has a movie with Rob Reiner and Woody Harrelson, “Shock and Awe,” coming out next and will be headed to the Shanghai Film Festival in June.

Gallery: All The Looks From The Prada Resort 2018 Show