The Italian luxury goods firm is projecting its profits will grow by an average of 23.5 percent a year over the next five years. 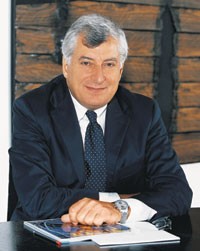 NEW YORK — Prada is thinking big about its future.

The Italian luxury goods firm is projecting its profits will grow by an average of 23.5 percent a year over the next five years, while its sales will increase by an average of 3.2 percent annually, reaching 1.51 billion euros, or $1.83 billion, by 2010, according to a document Prada issued to bankers over the summer and which it released to WWD last week.

The growth will come from increased focus on the core brands of Prada and Miu Miu, as well as labels such as Azzedine Alaïa and Car Shoe. Meanwhile, Prada has formed a new company called Prada SpA Group that excludes money-losing businesses Jil Sander, Helmut Lang and a minority interest in Church’s. These operations now fall under the jurisdiction of other group holding companies.

However, company sources downplayed any imminent sale of Jil Sander. Prada wants to relaunch the brand under the new design leadership of Raf Simons, whose first collections will bow for fall 2006.

When asked for further comment on Prada’s restructuring efforts, chief executive officer Patrizio Bertelli said the following regarding Jil Sander: “The restructuring plan is on course to make the company profitable on an operational basis as early as next year.”

“The Prada and Miu Miu collections were met with overwhelming praise both by the press and the trade. This praise is reflected in the strong orders we have received thus far this year,” the executive said. “It is proof that our efforts on product design and development, production efficiency, effectiveness of the distribution and communications are going in the right direction.”

In typical Italian fashion, a cascading chain of companies control the business. The Prada family and Bertelli hold their stakes through ITMD Investments BV, which in turn owns 100 percent of Prada Holding NV. Prada Holding controls, either directly or indirectly, all the brands and business units, meaning Jil Sander, Helmut Lang, Prada SpA Group and the minority stake in Church’s.

“We have posted strong results for the first six months of 2005,” said Bertelli. “With sales, margins and overall profitability on the rise, I am confident this year will be positive for Prada as our priority remains increasing efficiency in all parts of the value chain.

“Looking back, I believe that 2004 can be characterized as a transition year for the group,” he said referencing Prada Holding’s 2004 net loss of 61.96 million euros, or $75.2 million.

Undoubtedly, the reorganization creates a more attractive set of accounts for Prada to present to the financial community. Armando Branchini, chairman of luxury brands consultancy Intercorporate, said the reorganization is logical. “They want to make it clear what are the businesses that have problems and what are the businesses that are profitable,” he said, adding that improving market conditions overall might make it easier for Prada to sell off Helmut Lang and Jil Sander.

The report states that proceeds from any eventual sale of Helmut Lang, Jil Sander or the minority holding in Church’s would help pay back group loans. The Church’s stake generated 2.9 million euros, or $3.5 million in losses for Prada in 2004. Still, it looks like the group’s focus right now is growing margins at the healthier parts of the company, namely the Prada and Miu Miu brands.

Prada has been busy reorganizing its production logistics to maximize efficiencies. After years of extensive retail expansion, it’s also looking to boost sales at existing stores. At the end of January, Prada SpA Group owned 180 directly operated stores and sales there accounted for 54 percent of the company’s revenue.

The company is also focusing on Asia for growth. Japan accounted for 15 percent of 2004 sales, while the rest of Asia accounted for 13 percent. This year Prada opened in Osaka, the latest example of a retail push there. It also opened in Seoul, where a second store is slated to open in the coming months.

While Prada works to grow its margins and prioritize its brand portfolio, it’s also trying to chip away at the debts it amassed through a series of acquisitions. To that end, Prada booked a gain of about 35.1 million euros, or $42.6 million, on a series of real estate transactions in 2004, including the sale of the Aoyama epicenter store in Japan and retail properties in New York, Chicago and Los Angeles and offices in Milan.

Prada declined to disclose a global debt figure encompassing all levels of the company, but it appears that most of the debt is concentrated at the Prada SpA Group subsidiary and at parent ITMD Investments.

Prada SpA Group’s debts came to 818 million euros, or $993 million, at the end of January, including 420 million euros, or $509.8 million, owed to holding companies elsewhere in the Prada structure. The company’s net bank debt is seen dropping over the next five years until the company reverses into a positive cash position in 2010.

Meanwhile, ITMD Investments owes a group of banks 800 million euros, or $971.1 million. The five-year loan agreement was inked in June, when ITMD had to reimburse a large bond issue. Those bonds, issued in 2001, could have been converted into shares had Prada followed through on a planned stock market listing. Prada has postponed going public four times but Bertelli said the company will start to reconsider the stock exchange at the end of next year.