Can a skirt be installation art? Prada's traveling exhibition "Waist Down" posits that it can. 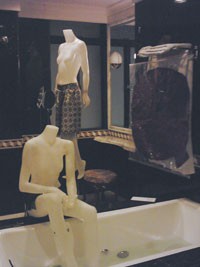 SHANGHAI — Can a skirt be installation art? Prada’s traveling exhibition “Waist Down” posits that it can.

Subtitled “Miuccia Prada: Art and Creativity,” the exhibition opened here on May 17 at the historic Peace Hotel on the city’s famous waterfront Bund. “Waist Down” made its debut in Japan, and after running in Shanghai until Tuesday it will continue on to New York and a yet-to-be determined city in Europe.

Aldo Gotti, Prada’s communication and external relations director for Japan and Asia Pacific, said Shanghai marks the exhibition’s international stop in the Far East. “Shanghai is the most exciting city in Asia, in our opinion,” Gotti said, adding, “Prada has been very quiet in China so far.”

The exhibition runs through several floors of the Peace Hotel, a 12-story Art Deco landmark built in 1929 by British property tycoon Victor Sassoon. In the Thirties and Forties, under its original name of the Cathay Hotel, it was Asia’s most prestigious address and the site of Shanghai’s most infamous parties. Today, much of the original decor remains intact, including its exquisite Lalique chandeliers.

“Waist Down” starts on the ground floor in a corridor lined with two-dimensional cutouts that are two-and-a-half- times life-size versions of skirts in the chronology of their design. The cutouts, with mirrors on the opposing side, also hang in the hotel’s eighth-floor ballroom.

Actual skirts are on display on the Peace Hotel’s seventh floor. In the hallway, some on racks wiggle electronically, while others are suspended from the ceiling over mirrors and twirl. The bulk of the display, though, is in three of the hotel’s famous nine “national suites,” which are decorated in styles deemed Chinese, English, American, French, Japanese, Italian, German, Indian and Spanish. The curators from the Office for Metropolitan Architecture, the Rotterdam-based firm headed by Rem Koolhaas, set up displays in the English, American and Chinese suites that engagingly mix fashion, interior design and history together with a dose of whimsy.

Surreal, translucent mannequins — wearing skirts, of course — loiter about the suites, “reading” magazines or soaking their toes in bubble baths. Several skirts were laid out on or hung up against stretches of fabric for a camouflage effect. In one case, a special bedspread was made from the green and gold tapestries used in a skirt. A few more sheer pieces were hung simply, but behind spotlights creating dramatic shadows, while others were lit from within.

Prada chose the location because, “Mrs. Prada is fascinated with 1930s Shanghai, and loves the movies from that era,” Gotti said.