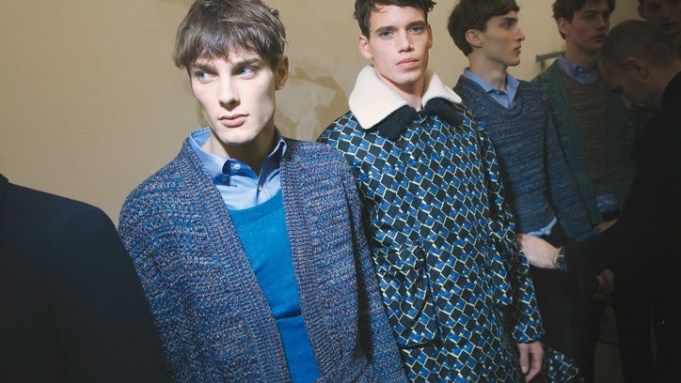 As uncharacteristic as those descriptions may sound when applied to Miuccia Prada, a designer known the world over for her provocative, at-the-vanguard fashion message, that’s the mood she’s channeling these days.

“There’s everything conceivable around us, and I thought the coolest thing would be to do something normal and commercial,” says Prada, describing the inspiration for her fall men’s wear collection. “My intention was to work on nothingness, on banality, on something generic.”

That’s all well and good, but in Prada’s hands, nothing is hackneyed. So those notions didn’t result in mainstream or by-the-book chic, as the designer styled the more traditional looks in a young and disheveled manner, and also infused her lineup with a Seventies edge.

“When we started laying out the base of this collection, I told my team that I didn’t want anything that was too design driven. I’m off design right now, especially in fashion when it’s useless,” she states, sitting in a sparely furnished meeting room in the company’s Via Bergamo headquarters.

“In general, even in furniture, I liked design when it made sense and meant making mass objects that were simple and easily reproducible in big quantities. Now it’s all about one-of-a-kind pieces that are an end in themselves.”

Wearing a navy cashmere sweater, a ciré tan skirt and sky blue, stack-heeled loafers, all from her latest fall collection, the often-reclusive designer looks like the female counterpart of her man.

She may be momentarily steering clear of cutting-edge design, but it’s widely known that both Prada and Patrizio Bertelli, her husband and the company’s chief executive officer, are avid art collectors and were pioneers in contemporary art when they established the Fondazione Prada in 1993. The couple also tapped Rem Koolhaas, the architect behind Prada’s Epicenter stores, to design the museum that is being erected in Milan and to mastermind Prada Transformer, a tetrahedron theaterlike structure in Seoul, that has housed a string of cultural, artistic and fashion events.

But as cutting edge as her taste in art and architecture may be, these days, Prada’s state of mind is decidedly retro.

The first look out at her fall men’s show set the mood—a three-button camel blazer in a double-faced fabric tossed over an oxford cloth shirt and black pants. Imbued with that same flair were handsome navy coats, cozy belted cardigans, raincoats and faux shearlings that Prada nonchalantly tossed over fuzzy shrunken vests and classic shirts.

“I’m convinced that whoever is looking for the perfect Montgomery jacket won’t find one unless they turn to vintage—and even there, the proportions are off,” says Prada. “That’s why we wanted to do the right and perfect classic for today.”

That said, she warns the pursuit of perfection is no easy task, because cobbling a compelling-but-not-boring camel coat or gray blazer is a challenge. “You know, the kind that people will die to have,” she jokes.

As a counterpoint to Prada’s conservative and polite side were a slew of graphic Seventies motifs in bold colors and a new version of the camouflage print served up in orange, white, black and beige, principally used for outerwear.

Prada primarily worked a palette of navy and camel (the latter also turned out to be the hot color for the women’s fall collections), while pink, champagne yellow and teal blue jazzed things up, especially in the form of mélange knitwear.

“The newest thing in fashion today is clothes that you can wear and that real and sophisticated people understand,” notes Prada.

(Speaking of sophistication, she proudly shares that her two sons, Lorenzo, 21, and Giulio, 19, have developed a “very refined” style. “They’re very severe judges, but they understand and appreciate what we do.” Prada quickly adds they still don’t have a say in the collections, as they’re more interested in their own personal styles.)

When unfurling the design process that sets the pace for a new season, Prada says she attempts to distill what’s going on in the world. “I try to focus on what seems to make more sense at the moment because I can’t say I’m inspired by a specific this or that. It’s a continuous process of evolution,” she says.

Prada also details how she struck the right chord with the latest spring men’s ad campaign of stills pulled from a nine-minute black-and-white video titled First Spring, directed by young Chinese artist Yang Fudong. He filmed young men dressed in Prada, as well as in traditional Eastern outfits, for a look that blurs the line between reality and fantasy.

“The men’s campaign always boils down to a debate of whether it’s “too classic, not classic enough, or too edgy,’ because men tend to be more conservative regarding fashion, so we decided to go back to real people—but in a new way,” she says.

As might be imagined, Prada’s fashion vision for her men’s wear has evolved since its launch in 1993. After all, this is a designer who has channeled everything from the big-city life to sexual ambiguity, from cerebral inventiveness to postmodern cavemen.

“Now I’m more concerned that clothes look good and fit right because, above all, everyone wants to look good in what they’re wearing,” she says. Which is why she admits to being less prone to conceptual design these days.

“Fashion can’t just be theoretic anymore. I used to do a square jacket and not really care how it looked. Now I worry that it looks good,” she says.

Is that because men today are more vain?

“I wouldn’t know,” she replies. After a short pause, she adds, “Do you know what I was thinking this morning? That you can’t be liked by everyone, that you can’t target everyone. It’s fine if only some people understand certain sophistications of your work.”