An weeklong installation of fall runway looks are available for special order. 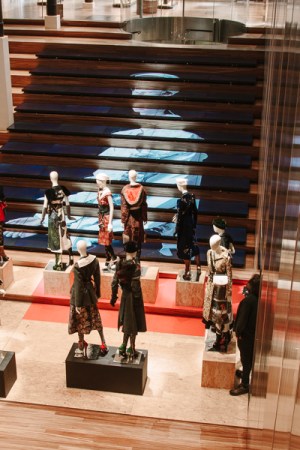 NEW YORK — When the doors to the Prada Epicenter at 575 Broadway in SoHo opened Saturday at 11 a.m., the merchandise anchoring the store as part of a weeklong takeover installation was from the fall collection, a good three months in advance of when it typically hits retail.

Not only that, but many of the items that comprise the 20 women’s looks arranged on mannequins (a selection of fall men’s looks are also on display) are available by special preorder this week only. For example, an orange fur runway coat for $25,635.

The occasion for the installation, called “PradaVision” — which is a kind of guerrilla pre-pre-sale pop-up that features 50 video monitors installed on the store’s famous bleacherlike stairs and graphic wallpaper with illustrations by artist Christophe Chemin, who created drawings used in the fall collection — is twofold. First, it’s timed to Monday’s Metropolitan Museum of Art Costume Institute Gala, which Miuccia Prada is attending as honorary chairwoman, as a way of capitalizing on a big fashion moment in New York. PradaVision is exclusive to the Broadway store.

Second, the fall preview/preorder is key to Prada’s strategy of increased personal service. “One-to-one customer experience is now our project because the general customer experience has to be the highest level possible,” said Stefano Cantino, the company’s group strategic marketing director. “In this market condition it is more and more important to provide the best service possible.…There is a clear expectation from top customers for this kind of special treat.”

During an early April conference call to discuss Prada SpA’s 2015 results, which saw a 26.6 percent drop in profits in the 12 months ended Jan. 31, Cantino highlighted “tailored attention to customer experience by providing outstanding services” as one of the group’s top priorities.

PradaVision is a concrete example.

Typically, the brand hosts two presales a year in its major flagships; the regularly scheduled presale is upcoming in June at the Madison Avenue store in New York. Top clients can see a small selection of the fall collection, try on and order pieces.

With PradaVision, more options will be available during the weeklong program, though the display is the store’s only set of sizes with a few select additional samples. That said, if a Very Important Customer does put in a special order for one of the items in PradaVision that will not be available at the regular presale and will likely not come through production and make it to regular retail, she will have a truly exclusive item ahead of fall deliveries. Orders typically take four to six weeks.

Sales specialists at the Broadway store contacted their top clients to set up appointments for the PradaVision special order, but if a customer  wanders in off the street, it is open to buy for them, too.

The bulk of the women’s looks are set up at the base of the stairs in the store. Customers can walk through the vignette and get a close-up of a navy velvet dress with gold hand-stitching details, the quilted jackets, a cloque dress, argyle socks and diary charms attached to belts. The video installation includes content drawn from the fall fashion shows, backstage footage and other collection-related content produced by frequent Prada collaborators Willy Vanderperre, AMO and 2×4, the New York-based design studio that oversaw the store installation, as well as many previous Prada projects, including Pradasphere, Waist Down and the Gatsby installation.

“The [fall runway] show was so much about fragmented pieces stitched together to make complete looks, so you have a repetition of that idea in a gigantic video collage,” said Michael Rock, founding partner and creative director of 2×4. “The videos are a play on a network. It starts off with these really crazy test patterns and breaks into all these different pieces of the show itself. The installation is meant to work within the fabric of the store, not obliterate it.”

To Cantino’s point of ramping up client services, PradaVision is a special occasion. “It’s a big deal for us,” said one ready-to-wear sales specialist in the Broadway store, noting that while the sales staff works with top clients every season to provide exclusive access, it’s rare to be able to put an order in on a collection so far in advance and have pieces in the store. She also said it’s a big deal any time Miuccia Prada is scheduled to visit the store, as she is for PradaVision — though not as a personal appearance, but to survey the installation, as Cantino made clear.

Other recent initiatives include the 700-square-foot Prada shoe shop that opened in early April at Saks Fifth Avenue’s Manhattan flagship, which had a short-term exclusive on the made-to-order décolleté program, offering 19 styles in seven heel heights, five types of soles and in 92 materials, prints and colors, creating more than 8,000 possible variations. There’s also the Made to Measure Uomo program of tailoring, coats and shirts; Made to Measure Donna Leather Goods available in the Madison Avenue, Las Vegas Wynn and Beverly Hills Epicenter stores in the U.S. and 20 stores worldwide, and the Made to Order Evening program offered at Prada’s Milan villa.

Cantino said even if the special services don’t generate sales on the spot, the cumulative effect is significant. “In many case, if the client does not spend the day of the preorder, maybe she purchases a skirt the following day,” he said. “It is the service that generates a very quality business.”