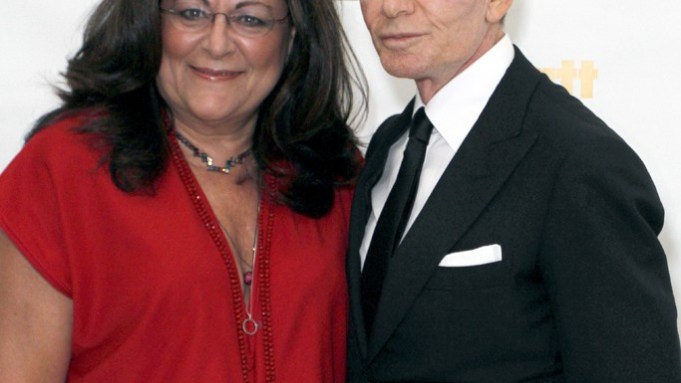 NEW YORK — In presenting the 2012 Pratt Institute Fashion Industry Lifetime Achievement Award to Fern Mallis on Thursday night, Calvin Klein described the important contribution she has made to the fashion industry and how difficult it must have been to referee all those designers, personalities and opinions.

“Her job was not an easy one. A lesser person would have run from the building,” said Klein. As executive director of the Council of Fashion Designers of America for 10 years and later senior vice president of IMG Fashion, Mallis did “so much heavy lifting” behind the scenes in making sure the fashion shows went smoothly, and “designers got the best possible showcase for all their hard work,” said Klein.

He said Mallis was always “fair” and “thoughtful,” and willing to make tough decisions and knew when to say “no” when she had to.

In the last two years, Mallis has reinvented herself, hosting “Fashion Icons with Fern Mallis” at New York’s 92nd Street Y and “Fashion Insiders with Fern Mallis” on Sirius XM’s Stars, as well as recently launching a jewelry line, Fern Finds, on QVC, and appearing in the off-Broadway production of “Love, Loss, and What I Wore.”

Wearing a bright red dress designed by Brandon Sun, Mallis thanked Klein for being there to present her with the award. She said that Klein has supported her from the very beginning when the CFDA was making initial plans to bring the shows to Bryant Park. She described a meeting at the 500 Club when she was trying to convince the designers to show in one location, and they questioned whether Klein would do it. “He did, and said how important it was for everyone to work together and do the right thing,” she said. She also recalled a particular trip to Barbados. When she arrived, she was told that she had a message from Calvin Klein and thought it was a prank. When she called back she found out Klein was trying to reach her. The board had been discussing honoring the late Jacqueline Kennedy Onassis, and Klein said he was going to be seeing John F. Kennedy Jr. and Carolyn Bessette Kennedy that weekend, and wondered whether he should ask them. When Mallis started her series at the Y, the first person she invited to participate was Klein, “and I’ll be forever grateful,” she said.

In a video presentation, fashion designers such as Stan Herman, Peter Som, Betsey Johnson, Tracy Reese, Catherine Malandrino, Norma Kamali and Dennis Basso all praised Mallis for bringing the fashion industry together. Basso recalled the first time he moved his show into the Bryant Park tents, he was scared. When he arrived, there was Mallis at the tent greeting him. He felt like she was the kindergarten teacher.

Jennifer Minniti, chair of the fashion department at Pratt, then introduced the 2012 Pratt Institute Fashion Show. The runway show featured the work of 17 students in the fashion design program. The collections ran the gamut from edgy streetwear with leather effects to a cheeky anti-smoking PSA to eveningwear that literally lit up. The strongest work came from Kelsy Parkhouse, whose quilted patchwork ensembles were folksy yet sophisticated and completely distinctive from the collections by her peers. It did not go unnoticed: Parkhouse was awarded the first ever Liz Claiborne Award — Concept to Product, which came with a $25,000 cash prize.

In addition, Kate Wilkoff and Meredith Lyon were awarded the opportunity to participate in the Supima Design Competition. These two seniors were invited to create a capsule collection made of Supima fabrics at Mercedes-Benz Fashion Week in New York this September. Competing with students from other design schools, the winner will receive a $10,000 cash prize.

“I’m very impressed,” said Klein, after the student fashion show. “These students did mini-collections. They were inventive, cohesive and beautifully made. They are gifted.” Asked how one makes the leap from being a talented student to becoming a successful fashion designer, Klein said, “It’s consistency. You have to keep doing it. You have to reinvent yourself a lot. And it takes staying power.”