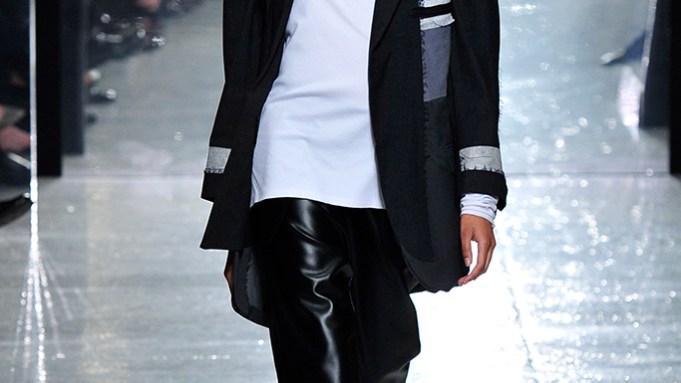 “Hopefully I won’t screw it up too much,” said Rose Byrne, who had a case of pre-show jitters before she was due to present the Pratt Visionary Award to Francisco Costa, creative director for women’s wear at Calvin Klein, on Thursday night at Pratt Institute’s 116th annual graduate runway show held at Center548 in Manhattan. “You’d think I wouldn’t be [nervous] because I’m an actress, but I find these things a bit intimidating, Byrne said. “But I’m looking forward to it and I’m honored. It’s a different world for me and such an iconic place…I was very excited when [Pratt] asked me [to present].”

The Australian actress, currently shooting “X-Men: Apocalypse” and gearing up for the June 5 release of “Spy,” met Costa — who was being recognized for his two decades of excellence in the fashion industry, including his 13-years-and-counting tenure at Calvin Klein — during her first red carpet experience at the Emmy Awards in 2008. “He’s such an iconic designer and so intelligent with his work, but he’s also a really nice person,” Byrne said. “I felt safe in his hands.”

Costa, who dressed Byrne for this year’s Met Gala, also attended the graduate runway show at the Fashion Institute of Technology last week. “I remember, when I first arrived [here] and I went to FIT, New York always embraced me in a super great way. I try to get myself engaged [with the students] as much as I can,” he said, calling the Visionary Award humbling. “I always regard Pratt as one of the greatest art and design schools in the world,” he said. Past recipients of the award include Diane von Furstenberg, Thom Browne, Ralph Rucci and Narciso Rodriguez.

At 6:30p.m., about 400 guests, including Yeohlee Teng, Italo Zucchelli, Bibhu Mohapatra, Gabi Asfour, Fern Mallis and Peter Davis, trickled into their seats. “I do have to thank our students because they are young creative geniuses,” said Jennifer Minniti, chair of the school’s fashion department, in her opening remarks. “I want to thank them for their commitment, their dedication, their confidence. What you’re about to see here tonight is commentary on their time…This is fashion now.”

Dubbed “Laboratory,” the runway show, sponsored by Cotton Incorporated and Santander Universities, highlighted experimentation with unconventional draping, cutting and construction techniques and featured highly conceptualized men’s and women’s collections from 16 of Pratt’s graduating seniors. Each student showed several looks, with each new grouping signaled by a dimming of the lights and a new song thumping through the speakers. Two students were recognized for their exemplary work: Sophie Andes Gascon from Manaus, Amazonas in Northern Brazil took home the Cotton Inc. award and Claire McKinney from Lake Oswego, Ore. won the Liz Claiborne Concept to Product award, which awarded her with $25,000 from the Liz Claiborne and Art Ortenberg Foundation.