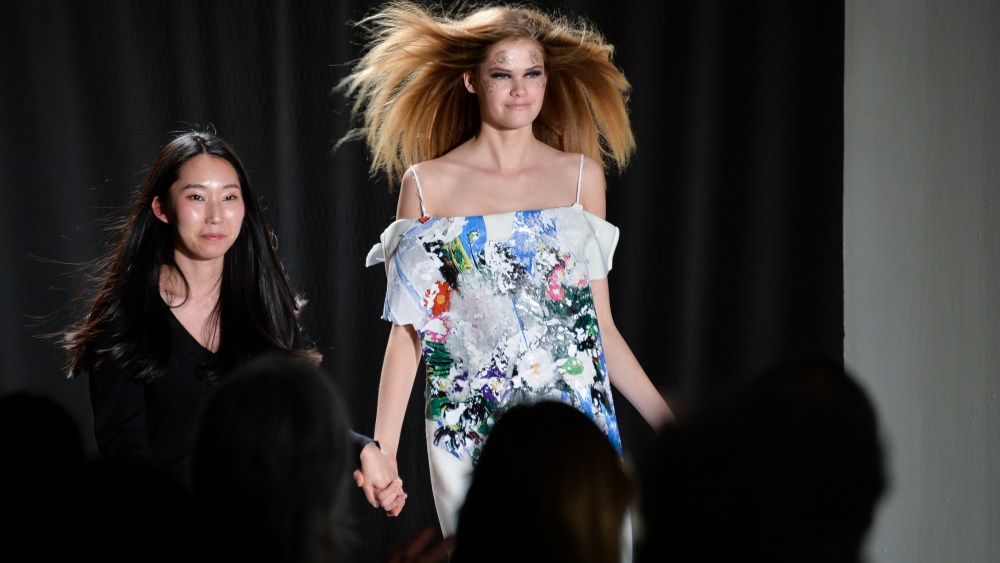 For someone due to receive a Lifetime Achievement Award in a matter of moments, Harold Koda was the essence of calm at Pratt Institute’s 117th annual graduate runway show at Spring Studios on Thursday night. “It’s so mind-boggling,” said Koda, who stepped down from his position as curator in charge at the Costume Institute at the Metropolitan Museum of Art back in January. “Because, why me? I keep thinking that most people who have really great careers have done it with intention and focus. But [my path] was so wishy-washy…I thought I was going to become a civil liberties lawyer.”

As it turned out, Koda’s self-described “hippie, leftist” heart kept him from the “dispassionate way of thinking about the law” required to be a lawyer — he found himself getting too attached to the human stories in each of his cases — and he retreated into the world of aesthetics instead, going on to curate renowned exhibitions such as “Charles James: Beyond Fashion” and “Schiaparelli and Prada: Impossible Conversations” during his 15-year tenure at the Met.

Simon Doonan, Barneys New York creative ambassador at large, had the honor of presenting his longtime friend Koda with the award. “Harold has always been a deliciously humble dude,” Doonan told the crowd. “Harold once said to me, ‘When I sit with friends in New York and listen to their banter, I always feel like an eunuch because I don’t have the edge that they have. I was raised in Hawaii, where there are no threats and no natural predators.'”

During his thank-you speech, Koda offered some advice to the budding fashion designers in the room. “The one thing that every student should know or feel at this moment — when the whole fashion industry is undergoing some extraordinary seismic shifts…is that if you look back, you should be able to say that at every moment in your career, you were doing something you loved — or if you weren’t doing something you loved, you were doing something that you didn’t love, but that was positioning you to do the thing you love,” he said. “Fame, fortune are very nice. A really glamorous Instagram account is really nice. But what you’re going to find satisfying is that your career has been based on passion. Surprisingly, when you get that, you might get fame, you might get fortune and you might get a selfie with Kanye…but that’s all gravy.”

Kim walked off with the grand prize. Jennifer Minniti, chairperson of the school’s fashion department, called the young graduate up to the podium to present her with the “Liz Claiborne Award — Concept to Product,” a gift of $25,000 funded by the Liz Claiborne & Art Ortenberg Foundation, which should help cover the costs of developing a collection after graduation.

Kim and her fellow seniors already have their fans, though. “I just appreciate all the work that goes into [the show],” said Thom Browne, who had a front-row seat. “It’s so refreshing and it’s so charming to see.”