The Premiere Classe accessories fair, which ended its four-day run here Monday, reflected an optimistic retail outlook for next summer with budgets up by as much as 30 percent. 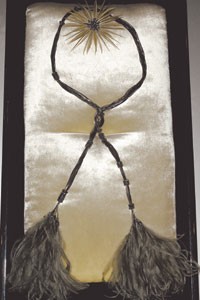 PARIS — The Premiere Classe accessories fair, which ended its four-day run here Monday, reflected an optimistic retail outlook for next summer with budgets up by as much as 30 percent.

Buyers reported that the poor euro-dollar exchange had encouraged a more focused, sophisticated approach, rather than limiting spending.

“It makes you a better buyer,” said Brian Bolke of Forty Five Ten, a high-end store in Texas, who was shopping for bags. “You want to buy the perfect item.”

Many buyers lamented the lack of newness in accessories, although “some of the handbags showed promise,” said Sandra Wilson, accessories fashion director at Neiman Marcus. “As evidenced by the runway, bags are going to be especially popular for spring,” Wilson noted.

Like the fashion runways, handbag collections lacked a unifying direction —not that there’s anything wrong with that.

“We’ve seen everything, from constructed to unconstructed bags, small bags, big bags. There is not one particular bag, not one singular trend, which is great for us retailers,” said Robert Burke, senior vice president of fashion at Bergdorf Goodman.

Burke cited color and vegetable dyes, such as those seen at Milan-based Henry Beguelin, as a trend for next season.

“The American lady wants to get her credit card in a hurry and God forbid she misses a phone call,” quipped Christopher Fischer, buying for his four eponymous U.S. stores. Fischer stocks mostly cashmere, but said he would double his spend on snake and python handbags, which proved popular this year.

British buyers showed more caution. Eddie Knevett, who’s been buying leather goods for department store House of Fraser for 15 years, said spending is up 5 percent and he praised exhibitors for taking a more commercial approach. “The colors are easier, more toned down with fewer egos,” he said. “The way we buy has changed. We buy much closer to the season as there is constant newness. Trends are much faster —we’re buying 365 days a year.”

Retailers also mentioned a trend toward more natural, muted colors in jewelry, with a continuing ethnic theme that is becoming more sophisticated and more feminine. Neiman’s Wilson observed some shorter necklaces and others with interesting charms.

The boundary between jewelry and scarves is becoming less clear, with fabric-beaded necklaces at Chan Luu, silver cuffs added to scarves at Yomo and chain fabric necklaces at Alexis Bittar.

John Eshaya, buying for Ron Herman Fred Segal stores, was impressed with antique-tiara-shaped diamond rings at Japanese-based Noguchi, exhibiting at Premiere Classe for the first time. “This [Noguchi] is different compared to everything else,” he observed. “Everyone’s still doing those huge beads — I mean, enough already.” Eshaya noted he is confident for next summer and plans to increase his spend.

Exhibitors cited good order-writing. “This is our strongest season,” said Cristina Portale Coco at Henry Beguelin. “Paris is becoming a bigger market. Sixty percent of our orders are made in Milan and 40 percent are here.” Her bestseller was a large off-white leather bag wholesaling for 330 euros, or $395 at current exchange, with tassels and sewn-on African trading beads.

Lemarié, the couture feather house owned by Chanel, unveiled its first jewelry collection. Designed by Eric Charles-Donatien, the brooches, rings, necklaces and bracelets made with silver and ostrich or goose feathers, range from 25 euros, or $30, to 650 euros, or $779, wholesale.

Organizers said 12,300 buyers attended the fair, a 14 percent decline versus a year ago, but up 1.5 percent compared with last March.