If premium denim is having any slowdown, the news hasn't reached the models stalking the runways during fashion week here. 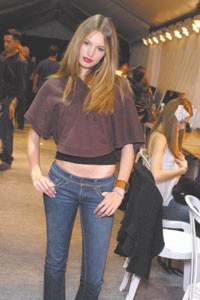 PARIS — If premium denim is having any slowdown, the news hasn’t reached the models stalking the runways during fashion week here. Once out of their catwalk finery, they slip into their favorite dungarees to rush to the next show.

“I always want jeans that other girls don’t have,” said Heather Marks, sporting her Sevens backstage at Emanuel Ungaro on Wednesday. “But they’re hard to find.”

“I have so many jeans,” she continued, adding most brands fit her well.

“I have long legs, and many jeans come in long lengths. The girls are getting taller, and the jeans are getting longer,” Marks said.

Still, some models claimed even they have fit problems. Snejana Onopka, wearing Versace jeans, said, “I have a big problem finding jeans because I am tall and have long legs.”

Regardless, there’s no slacking off on the jeans front. Spotted backstage were Carmen Kass in her Ralph Laurens, Emina Cunmulaj in her Hollisters, Mona Johanesson in her Diesels and Julia Stegner in her Dundups.