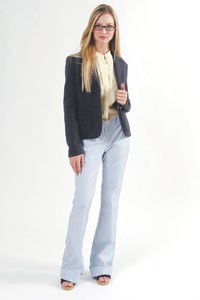 NEW YORK – Every spring, many private school seniors go through one very important rite of passage: tossing their much-loathed prep uniform in the garbage or shipping it to the local Good Will. It’s odd to them that the classic Waspy garb of khakis, button-down shirts, navy blazers and V-neck sweaters is a major fashion perennial into which legions of people – from style-savvy public school teens to Manhattan’s wealthy elite – buy.

“I never understood why someone would choose to be preppy if they want to be fashionable,” grouses Lauren Citrome, a senior at Connecticut’s exclusive Choate Rosemary Hall, where she writes the school paper’s “Fashion Forward” column – often bemoaning the conservative dress code.

And yet, prep is perpetually in a state of renaissance. Lisa Birnbach, who edited the seminal, now legendary, book “The Official Preppy Handbook” 25 years ago, says, “Prep is like a palette cleanser between trends. It’s clean-looking, simple.” But this isn’t just revisiting Muffy’s and Biff’s wardrobes. Designers are taking that signature motif and subverting it ever so slightly, similar to Frida Giannini’s sexier take on the classic rugby chez Gucci. Just like those restless private school kids who personalize their uniforms with a bold necklace and wacky socks when the dress code allows, designers are adding outside elements to the mix.

Tommy Hilfiger says preppy is a look that never really goes away – it just pops up now and again, each time a little different from the last. “It’s a little slouchier right now and a little bit more luxurious and colorful,” he notes. “And it’s not just for the Waspy crowd anymore.” This past summer, Hilfiger took note of how youngsters were wearing their Nantucket reds – “four sizes too big, à la hip-hop.”

Part of prep’s popularity has to do with its mercurial ability to mix with other styles. “To reference it is very interesting,” says Julie Gilhart, vice president and fashion director at Barneys New York. “Even Balenciaga has a V-neck sweater with a little B on it.” And she stresses the importance of customizing everything. “The original prep is very precise, thought-out – to be part of the club, to be the same. But in today’s vernacular, it’s not about that,” she says.

Saks Fifth Avenue’s Michael Fink offers Burberry Prorsum’s spring 2006 collection as a perfect example of the new prep. “It was a little saccharine, but there was an edge, a melancholy, to it,” he says of designer Christopher Bailey’s hip-to-be-square lineup of polished cardigans, high-waisted dresses with ribbon belts and brass-buttoned navy coats. Bailey himself maintains that “many things can be defined as preppy, but it’s always about taking the foundations of a familiar wardrobe and giving it a character.” For him, it was channeling England’s prep poster child, Princess Margaret, circa 1968.

While sister Brit Luella Bartley, also a loyal fan of Princess Margaret, typically espouses the country club life on and off the runway, she distorts it with another theme, most often a rock ‘n’ roll one. “My favorite thing is to wear a crisp white shirt and a V-neck cashmere sweater, but then pair them with drainpipe jeans,” she observes of her personal wardrobe. “It’s subverting it a little bit.” And it’s a trick she employs in her collection. Case in point: spring’s pressed watermelon pink oxford tucked into a green pencil skirt covered in sequins, to glam effect.

Even prep’s most recognizable status symbol, Ralph Lauren’s tried-and-true polo player logo, got a fresh update last summer with its new supersized dimensions. Lauren, of course, has built an empire based on an idyllic world in which a real polo player gallops around perfectly manicured lawns on an estate of ivy-covered mansions and stone walls. And he just further expanded that reach by opening his first freestanding Rugby store in Boston. The designer basically wrote fashion’s own preppy handbook, an influence that hasn’t gone unnoticed by fellow designers like Bartley, who thinks Lauren is the ultimate prep icon. And he’s inspiring a new generation, as well. “I’ve been looking to the way that he’s managed to create and sustain such a powerful identity,” notes San Francisco-based newcomer Josh Podoll. Shoppers, too, know Lauren’s the go-to guy for a quick prep fix: At Saks Fifth Avenue, his cableknit business is off the charts, according to Fink. Gilhart adds, “Ralph is completely aspirational to that sort of perfection of style, which is really what prep is about.”

Like Lauren, Bartley and company, there’s a batch of new designers who are enrolled in the prep school, but they’re not taking it too seriously. More interested in the mischievous lass who swipes her younger brother’s shrunken blazer, José Ramon Réyes mixes staples such as that blazer and navy peacoats with tiny shorts and minis.

“I love the juxtaposition of what we think is prep with something more interesting, less literal,” he says. Réyes spent 12 years loathing his grade school uniform of khakis, a white oxford, navy tie and loafers at Colegio Babeque, a Catholic prep school in his hometown of Santo Domingo in the Dominican Republic. But, ironically, it’s something he can’t seem to shake. “I hated the uniform, especially the pleats on my trousers. But now that I’m older, I seem to be wearing a similar look – of course, pleatless.”

Podoll is experiencing a prep school redux, too. A fine arts-trained painter who started a T-shirt line in 2002, Podoll finds himself channeling his school days with his collection, recently expanded to include more ready-to-wear. He attended Iowa’s Maharishi School of the Age of Enlightenment, a well-known hippie high that nevertheless dictated an old-school uniform. Thus, the girls’ green-and-white plaid pinafores and boys’ white shirt and khakis left an impression on Podoll’s design psyche. “I think everyone who’s [designing prep] went to private school,” he says. But Podoll’s vision comes with a major dose of tongue in cheek, like a crisp, button-down shirt embroidered with a giant mermaid, or a pair of fine cotton trousers in an oversize madras. “It’s sort of ridiculous,” he says. “You’ve got to have some nerve to wear those pants. They’re over-the-top preppy.”

There’s an explanation, says Birnbach, for Podoll’s and Réyes’ return to schooltime fashion statements: Once a preppy, always a preppy. “You can run and kick and scream and wear black, but ultimately, you’re going to end up prep,” she says. “When Ben Affleck dated J.Lo, he was saying, ‘I can’t be this anymore; I have to break into something more exotic.’ But it was just a phase.”

Trovata’s John Whitledge, Sam Shipley, Josia Lamberto-Egan and Jeff Halmos haven’t deviated from their tony upbringings. Rather, they threw some surfer’s laissez-faire into their line, turning it into one of the hottest around, now in its third year and a recent winner of the $200,000 CFDA/Vogue Fashion Fund award.

“Prep’s very classic, so it spans across all generations. That can’t be said of many styles,” says Whitledge, noting that everyone from school kids to thirtysomethings to grandparents can wear the preppy look. “It really does define the casual American lifestyle.” The quartet designs jackets, sweaters and T-shirts to look well worn, like pieces that have been continually patched and repaired over years. “These clothes have been passed on through generations,” explains Whitledge, a boarding school grad of Pine Crest in Florida. “Sort of like old money in decline.”

Birnbach notices all these changes in the prep mentality, updating itself in order to remain relevant. “I remember the old Abercrombie & Fitch,” she says. “It was about Theodore Roosevelt and buying extraordinary custom cases for your guns and bullets, not sexy, low-cut wrinkled cargos.”

But it’s hard to find a designer or fashion executive who will label prep a trend. “Classic is always in,” clarifies Jeff Pfeifle, president of J. Crew, where Nantucket is less a vacation destination than a mentality. He’s confident that should popular taste shift away from prep’s current fashion-y, customized motif, there will still be a market for cashmere sweaters and chinos.

Yet, for all these changes in the prep landscape, the core of the look remains: pressed khakis; V-neck sweaters in every color; the blazer with brass buttons; polo shirts – popped collars optional; a single strand of pearls for women, and boat shoes for men. These are constant. “It gives people a sense of order in the world. It’s the idea of comfort and stability,” says Podoll.

Fink agrees. “Up until now, everything has been very girly or very overdesigned, and we need a resting moment with some pure classics – they’re things you trust.”