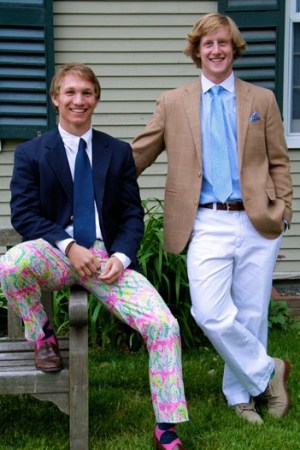 For girls, it’s the “two-layer” rule of top (shirt plus sweater), with an at-the-knee skirt or tailored pants. School motto? “Be worthy of your heritage,” which dates to the school’s founding in 1797. Along with an unabashedly preppy fashion sense (lots of seersucker and madras), this school of a little more than 600 students balances top academics against a truly rabid rivalry with Choate Rosemary Hall in Wallingford, Conn.

Famous alums run the gamut — from Matthew Fox from TV’s “Lost” to King Abdullah II of Jordan, who resided with his bodyguards in his own house during his school days. During the Deerfield school year, students get the run of 90-plus acres, attend three sit-down dinners a week in dress code and turn out for two formals.

WWD asked junior Mackenzie Swirbul to photograph some of her well-dressed male friends on campus as they finished out their prep school careers. They graduated May 28 in the school standard of navy blazer and green-and-white school tie for guys.

Style m.o.: “I’m not afraid to look superpreppy, but I have fun with it. About one-third of my closet is really outrageous and colorful, and the rest is more classic,” he says.

Cracks the code: With color, like a raspberry blazer by Latham House. He’s also got a penchant for wild socks. It started as a family joke about simply getting “a nice pair of socks” for Christmas, but it struck Weidner — who has worn school dress code since kindergarten — as an unexpected way to get color into the uniform. He loves these wild argyles with the matching Lilly Pulitzer pants (pictured).

Style m.o.: A preppy-dapper two-season athlete (hockey and lacrosse), Logie counts Ralph Lauren as an “absolute favorite. I could dress in him head to toe every day.” Logie is one who revels in the details: belt, shoes, Tiffany cuff links, tie that turns a daily look from “dress code” to distinctive. That is, this is the effort he makes on mornings when he’s had enough time to fold a pocket square — “kind of a pain when you’re running late to class,” he says.

Cracks the code: With shorts, sweater vests, hand-tied bow ties. Before the spring formal, Logie had classmates lined up outside his dorm room waiting for help getting their bow ties properly knotted.

Favorite accessory: Boxer shorts in Italian fabric that mom (designer Liz Logie) made from remnants of the namesake line she sells to Mitchells and Neiman Marcus.

Attending next year: University of California Santa Barbara as a baseball recruit

Cracks the code: With unexpected brights (like his canary yellow Sperry Top-Siders) and pastels in unusual combos. Though this is his first year on the East Coast, he picked up a pair of Nantucket Reds that have become a favorite — when he wears long pants, that is.

Swirbul, a Darien, Conn., resident who is second-generation Deerfield, dodged this term’s athletic requirement by using her photography skills for the campus magazine. Not (quite) as preppy as her guy friends, Swirbul likes Urban Outfitters, Free People, Shopbop.com, Forever 21 and relies on J. Crew cardigans to hit the “two-layer” rule.