With new showrooms, events and expanded space, the Los Angeles marts get ready for showtime. 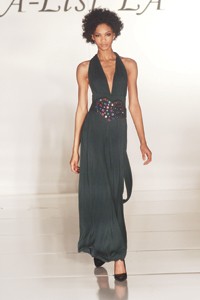 With new showrooms, events and expanded space, the Los Angeles marts get ready for showtime.

LOS ANGELES — Organizers and local buyers are eagerly anticipating the addition of a new trade show — and a spate of new showrooms — to future markets here.

Mezzanine, an ENK International show that launched at New York’s Coterie trade show a few years ago, will bow at Los Angeles’ majors market in October. (ENK already stages Brighte, which features contemporary, bridge and misses’ apparel, on the bottom floor of the California Market Center.)

Mezzanine specializes in “high-end designer and contemporary apparel,” said an ENK spokesman. The show features women’s and men’s apparel, footwear and accessories. Although exhibitors for the first Los Angeles show have yet to be finalized, past vendors have included Imitation of Christ, Morphine Generation, Ed Hardy, Burning Torch and Buddhist Park.

Furthermore, “It’s edited for a specific retailer,” he said. “A buyer like Fred Segal could come in and know that everything is right for their store.”

The show, which the spokesman said will feature around 100 vendors, will move into the Old Stock Exchange building downtown. It is a cavernous historical structure located a short drive from the complex of buildings that typically house market vendors: the CMC, the New Mart, the Cooper Design Space and the Gerry building. “We’re trying something new. We’re breaking the rules.”

The New Mart, located across the street from the CMC, also unveiled a clutch of showrooms in the past few weeks — including a space for premium denim company Hudson Jeans, which had previously shown at Designers & Agents.

“We made the decision to go corporate with our sales staff and open our own showrooms in New York, Dallas and Los Angeles to have the ability to better serve our accounts and ultimately control the distribution of our product,” said Rick Spielberg, vice president of Hudson. “Our own space also allows us to effectively convey Hudson’s brand image and showcase our product in an aesthetically complementary environment.”

Other New Mart additions this year include showrooms for contemporary designer Charlotte Tarantola and Stitch’s premium denim, and a forthcoming Halé Bob showroom.

Kay Savacool, who handles administration for the New Mart, said sales representative Brian Wilson — who represents My Tribe, BUnited, Raw 7, Crimes & Misdemeanors and Sargeant Pepper denim, among others — is currently in a temporary space in the building, awaiting the revamp of his eponymous showroom on the eighth floor.

Trade show organizers said buyer attendance continues to increase each year. International attendance at recent markets has grown commensurately with Los Angeles’ growth as a capital for contemporary fashion, according to John Kim, general manager of the CMC. Though he declined to release attendance numbers, Kim said they have “been consistently increasing over the years, and we are anticipating continuing on that upward trend.”

The building has undergone a few nips and tucks in the past year.

“We completed a massive renovation to our penthouse floor,” said Kim. “It’s now the largest exhibition space in downtown L.A., next to the convention center, and [has] 110,000 square feet of stylish, open event space.” So far, the penthouse has hosted the Transit shoe show, the L.A. International Textile Market and the new Glow lifestyle show.

According to Kim, the CMC plans to increase the number of parties and events the staff hosts during markets. For starters, Kent Smith, executive director of the Fashion District of Los Angeles, said his organization — in conjunction with the four showroom buildings — is planning to throw a private party for buyers on the corner of Ninth Street and Los Angeles Boulevard on Oct. 20. Street-side tents will be erected for the event, which Smith said is in celebration of “what goes on at L.A. market. It’s a way to thank buyers for coming.” Organizers hope to make the party a regular event.

Meanwhile, D&A, which inhabits the New Mart and the Cooper Design Space during markets, will add a men’s wear component in August. “We want to bring modern and hip menswear to the trade show circuit,” said show co-founder and co-producer Barbara Kramer. “Brands like Earnest Sewn, Vintage Disney and Stronghold already show in women’s, so men’s is a natural next step.”

Ed Mandelbaum, Kramer’s co-producer, said the fashion-forward show likely will see an increase in its number of

vendors over the next year — but will be careful not to

expand to a point that could capsize the show’s vibe of hip exclusivity.

“We could be five times as large as we are,” Mandelbaum said, “but our direction is not to be the very biggest, but the best contemporary-young designer trade show in the world. If we got bigger too quickly, it would mean we were letting [the wrong] people in.”

Buyer attendance at D&A has increased roughly 20 percent every year. Around 2,000 stores walked the June show, up from 1,686 the previous year. Mandelbaum said he predicts buyer attendance over the next year will only increase.

“Los Angeles has clearly been getting more traffic,” he said. “I think the whole contemporary market and denim and casual, a lot of that is out of L.A. Also, people love coming because it’s a fun city.”

Mandelbaum said he worries less about the number of attendees and more about the caliber. “The traffic that comes into our show really buys from its products. We don’t need 15,000 people coming through if they’re not the right ones.”

“We’re now on the international timetable. The old dates occurred when buyers [already] had stopped buying. Now more people can exhibit in L.A.,” he said, “and more people can shop L.A.”