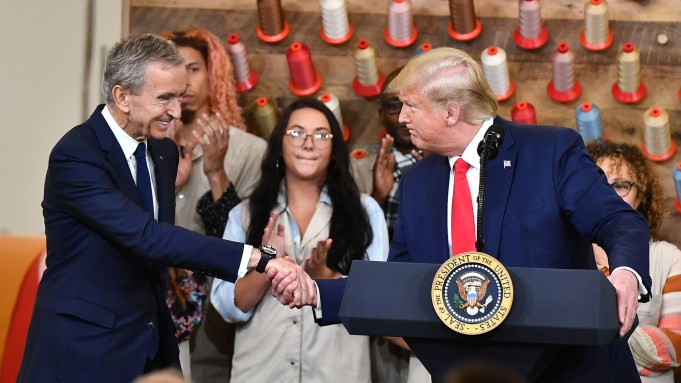 “This shows two commitments: One, the commitment of LVMH to the American market, and two, the commitment of President Trump to the American worker,” Arnault said in his remarks at the workshop employing 150, noting that the U.S. is the most valuable market in the world for LVMH, and represents 25 percent of its total business, or more than $10 billion a year. The firm’s investment in the U.S., including salaries and taxes, is over $1 billion, he added.

“I have always been close to the U.S. since the beginning of the Eighties when I lived here. You remember that France, a beautiful country, was becoming a little bit socialist at the time, and so I tried to find a country where business was welcome. So I lived here in New York, and that’s where I learned to do business in the American way, the efficient way,” Arnault continued.

Though he stopped short of calling Trump a friend when asked by WWD earlier, he shared that their relationship goes back to the Eighties when he first met the-then real estate developer socially in New York. “We are very honored to have the president of the United States. I’m not here to judge any types of policies,” said Arnault. “I’m here to work with my brand and we are going to, over five years, have 1,000 people working here and that’s what matters.”

“You are a great businessman but also a visionary…you are an artist, really, and this is a great vision you have for the state of Texas,” Trump said in his prepared remarks after touring the factory, where workers, some speaking Spanish, were sewing Louis Vuitton Neverfull and Artsy bags under American, Texas and French flags. “Louis Vuitton is a name I know very well; it’s cost me a lot of money over the years,” the president joked, even as he mispronounced the brand’s name. After the crowd of about 150 cheered, he enthused, “They like me in Texas!” Johnson County, where the workshop is located, voted 77 percent in favor of Trump in the 2016 election.

The president helicoptered in on Marine One, but that didn’t stop supporters from lining the two-lane road to Rochambeau Ranch, wearing their Trump finery, down to the red-white-and-blue Trump logo sneakers and rhinestone “Women for Trump” hats.

“It was just a big, big, big secret. They kept the whole thing secret,” said Linda Owens, a retiree from Alvarado, Tex., of the workshop, which opened last June.

Jobs creation is key to the economic platform of the president, who is facing an impeachment inquiry in the House of Representatives stemming from allegations he and his administration pressured the leader of the Ukraine to advance his personal interests and his re-election campaign. The event at the Louis Vuitton factory coincided with a Trump fundraising swing through North Texas that culminated in a “Keep America Great” rally in Dallas on Thursday night.

Purchased in September 2017 from a Dallas surgeon, the ranch was known as Rockin’ Z before LVMH selected it for the location of its third workshop in the U.S. It came with a prairie-style stone house built in 1984, that has been kitted out with Louis Vuitton trunks, books and home accessories for Thursday’s festivities. The ranch manager, Randy, even came as part of the deal, and he tends to the small herd of cattle that members of the press were introduced to during a golf cart tour where inappropriate ranch footwear abounded. (No, the cattle are not going to be used for handbags.)

The 100,000-square-foot factory sits on 265 acres of hilly, deer-stocked land LVMH named Rochambeau Ranch after the French general who helped the 13 colonies win independence during the Revolutionary War. Efforts were made to preserve the natural landscape at the facility, which has its own water treatment station, LED lighting for lower energy consumption, floor-to-ceiling windows to allow natural light into work areas, and a commissary with screens that show Louis Vuitton runway show footage on a loop.

The meeting between Arnault and Trump comes at a time when consumers are increasingly sensitive to brands’ political values, whether it’s an NBA general manager tweeting support of Hong Kong protesters, or Nike using Colin Kaepernick as the face of an advertising campaign.

“It’s about jobs, it’s not a political statement,” Louis Vuitton chief Burke insisted. “This is about engaging with the president of the United States’ overriding economic goal of bringing jobs back to the United States…it’s ironic that it’s a French company that’s doing it. There’s a subject…for those who want to be critical. Once again we’re helping out America. That’s what friends are for.”

When pressed about any potential backlash that could result from the photo op between Arnault and the divisive president, either among customers (there is already some outcry on social media), or his own designers, such as Virgil Abloh or Nicolas Ghesquière, and celebrity endorsers like Rihanna, Burke replied, “Social media is part of a democracy…It contributes to polarization. We’d like to diminish polarization. People are in echo chambers due to the technology that surrounds us. All the algorithms are destined to feed us what we already know. We think there is danger there. It tears society apart. Engagement is the key word. Democracy is about having different options and having the means to engage with the other side. Not engaging is a really difficult way to make changes.”

Politics aside, the opening of the workshop in June fulfills soaring demand in the U.S. for Vuitton products, the executive said.

Burke said what’s being crafted in the new Texas facility are bestsellers and classics, not more complicated styles, which will be introduced in the next couple of years as workers are trained (“we pay a multiple of minimum wage,” he added). “Ultimately, we’ll be able to make anything, including cowboy boots,” he said, brandishing his own custom pair made in El Paso. “The leather, the zippers, the thread, the canvas are from France, even the machines are the same ones we use in France,” he said of the workshop’s materials.

Another goal in opening in Texas was to simplify the supply chain. “It’s easier to get raw materials to Dallas than to California,” he said, adding that there are no other countries he would consider opening workshops. “Before the war, if you wanted to be present in America, you had to have local manufacturing. You forget how difficult trade could be,” he said of the history Louis Vuitton has had manufacturing in the U.S., which stretches back 30 years. “We decided if that was the case, we’d be better off owning the factories…it’s the product of a historical circumstance. You can’t take the U.S.-French situation and replicate it around the world.”

Arnault has shown an ability to play U.S. politics across party lines. In 2011, he met with President Barack Obama at the White House while he was in Washington, D.C., to receive the Corporate Citizenship award from the Woodrow Wilson International Center for Scholars. “I think he is really committed to creating jobs in America, and I explained to him that we have created jobs in California with one of our ateliers, and also in Napa Valley, where we are producing wine in America,” Arnault told WWD at the time.

He first floated the possibility of a Louis Vuitton factory in the Carolinas or Texas during a January 2017 visit to New York to meet with the president-elect at Trump Tower. (Arnault also attended the first Trump state dinner in 2018 for French President Emmanuel Macron, whom Trump ribbed in Thursday’s ceremony: “Sometimes we have disagreements with Emmanuel, say hello to Emmanuel,” he said to Arnault.) In the end, Alvarado won Project Mustang, as it was known before the land purchase  became public in September 2017, in part because Louis Vuitton was attracted to the cattle ranching country, which it may tap for hides in the future. Burke even suggested that he could export American-made leather goods someday. “I would consider it.”

Johnson County commissioners approved a tax abatement of 75 percent to recruit Louis Vuitton, while Texas Gov. Greg Abbott, through the Governor’s Enterprise Fund, awarded the company $860,000 and a capital fund grant award of $1.1 million for construction, according to local newspaper the Cleburne Times-Review.

In addition to satisfying the luxury giant’s desire for more production capacity in the U.S., the workshop makes good on a commitment LVMH made to bring new jobs to the U.S. as part of its support of the White House’s Pledge to America’s Workers educational training initiative launched in 2018.

Apple, FedEx and Boeing are among the 300 companies that have signed onto the effort, spearheaded by Ivanka Trump, with an aim of creating six million jobs-training opportunities. The Pledge to America’s Workers has given participating companies face-time with her and the president, sometimes while the White House has been considering trade policies that could hurt their business interests.

While Trump praised Arnault’s job creation in Texas, LVMH has also been hit by the president’s tariffs against imports from the European Union over subsidies to Airbus. The administration last month slapped tariffs on French wine and Scottish whisky, although it did exempt French fashion and Champagne. LVMH owns Glenmorangie, as well as Moët & Chandon, Ruinart and Château Cheval Blanc, among others. In 2018, American shoppers bought $12.4 billion worth of LVMH goods.

First Lady Melania Trump has worn several LVMH brands — Christian Dior and Fendi among them — and her personalized Louis Vuitton luggage set has been photographed being carried onto Air Force One. She did not attend on Thursday, but Ivanka Trump looked fashionable in a sculpted white jacket, black cigarette pants and high heels, with a Grace Kelly-like hairdo.

The U.S. entourage at the event also included Energy Secretary and former Texas Gov. Rick Perry, who just resigned his post as energy secretary earlier in the day, Secretary of Commerce Wilbur Ross, and the U.S. ambassador to France, Jamie McCourt.