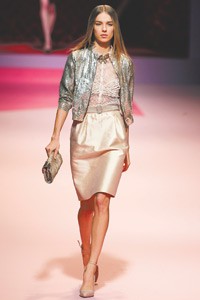 There’s nothing wrong with pretty clothes, and a number of designers and houses demonstrated it this season, creating winning looks in that vein.

Gianfranco Ferré: There was no mistaking Gianfranco Ferré’s big message for spring: shorts! And the shorter, the better, paired with cropped jackets and heraldic crest tanks. His fascination with the item meant an out-and-out treatise, one that included athletic striped shorts and tap pants trimmed with delicate lace. Even if venturing from nautical fare into the boudoir with featherweight teddy dresses and sheer camisoles seemed a little random, you have to commend Ferré for his tenacity. His finale of layered flamenco shawl gowns was an equally random addition — but worth an olé!

Blumarine: Anna Molinari is simply a cockeyed optimist. Every season’s Blumarine line indulges her nostalgia for pretty times gone by and her sweet tooth for majorly girly dresses. For spring, she rifled though the ages, showing ladylike retro ruffled lace shirts and box-pleated skirts, many paired with those decorated cardigans she loves, whether pearl-studded or covered in appliqué lilacs. Evening was just as romantic with a bouquet of chiffon gowns in rose, pink and lavender.

Dsquared: You can always count on Dean and Dan Caten to send out a Dsquared collection filled with smart prepster blazers and va-va-voom sex appeal. That’s not to say, however, that keeping to their M.O. for spring proved a disappointment. On the contrary, their decision to bring their girl home to la bella Italia proved a delightful one, full of saleable merch. Against a stage set re-creating Capri’s famous piazzetta, the jet-set hangout, the designers added a modern touch to “La Dolce Vita” fare — crisp button-downs, lace-trimmed frocks as well as sporty and nautical fare. Despite the vapid draped numbers and one too-mini suspender mini, the show made for a lively respite from the rest of the collections.

Philosophy by Alberta Ferretti: A Prairie Volume Companion could have been the name of Alberta Ferretti’s spring romp. Somewhere north of sexy and west of spirited, Ferretti found a pleasant middle ground in the unfettered plains with a barn full of sweet peasanty minidresses, often with lace insets. But even those prairie girls aren’t likely to cotton up to those shapeless layered chiffons.

Luisa Beccaria: Luisa Beccaria may not blaze new trails, but her swooshes of silks still make it down the red carpet. This season, she tinkered with her oh-so-pretty formula ever so slightly, by focusing on two hot trends — short and metallics. Frisky dresses and skirts with lace insets looked young and fresh, while gold patches splattered over white cotton peacoats and shifts were Beccaria’s take on bling. Maybe expected, but it was a moment of calm amidst the storm of aggressive trends.

Neil Barrett: Like the soft, clean light that follows a spring rain, Neil Barrett’s collection was fresh, focused and grounded in a reality that was often absent from the Milan runways this season. Belted double-breasted vests, tulip skirts with a pleated hem and skinny tux pants with pleated georgette panels at front, epitomized Barrett’s tailoring skills and newfound feminine touch.