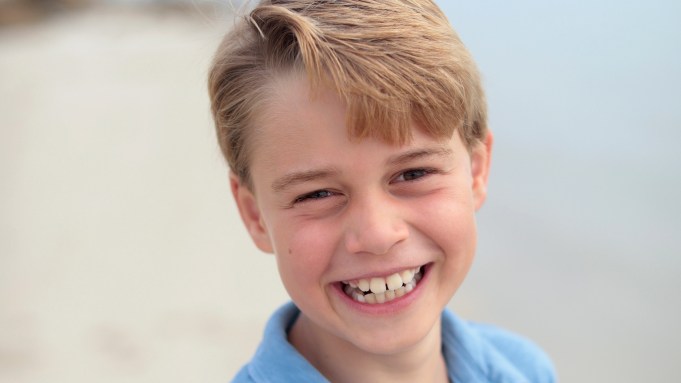 LONDON — Britain’s future king Prince George turned nine on Friday, and his mother, the Duchess of Cambridge, as usual, took a picture to mark the occasion.

The image was taken during a family holiday in the U.K. earlier this year. The eldest son of Prince William and Kate Middleton is wearing a blue polo top and a big smile.

The young prince has slowly been making his debut by joining his parents on public engagements. He appeared at Queen Elizabeth II’s Platinum Jubilee celebrations, and accompanied his parents to the Wimbledon men’s finals.

His outings, however, have been few and far between, an indicator that his father, Prince William, is aware of thrusting him into the limelight too early. Princes William and Harry have both spoken about the difficulties of growing up in the public eye.

Last year’s birthday portrait was an ode to George’s late great-grandfather, Prince Philip who died in April 2021. In that photograph, the young prince posed in a John Lewis striped polo top on top of a Land Rover Defender, Philip’s favorite car.

Previous photographs have included George in a camouflage T-shirt for his seventh birthday; an England football shirt for his sixth birthday, and a striped Pepa & Co jumper for his third birthday in Norfolk.

The debut birthday photograph was in 2014 at the Natural History Museum, where Middleton is a patron.

The duchess told “The Great British Bake Off” judge Mary Berry in 2019 that she loves making a birthday cake. “It’s become a bit of a tradition that I stay up ’til midnight with ridiculous amounts of cake mix and icing and I make far too much. But I love it,” she said.

George’s outfits bear a subtle resemblance to his father’s when he was a young boy. Diana, Princess of Wales, would often dress William in dungarees and checked shirts paired with shorts.

The off-duty images captured by the duchess hint at what kind of monarchy Prince William and the Duchess of Cambridge have in mind — one that’s out of the public eye, but adheres to the tradition of engaging with people around the country.