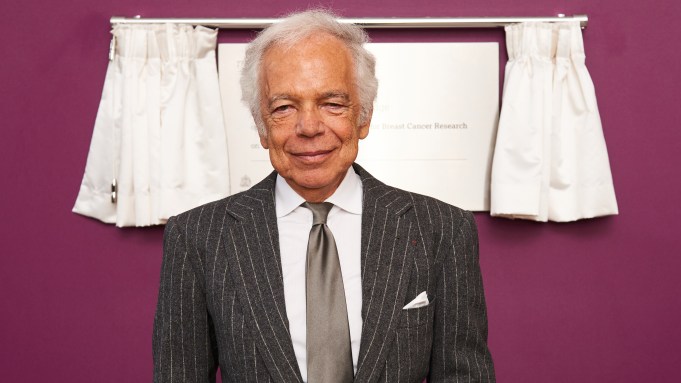 LONDON — “I’m not a philanthropist, it’s more about having a soul. I care about what I’m doing emotionally, but then when you see the results you think you’re not doing enough,” said Ralph Lauren on Tuesday after unveiling the breast cancer research center that bears his name at The Royal Marsden Hospital, side-by-side with wife Ricky and Prince William.

The designer gave new meaning to the term luxury goods with the opening of The Ralph Lauren Centre for Breast Cancer Research: His multimillion-pound donation, revealed two years ago, wasn’t about a plush shop fit, or pricey suede and satin separates, but a streamlined, sunlit hospital floor spanning 6,383 square feet where researchers and clinicians are focused on curing a variety of breast cancers using the latest equipment and resources.

“I started with breast cancer because of a personal reason, because of a friend, Nina Hyde, who was an editor. All of a sudden, a friend has it and it touches you, it touches your whole family, so you get involved and you think ‘I can do more,’” said the designer, who was dressed on a cold May day in a flannel chalk-stripe suit, gray tie and white shirt.

“It’s not about telling the world everything you’re doing, it’s about setting the tone for people to think, ‘Hey, I can do that, too,’” he added during an exclusive interview with WWD.

On Tuesday, Prince William, who has been president of The Royal Marsden since 2007 — a role once held by his late mother Princess Diana — officially opened the center. The prince and the Laurens toured the new floor’s labs, talked to doctors and researchers, and later spoke to patients who were receiving cancer therapy on the hospital’s ground floor. They wore white lab coats with the name Ralph Lauren Centre for Breast Cancer Research, The Royal Marsden embroidered in dark thread above the pocket.

Lauren, who first met Prince William two years ago when the project was first announced, said he was happy to spend time with the young royal. It certainly brought back memories: Twenty years ago, it was Princess Diana who handed Lauren the Nina Hyde Center for Breast Cancer Research’s first Humanitarian Award in the U.S.

“He’s a very charming young man and very caring and real. He certainly followed up from his mom and got involved with the charity, knowing that it was one of her favorite things and how much she cared about it,” he said.

In a speech on Tuesday after visiting the center, William said: “Seeing the courage and spirit of the patients I met today, it would be hard not to feel positive about the work being done here, and the real difference it makes. A difference which I know extends beyond the four walls of this hospital, to cancer patients across the U.K. and internationally.”

Lauren has a long history with the Royal Marsden, which in the past has been a beneficiary of his Pink Pony Cancer Fund. The Royal Marsden gift is the designer’s first single, substantial cancer-related donation to an institution outside the U.S.

Until now, researchers and doctors at The Royal Marsden, which forms part of the largest comprehensive cancer center in Europe, had been making do on a cramped floor at the Victorian hospital, which was founded in 1851 and was the first facility in the world dedicated exclusively to cancer treatment.

The old space was at least 20 years out of date and could not accommodate the new technology and trials taking place. The Marsden, which works closely with Britain’s Institute of Cancer Research, an academic facility, treats more than 50,000 cancer patients annually and the situation had become untenable. The new center, which cost 3.9 million pounds, or $5.60 million, was built with funds from Lauren and from the Royal Marsden Cancer Charity, which works exclusively with the hospital.

Today, fluorescent microscopy, liquid biopsy testing, tissue block storage and a host of medical trials are taking place in roomy laboratories located across from researchers’ offices and a conference room with new video facilities. The center’s overall aim is to identify molecular differences between tumors and tailor treatments to fit the DNA of the patient, eliminating the need for risky or toxic therapies.

As for Lauren, it’s already been a big British year for the designer — and there’s more to come.

Earlier this month Lauren unveiled updated uniforms for the Wimbledon Championship’s on-court officials. This will be the 11th year that Lauren will dress Wimbledon’s chair umpires, line umpires and ball boys and girls, and he said it was time for a refresh. “We’re always looking at what we can improve and what we can do to keep it contemporary, but at the same time keep the tradition of what Wimbledon stands for. You want to make sure that it looks new enough, special and not too special, a little bit understated.”

Later this summer, he’s set to open Europe’s largest Polo Ralph Lauren store on Regent Street. The store will stretch more than 17,550 square feet on three floors, and the designer said he’s eager to capture a younger audience. “London has been very good to me. I think people in London have worn my clothes for a long time, and with the new store you’re looking for a younger audience, a new audience. It’s nice to develop in areas that are getting the customers — and getting the audience.”

Retail — how it’s changing, the scope of his brand and the new audience he wants to speak to — is top of mind and Lauren is eager to talk about his plans.

As he gears up for his 50th anniversary next year, he said the biggest challenge is “understanding that the business has to change and redeveloping it as the world gets more modern. I’m always rethinking how to update, how to keep it pertinent and relevant. That’s the project that I have.”

He said business today is defined by a variety of new parameters: “The fashion business is more complicated today, and has a lot more people in it, and a lot of people who think they are designers and they’re not,” said Lauren, although he would not name names. “It’s also about quick delivery. Customers want the clothes today and they don’t want to wait. So I brought a ceo in to do a lot more thinking. We’re changing and we’re looking for new ways of working with the consumer.”

His original vision — the dream of offering customers a fantasy, an idealized look and lifestyle — is still firmly fixed, and he’s always thinking beyond the clothes.

“I never thought that fashion was only for clothes. It’s in food, in lifestyle, in home. If you know what you’re doing and understand what your voice is, there are new ways of expanding your business. You have to be able to feel the pulse of the world, to be able to design ahead. Technology has made a big difference, but taste and style are ever-changing and you have to have confidence in what you want to stand for,” he said.

“You notice people going to restaurants and the organic, healthy sensibility is very much heard. So many more people are concerned about their health. Girls are running around, pushing their [baby] carriages, but they’re wearing sweats, workout clothes and it’s stylish now, it’s cool. Products change and lifestyles change and that’s really part of what you pay attention to.” That said, ath-leisure will not take over the world, he said. “It’s just another dimension.”

Lauren is particularly proud of the success of his three restaurants — and there are plans to open a coffee shop, similar to the one that’s in the Polo store in New York, at the Regent Street unit. A hotel, which he mooted during an interview with WWD two years ago, is still very much a possibility, although there are no plans in the works.

He feels particularly strong about the importance of food and drink in a fast-changing, increasingly omnichannel world. “There are a lot of people who come into the Polo store in New York and want Ralph Lauren coffee. This is the [new] sensibility of bricks-and-mortar. If you’re going to build retail today, how do you handle bricks-and-mortar? Is everything on the Internet? Well, certain things are and certain things aren’t.

“On all levels the Internet is great, but the experience of going to the store is a different experience. How the sales people help, and the fact that you can sit down and have a cup of coffee or some wine. It’s a new way of exciting the customer, and it brings people into the store.”

It’s not for everyone, however. “Some people can think broader than clothes and some people can’t. It’s not an automatic success, you have to have a concept and know what your message is.”

His signature message — manufacturing a wearable, livable fantasy — remains the same. “People are much more imaginative today, and they want their own movie. And I’d like to make a movie for them.”