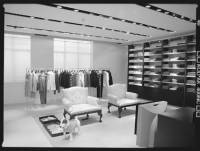 LONDON — Pringle has torn down the hoardings on its New Bond Street store, and inside there’s a mix of knights in shining armor, Fifties debutantes and 21st-century city slickers.

The store, designed by London-based architects Wells Mackereth, is Pringle’s second new-generation flagship to be unveiled this year. The first, in Tokyo, opened in August. Housed in the former Emporio Armani space, the store covers 5,200 square feet over two floors and stocks the Scottish knitwear company’s women’s, men’s and children’s clothing and accessories.

“This is a major step for us,” said an ebullient Kim Winser, Pringle’s chief executive officer, who is spearheading the relaunch of the 187-year-old company. “It’s a chance for us to showcase the fall collection in the full environment of Pringle.”

The London and Tokyo store openings are part of a three-year retail rollout in major cities around the world. The plan is to open 12 units outside the U.K. — including New York. As reported, the $43 million retail push over the next three years is part of an overall plan to rejuvenate the brand, which was purchased by the Fang Brothers of Hong Kong in February 2000.

Winser, who worked the cash registers of the new London store on the first day of trading last Wednesday, said there was no recessionary feel in the air. “There are plenty of people out there with disposable money to spend. We doubled our first-day projections by 4:30 in the afternoon. It’s been a good first start,” said Winser, although she declined to reveal any figures.

Sources here say that Pringle invested approximately $3.4 million in the shop, although Winser declined to confirm the figure.

The store’s architects took elements from Pringle’s heritage, tweaked them and showcased them in a bright, polished, minimal environment. There are antlers — reminiscent of Scottish castles — cast in clear resin or carved from black granite, a jumble of knight’s armor in one window and shelves made from laser-cut fossilized stone that recall old castle walls.

But Pringle’s glamorous side is on display, too. The cushions stacked in front of the fireplace are covered in pink satin while thick bunches of pink roses sit in vases throughout the store. A rich blue-gray damask is stretched across the back wall of the ground floor.

“We could have gone mad with the Scottishness, and done a Disney-esque baronial castle, but we wanted something a lot more playful. What we tried to do was bring in some of the wilds of Scotland and use the elements of a great baronial house subliminally,” said Sally Mackereth.

To wit, there is a knitwear “library” where sweaters are grouped by color and stacked on shelves, a fireplace at the entrance filled with brightly painted logs, and balustrade details that recall the swords old Scottish families once displayed on their castle walls.

The first floor is dedicated to women’s fashion — including handknit sweaters and scarves — while the second floor showcases men’s and children’s wear and accessories like argyle sweaters for dogs. Display tables on the men’s floor are inspired by old billiard tables, while chairs are wide and imposing with claw-shaped feet.

Bill Christie, Pringle’s head of retail, said the choice to put women’s on the ground floor was a strategic one, as it still only accounts for 35 percent of the business. “The women’s collection is key to the brand positioning,” he said. Prices at the new store range from about $75 for bags and scarves to $975 for the handknitted Scottish sweaters.

Next up for Pringle is a second London unit on Sloane Street which is due to open in the spring. That store covers about 12,000 square feet, 5,500 of which will be used for trading — with the potential to expand. Mackereth said the mood at that store will be a little more playful and relaxed and have more of a “country house” feel.