Nicole Miller works her love of ancient symbols and cultures into her designs. 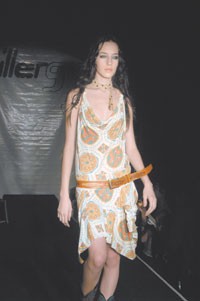 What started with Nicole Miller’s interest in Celtic symbols has turned into an odyssey of sorts through civilizations.

Having always been “obsessed” with Celtic knots and symbols, the designer interpreted them in her own way for a variety of prints a few years ago. She was quickly hooked on ancient cultures and has been researching them and reworking their symbols into her designs ever since. So much so that colors are often named as they would have been for the various cultures.

The designer’s travels spark ideas from time to time, as was the case after a jaunt to Tulum, Mexico, triggered Mayan-inspired prints. But more often than not, the learning curve is what gets Miller and her team energized.

“What’s happened is that the research has gotten so interesting,” said Miller, explaining why she is so jazzed by ancient cultures. “There are always nice historical tidbits. Everybody gets so excited when we uncover something.”

Prints that will be shown Friday night on the runway wink at an as-yet-unnamed South American culture. Her enthusiasm is high even though she hasn’t visited the continent, never mind the country of focus. “I don’t do anything with any set plan,” she said, preferring to gravitate toward what interests her at any particular time. “Lots of times I feel that I am not a super commercial person. I always try to experiment and do new things.”

Understandably, rehashing the Sixties, Seventies and Eighties is not something she is interested in. “I always feel that I try to carve out a path that is different — and so far I’m still here,” she said. “It helps me stand apart. Nobody else today is really doing this — not that anyone hasn’t done this in the past.”