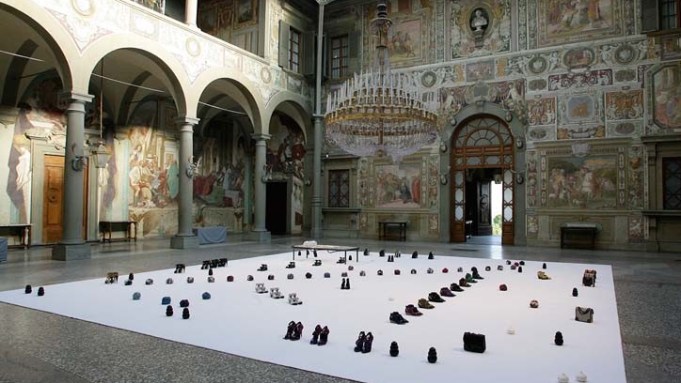 FLORENCE — For their first show outside the U.S., Proenza Schouler’s Jack McCollough and Lazaro Hernandez said “basta” to runways and traditional formats. Instead, the duo asked three contemporary artists to interpret their pre-spring collection in each one’s medium, and presented the work in a raucous, avant-garde bash.

“Now that pre-collections are becoming so important, it’s nice to be able to explore other avenues by which to show it,” said Hernandez. “Especially since it’s inherently a more commercial collection, there’s room to balance that with something more showy.”

The designers faced the press the morning of the exhibition, held Thursday night at the Medician enclave Villa La Petraia, on the hills over Florence. Following the likes of Diane von Furstenberg and Giambattista Valli as featured guests of the Pitti W fair, Hernandez and McCollough flew in from New York on the heels of winning the Council of Fashion Designers of America Accessory Designer of the Year Award, their third CFDA award in seven years.

“It’s all a blur,” said McCollough, recalling their whirlwind celebrations into the night on Monday and flight to Europe the following day.

In the formal Italian garden, a bare-bottomed Pfahler, performing as The Voluptuous Horror of Karen Black, sang discordantly in a Proenza Schouler bustier and laced-up thigh-high boots while Hernandez, watching from the sidelines, laughed uproariously. Pfahler was backed up by a chorus line of retro go-go dancers — wearing the designers’ bodysuits, giant teased wigs, and covered in black body paint — and accompanied by theremin player Armen Ra and DJ Spencer Sweeney. Pfahler had also set up cryptically labeled lemonade stands, which complemented the all-American fare of burgers, popcorn and the like.

One can only guess what the Medicis would have made of it.

Yvonne Force Villareal, co-founder of the nonprofit Art Production Fund, viewed working with Pitti Immagine, which organizes Pitti W, as befitting her goal to spread contemporary art. “This helps us broaden the audience for contemporary art, and the tradition of Pitti’s collaboration with artists is profound,” she said. “To partner with other organizations is essential to make things happen in a bigger way and enable artists to create a vision without compromise. And art and fashion cross over.”

“Art is a constant reference point in our collection. We’re always looking to art for ideas, whether colors or shapes or just a feeling,” said McCollough. In fact, if he hadn’t been a designer, McCollough likes to think he would have been an artist. “I fantasize about not having deadlines, putting a show together whenever I’m ready. But I sometimes think the art world can be more ruthless than the fashion world. I’d want to be a nonworking artist. An outsider artist, I suppose.”

“I just want to be a farmer. That’s all I want to do,” he said. The designers recently bought a 10-acre farm in the Berkshires in western Massachusetts.

“It’s where we truly get inspired for our collections,” said McCollough. “We have a full vegetable garden, and we get all our meat and chicken from the farm. Especially right now, when everything is sort of thriving, we literally live off the land. It’s become such a great escape. That kind of seclusion is a necessity.”

The farm appears throughout the latest issue of A Magazine, the semiannual art and fashion tome, which was guest-curated by the designers and launched this week. Even a back-page ad for Proenza Schouler features neither a woman nor a stitch of fashion, but a close-up of a local coyote. (Sevigny graces the cover. “You probably didn’t recognize me,” she said at the villa. “I’m a shape-shifter.”) The issue follows the same vein as the Florence project: young artists reinterpreting and restyling the work of Proenza Schouler and feeding inspiration back to the designers. The event was “a major version of that,” said Hernandez, adding that he was mulling the idea of replicating it in July in New York.

“Of course, it won’t be in a Medician villa, but perhaps in a garage,” he quipped.

That said, McCollough dismissed the notion of nixing runway shows altogether. “Shows are a necessary vehicle twice a year,” he said. As for showing elsewhere, he said, “Fashion has become much more global, and it’s not necessarily American fashion versus Parisian versus Italian. In America, it runs the gamut. So I don’t think we need to pigeonhole ourselves, ever. We’d definitely be open to showing one day in Paris. There’s a different exposure you get over here. At the same time we identify strongly with America; it’s our home. So for now we’re going to be staying there.”