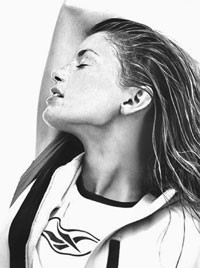 “We are concerned about the conditions that currently exist in the U.S. marker for traditional branded apparel,” Ken Watchmaker, chief financial officer and executive vice president, said on a conference call. “The market is promotional, challenging and not currently fashionable. As a result, we will be focusing our efforts for U.S. branded apparel during 2004 on the quality rather than the quantity of this business both in terms of products and in terms of the channels in which the products are sold.”

Sales are planned to be down in the double digits for U.S. Reebok branded apparel this year, but the company said it plans to grow its performance and licensed apparel, both of which have been selling well. On a positive note, sales of U.S. branded apparel are expected to have an improvement in the operating margins, both on the gross and the net level. Licensed goods drove apparel sales in the quarter, Watchmaker said. The company outfits the National Football League and some teams in the National Basketball Association, and starting with the 2004 basketball season, Reebok will have the exclusive rights for all NBA on-court apparel.

The results this quarter were driven by its U.S. footwear and licensed apparel, as well as improved gross margin and strong sales on a weak dollar. Despite a poor showing from its branded apparel, U.S. apparel sales grew 7 percent to $155.1 million in the quarter, while U.S. footwear sales jumped 17 percent to $228 million.

Watchmaker said the company has benefited from its increased advertising and marketing, as well as its focus on the Rbk label, which was launched two years ago and is designed to appeal to a younger consumer. Reebok also saw strength in its performance products, including its running shoes, another area targeted for growth.

“During 2004, we are planning to extend the reach of our Rbk products geographically as we continue to invest in this marketing and product platform throughout the world,” said Paul Fireman, Reebok’s chairman and chief executive officer.

Rbk will be rolled out to the U.K., France and Japan, Watchmaker noted.

“Our expectations are that conditions in the major markets will improve during 2004, and our marketing and advertising is targeted at increasing the frequency of communication with our core consumers,” Watchmaker said.

Worldwide sales for the Reebok brand were $2.94 billion, up 13 percent over last year.

On the call, Watchmaker said Reebok expects earnings to rise 15 percent in 2004, in line with analysts’ expectations, and sales are expected to grow in the mid-single-digit range. Analysts are expecting earnings of $2.76 a share.