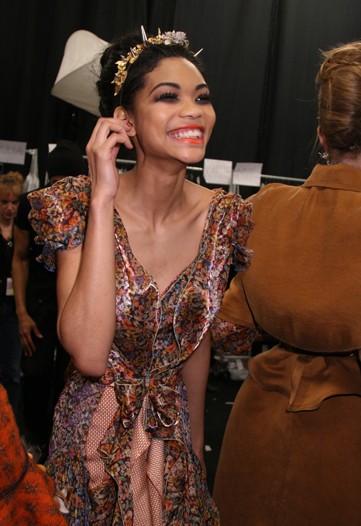 For a few years now, the lack of ethnic diversity on the runways has been widely discussed, but this season brought a noticeable change. Call it the Obama effect, or just the right look at the right time, but many shows seemed to feature more black, Asian and Latina models.

Almost half the looks in Oscar de la Renta’s show were worn by minority women, and black British model Jourdan Dunn walked off with the coveted opening and closing spots. Dunn, in fact, walked in 57 shows during the four main fashion weeks, opening three shows, closing two and taking both the opening and closing exits for two designers besides de la Renta. And for the first time, Calvin Klein Collection held an exclusive on a black model, Lyndsey Scott.

“On one hand, this is fantastic,” says designer Phillip Lim. “But on the other hand, I feel that we shouldn’t have to notice something like this because it shouldn’t be an anomaly.”

According to the U.S. Census Bureau, blacks, Asians and Latinos make up about 25 percent of the U.S. population.

Some attribute the increased diversity on the runways to the national political and cultural shift since President Obama’s election, while others point to the all-black issue of Italian Vogue last July. Jason Wu says he was influenced by that issue. “We looked at the stunning editorial and asked ourselves, ‘Why aren’t we using more black models?’”

Sessilee Lopez, who was one of the four black models featured on the Italian Vogue cover, walked in 25 shows in New York and Paris. “To have an issue that’s showing the whole industry and the world that these are great models, too, has helped out a lot — not just my career, but everyone else’s,” she says.

Yet, some don’t see it as such a sweeping change, saying that it’s simply the right look at the right time. Mark Badgley of Badgley Mischka agrees. “We really look at the beauty of the girl, not the color of her skin,” he says, while Oscar de la Renta asks, “Are we still in the 17th century when we are talking about color? In my mind, it is a nonexistent issue.”

Still, the cultural movement in the U.S. over the past few months was reflected on the New York runways. “I just can’t help but think that it is related,” says Tim Gunn, chief creative officer of Liz Claiborne Inc. “The model casting happens so close to the shows — I’m confident it all happened after January 20.”

The same cannot necessarily be said across the Atlantic. In Milan, Andrea Losavia, an agent for Major Model Management, reports, “Our culture still isn’t multiethnic. It is still strongly linked to the Caucasian form.” In fact, some major shows that normally have more diversity, like Emporio Armani and Prada, chose an all-white cast of models.

There wasn’t much change in Paris, either. Casting director Jennifer Starr thinks Europe is tough for ethnic models. “I feel like they use the token black girl in their lineup. I would feel terrible if I were a black girl going to the shows in Milan or Paris. I would feel like, why am I here?”

Rose Cordero, a 15-year-old black model who hails from the Dominican Republic, proved to be one of Paris Fashion Week’s hot new faces, though she was able to only walk in the Louis Vuitton show there because of labor laws concerning young models. “It was very frustrating,” says a spokeswoman from the Paris agency Angels, which looked after her during the week. “Givenchy wanted an exclusive and Alexander McQueen and Hussein Chalayan wanted her for their shows, but we have very tight laws here about the hours they can work.” Cordero also walked in three shows in Milan.

Minority models had reason to feel more at home in London, where demand was higher. Storm Models spokeswoman Paula Karaiskos says it’s more the right girl at the right time. “I wouldn’t really call it an Obama effect over here,” she says. “I’d maybe call it the Jourdan and Italian Vogue effect.”

For some designers, models like Dunn and Lopez just had the right look.

“I can never sacrifice the look I’m after,” says Vera Wang. “It’s not a type in terms of racial profile. It’s a type of girl with a very modern attitude.”

Vivienne Westwood concurs, adding, “Sometimes we don’t choose a girl — even though she is amazing — just because she doesn’t quite fit our theme. Next season she might be perfect again.”

Lopez adds, “If your look fits the season, then it’s pretty much guaranteed that you’ll do well, everywhere.”

Meanwhile, Starr sees the opening of the runways this season as one step down a long road. “I think it’s better,” she says. “I still think we have a long way to go.”