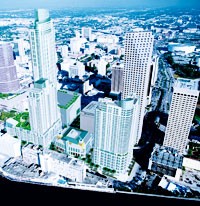 Though the nation is overstored and major mall development has slowed to a trickle, there’s still plenty of construction activity to generate retail growth. Developers are getting creative, finding opportunities to build in neglected downtown pockets and investing in reenergizing older properties through renovations and expansions. Here’s a sampling of some projects on the rise or near groundbreaking.

LONGING FOR LONG ISLAND: Taubman Centers plans to expand its portfolio of high-end malls with The Mall at Oyster Bay on Long Island. It’s where Neiman Marcus hopes to open its first store on Long Island, which hasn’t seen a major shopping center go up in 30 years. Lord & Taylor is also committed to the project.

The undertaking has been stalled by local opposition for traffic and environmental reasons. Years ago, Taubman filed a lawsuit against the Town of Oyster Bay for denying an application for a special-use permit, but according to Mark Bulmash, Taubman’s group vice president of development, Taubman has won six decisions at different levels of the court system and is moving closer to a groundbreaking on the site, a former industrial complex. He also said Taubman has figured out how to mitigate the proposed mall’s impact and would consider scaling down the mall from the intended 860,000 square feet. The site is off Exit 43 of the Long Island Expressway and about 45 minutes from Manhattan. “We expect to prevail here,” Bulmash said. “We have a good feeling based on all previous litigation results.” Major competition would be from the Roosevelt Field and Walt Whitman malls and the Americana Manhasset shopping center.

DESIGNS FOR DALLAS: Downtown Dallas has long been bereft of exciting retail, save for the legendary Neiman Marcus. That’s about to change with two ambitious projects: Victory, a $100 million venture at the northwest end of downtown, and City Lights, a 350,000-square-foot shopping center located on Live Oak and Bryan Streets.

The 72-acre Victory will include 250,000 square feet of retail space along with office space, a 251-room W Hotel and 94 luxury town houses. Developers Gatehouse Capital Corp., Hillwood Development Co. and Southwest Sports Realty began construction in March, according to a spokesman for Hillwood, which is led by Ross Perot Jr. The first phase of Victory was the American Airlines Center that opened in 2001.

City Lights will span more than 11 acres and two city blocks, according to Donald Silverman, managing partner of Margaux Development, who said the center would be anchored by a 72,000-square-foot supermarket but contain stores typically found in a suburban center, including a drugstore and perhaps an off-price fashion retailer.

HAIL CAESARS: The Simon Property Group is expanding the highly productive The Forum Shops at Caesars, in Las Vegas, with a 175,000-square-foot, three-level addition in the works, scheduled for an October 2004 completion. The addition will extend the existing retail, dining and entertainment complex to the Las Vegas Strip for greater visibility, easier access and more shops, with about 60 upscale specialty retail tenants committed to coming in.

Another major Simon redevelopment is at the 1.5 million-square-foot SouthPark Mall in Charlotte, N.C., which last month added a 153,000-square-foot Nordstrom, a 60,000-square-foot Hecht’s expansion and 50,000 additional square feet of small shops. Later this year, Galyan’s will open at the mall.

MIXED-USE AND MASSIVE: Atlantic Station, an urban mixed-use development, is planned for midtown Atlanta, a few miles north of the downtown business district. More like a miniature city than a mall, the massive $2 billion, 138-acre project, on the former site of the 100-year-old Atlantic Steel Mill, was conceived in 1997, with construction commencing in January 2002. The complex includes 12 million square feet of retail, office, residential and hotel space, with 11 acres of parks. The first phase will open in spring 2005. For easy access, a bridge spanning the interstate highway was constructed last summer, and plans include transit shuttle systems and bike, pedestrian and auto lanes.

For the 1.5 million square feet of retail-entertainment, Dillard’s will be an anchor, becoming the only department store in the midtown or downtown markets, after Rich’s closed in 1991, and Macy’s closed last year. Atlantic Station is over 50 percent leased, with nine sit-down restaurants and movie theaters. Other retailers committed include Ikea, Victoria’s Secret, Express Bath & Body Works and Pier 1.

IOWA ALLURE: Fifty retailers are moving into the Des Moines area for the first time via the opening of Jordan Creek Town Center, in West Des Moines, Iowa, scheduled for Aug. 4. The General Growth Properties development is a 200-acre, $200 million shopping-entertainment venue, anchored by Dillard’s, Younker’s and Scheels All Sports. Among the newcomers are Coach, Coldwater Creek, J. Jill and White House/Black Market. The project includes a two-level enclosed mall featuring a streetscape design, a three-acre lake surrounded by restaurants, a hotel and amphitheater, and an open-air “village” collection of large and small retailers.

ON THE WATERFRONT: An $800 million project in Miami stands to provide a core of activity for residents and tourists that’s been lacking in this sprawling, fragmented city. Being developed by MDM Group USA based in Miami, the project links the Metropolitan Miami residences, including luxury condominiums, lofts and rental apartments, and Met Square, a lifestyle center for restaurants, shops, an art house cinema complex and a gourmet grocery store. The entire complex is located on 6.2 acres of waterfront property along Biscayne Bay.

“Lifestyle centers are unique, because they’re spurring the rebirth of urban areas and financial districts,” said Tim Weller, vice president of development. “What makes our project even more unique is that we were given such a large area, on the waterfront no less, to work with.

ELEVATING THE LIFESTYLE: Waterside Shops at Pelican Bay, an outdoor lifestyle center in Naples, Fla., has begun a remerchandising and redevelopment, involving a conversion of a former 62,000-square-foot Jacobson’s into a new wing for designer and luxury brands. There’s already a Saks Fifth Avenue in the 270,000-square-foot center. “We are focusing on updating the shopping center in terms of design and scale, and adding many more tenants,” said Nathan Forbes, managing partner of the Forbes Co., which along with the Taubman Centers last December purchased a 50 percent stake in the center.