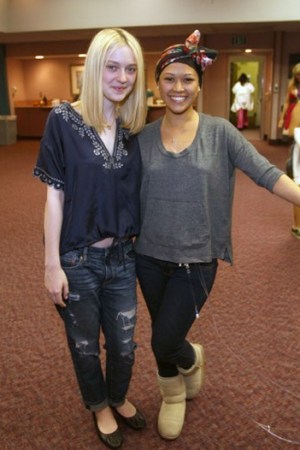 A prom isn’t the same without the perfect prom dress, as anyone knows who’s ever been horrified at past prom Polaroids or watched “Pretty in Pink.” Dakota Fanning wore a blush Hervé Léger mini to her prom at Los Angeles area private school Campbell Hall. And she sifted through four racks stuffed with 100 BCBG Max Azria dresses at Children’s Hospital of Orange County to help 35 teenage cancer patients and survivors pick their favorites for the hospital’s annual prom.

“I got to meet Dakota Fanning, and she is so cool,” beamed Justiniano, while getting makeup tips on eyeliner application from a Stila makeup artist. “She is so much like a regular person.”

Up next on the regular person agenda for Fanning is graduating high school and heading to college in the fall with plans to study psychology. Less regular is Fanning’s summer job working in London on the upcoming movie “Now is Good” in which she plays a leukemia sufferer. After “Now is Good,” Fanning, who won’t take a hiatus from acting for college, starts shooting another movie in New York in September. “The school is allowing me to be flexible. I don’t want to stop working for four years,” said Fanning, who also will be seen in “The Twilight Saga: Breaking Dawn Part 2” next year.