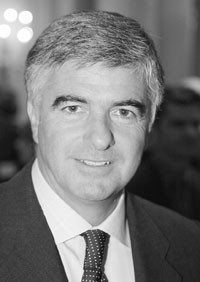 NEW YORK — Although a shock to the fashion world, Pinault-Printemps-Redoute’s decision to tap an industry outsider — Unilever’s Robert Polet — is seen as a wise move that could pay off in big ways for Gucci.

Fashion observers, scholars and consultants as well as “crossover executives,” many who honed their skills at Unilever, see Polet’s odds of success as chief executive officer (read: improved sales) as good.

Polet faces hurdles, of course, but there are management skills that transcend industries, observers said. Moreover, Polet joins a growing cadre of crossover executives who have made successful migrations.

Leslie Gaines-Ross, chief knowledge and research officer at consultant Burson-Marsteller and author of “Ceo Capital” said about a third of all companies hire outsiders to fill their top posts.

“There’s always that ‘You picked who?’” reaction, she said. “The fear is that this person is picked just to raise the stock price. But remember, Polet’s reputation is on the line, so is [PPR chief executive Serge] Weinberg’s and PPR’s board. There’s a lot at stake, so I’m sure [Polet] has been thoroughly vetted.”

Harvard Business School professor of business administration Joseph Bower said hiring an outsider is “not an easy thing to do and the track record isn’t brilliant, but there are certainly examples of [success].” Bower cited Robert Nardelli, a former GE executive who joined Home Depot and then, after a bumpy learning curve, transformed it into a lean, mean retailer.

Still, there are concerns about Polet —an executive stepping from the frozen food aisle onto the runway. “It will certainly be an issue as to whether someone from mass consumer goods can transition to luxury goods and manage the kind of talent you find in those organizations,” Bower said.

Wharton professor Michael Useem noted that because “many leadership skills are portable” the difference between success and failure boils down to “the extent to which the ceo is a fast study, adapts quickly and can appreciate what really drives value at the new firm.”

A success story of an industry outsider doing fashion good is Antonio Belloni, group managing director at LVMH, who came to the French luxury giant after a 22-year career at Procter & Gamble. He is widely credited with restructuring and quickly getting DFS and Sephora back on track and for engineering the strategy that has seen LVMH focus resources on star brands, while tailoring new strategies for each individual business.

In an interview Friday, Belloni credited the support and guidance of LVMH chairman Bernard Arnault, and other top executives, for helping him adjust and thrive in a new sector.

Belloni confessed that he grasped the selective distribution and perfumes and cosmetics business more quickly than fashion. “You still have to make the customer happy. You deal with a product that differentiates itself based on creativity and craft values,” he said. “But the ways of expressing the brand is very different.”

Floriane de Saint Pierre, who owns an executive search and consulting firm in Paris, said many crossover executives to luxury have proven to be adept. De Saint Pierre mentioned the late Henry Racamier, a steel magnate who became the principal architect of Louis Vuitton’s early expansion, as a preeminent example.

Others include Nina Ricci president Paul Deneve, who came to fashion from Apple computers and Exxon; Michele Scannavini, president of Lancaster, who came from Ferrari and Maserati; Valentino’s Michele Norsa, who came from publishing, and even current Louis Vuitton chief Yves Carcelle, who had previously worked at French bedding maker Descamps.

Stuart Rose, a U.K. fashion industry veteran who serves as chairman of the British Fashion Council, knows this, too. Rose began his career in the Seventies at Marks & Spencer, working 10 years in its food division, after which he held senior posts at fashion and retail groups including Arcadia and Argos.

Rose is widely credited with turning around the Arcadia Group, which was sold to entrepreneur Philip Green for $1.2 billion in 2002. Rose said he thinks “Polet was quite an inspired choice on the part of PPR, and I think we’re going to see a lot of these sorts of crossovers in the future.”

Rose said Polet does not have to reinvent Gucci. “He won’t be the guy choosing the colors and the styles for next season. His job is to deal with strategic issues and make the company grow fast, sleek and big. Forget about frozen foods for a minute. Unilever turns out some of the most highly trained, professional managers in the world. They have top communication, analytical and management skills — it doesn’t matter whether they’re selling ice cream or peanuts. And they think globally, which is what Gucci needs.”

Charlotte Semler, founder and director of the high-end London-based lingerie brand Myla, said she thinks that “understanding your customer is the key in any business, and Unilever is phenomenal at understanding the customer.”

Before founding Myla, Semler worked in advertising for Saatchi & Saatchi on Visa and P&G. “Both Unilever and P&G spend more time and money than any other companies I know trying to understand the customer, which means that a well-trained manager coming out of these companies has had that culture drilled into him,” she said.

Other notable crossovers include Bulgari’s Francesco Trapani, said Paola Leoni, a consultant at ASI Consulting, which has offices across Europe. The Milan-based Leoni specializes in studying and recruiting managers from outside the fashion and luxury business. “I think some skills, such as brand management and retailing, can be transferred from one industry to another. But things like product development and product life cycle are not transferable. In fashion, you have to be very sensitive to the product and, of course, to the customer. The luxury customer is very, very different from a consumer goods customer. Luxury customers are tribal, they’re tied to the identity of certain products.”

Leoni added that Trapani “may have been born into the jewelry family, but his first job was at P&G.” Leoni said Paolo Alberti, the managing director of Bulgari Parfums, is also a P&G man. “I think a consumer goods background helps managers because it gives them discipline.”

Marvin Traub, partner in Financo Inc. and the former chairman and ceo of Bloomingdale’s, cited Paul Pressler, who went from Disney to Gap, as another good example of a successful crossover.

Gap is very much about “broad popular appeal” as is Disney, and the principles that make Disney successful are easily applied to Gap, Traub said.

On the other hand, “When you have a company in the designer apparel field undergoing enormous transition losing two very powerful leaders, the young and talented people remaining at the divisions need a partner and a sounding board,” Traub said. “They need help. They have lots of things to rebuild. I’m sure Tom Ford and Domenico De Sole were helpful to Mark Lee at Yves Saint Laurent. For someone who doesn’t have a background in luxury, it will be tough for him to be helpful in building the brands.”

Kirk Palmer, of the search firm bearing his name, noted that when De Sole joined Gucci, “his background was all law. I’m not sure this guy was steeped in the world of luxury, but he evolved into a great leader for positioning a brand and for working in concert with a brilliant design talent. It’s about broader leadership skills.”

Benetton has made a practice of hiring executives from outside the fashion world. In March of last year, Benetton named Silvano Cassano as the group’s ceo. He had no previous experience in fashion, having worked at places like American Express in Rome, automobile rental company Hertz and most recently as the head of Fiat’s leasing and financial services units.

“People who have experience in only one industry are often set in their ways about doing things a certain way. They don’t bring innovation to the table. There’s no cross-fertilization,” said a Benetton spokesman.

De Saint Pierre said successful crossovers depend not only on education, business smarts and an international scope, but also on “soft criteria” such as vision, taste, and deep culture as well as top-notch people skills.

Tim Ambler, senior fellow at the London School of Business, said it was important to remember that Unilever has a reputation for turning out strong marketing minds. Patience is critical.

“If the shareholders of Gucci are looking for rapid change, they are very ill-advised for bringing someone outside the industry,” Ambler said. “I hope that the shareholders are prepared to give him time to expect marketing results.”

Pierre Berge, the former couture boss at Yves Saint Laurent, gave his blessing to the hiring of an outsider at Gucci Group.

“I think it’s a very good decision. I don’t think De Sole had any particular competencies — he wasn’t a businessman, he was a lawyer — that Polet doesn’t,” he said. “Polet was a very strong and proven manager in a very big group. I think he’ll be up to the task. After all, the man who manages Gucci isn’t there to offer his creative ideas. De Sole didn’t do that.”

However, Berge provided a word of advice to the luxury neophyte. “It’s a very difficult business and a good manager needs to learn how to maintain the delicate balance between management and creation,” he said.