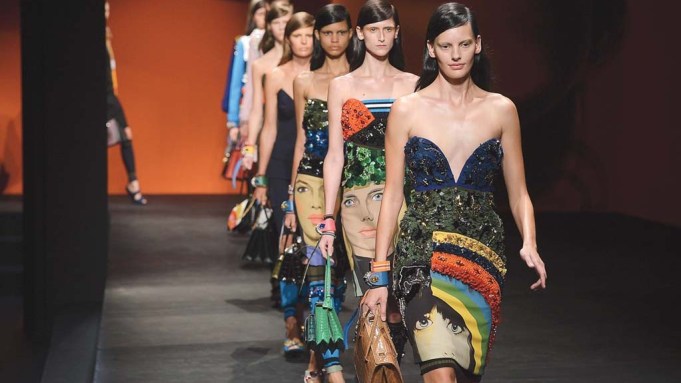 Last week, in the midst of pre-fall being shown in all of its commercially savvy glory, Karl Lagerfeld staged a gleefully splashy extravaganza in Dallas centered around Chanel’s ultraluxe Métiers d’Art collection. The juxtaposition — couture craftsmanship reinterpreted for ready-to-wear and dropped into the middle of “pre-” — made unintended sense. The ongoing attention to and importance of pre-collections has emboldened many designers to flex their design muscles more demonstratively than ever for their major runway collections.

The result is the emergence of a subcategory of runway collections that are increasingly labor-intensive, experimental, expensive and often, destined for limited distribution. Call it prêt-à-couture.

That’s not to say this intensely wrought prêt-à-couture homes in on real haute, nor that the pre-seasons are creatively bereft; many are very well and interestingly designed. But there’s no question that as the “pre’s” have flourished, the runway has become increasingly ornamental and often, more luxurious — to the point that by comparison, more straightforward runway collections can look, well, blah.

Much of the focus is on fabric development. Lagerfeld noted that Chanel’s paint-swatch print would have been impossible to make only a few years ago because the technology wasn’t up to it. “Now, the prints have 150 colors. Before, it was difficult to make more than 12,” he said.

Conversely, in advance of his show at the Musée des Beaux Arts, Dries Van Noten reproduced some of the museum’s 19th-century jacquards. “We went really far, to push manufacturers to make the textiles as close to the original stuff as possible,” he explained. “Which is not so easy because modern machines cannot always do what machines of that time could do.”

Fabric work aside, many designers strive to innovate with silhouette, cut and details, while still making the clothes viable in an increasingly casual world. At Calvin Klein, Francisco Costa turned multiple vintage movie posters into prints and crafted them into coats with a distinctly artisanal hand.

Costa said trying to replicate the genuine minimalism on which Calvin Klein cemented his place in fashion wouldn’t work today. “You look at Calvin and his message, which is so perfectly strong, but how can I bring that to today?…It’s a little more challenging to be competitive in this marketplace, because there is so much product.”

Costa added that his spring collection “was not the most easy clothes. But the intent was to create the excitement and show what the house stands for, and that it’s open for ideas.”

Proenza’s designing duo welcomes the chance to push creatively; their shows have become a highlight of every New York season. “We don’t like to buy fabrics right off the header,” said Jack McCollough. “We like to create things that have never existed before. The runway shows seem like a platform for us to do that, whereas the pre-fall collections are delivered earlier, so it makes more sense for them to be more commercial, better priced.”

They see a major downside to that divide, and suggest that with the benefit of a similarly long selling season, the more creative runway clothes would have stronger sell-throughs.

“The runway clothes are delivered late and the sell points are kind of crappy because they’re delivered late and because retailers spend most of their dollars on [the pre-seasons],” Lazaro Hernandez said. “So, OK, this means nothing? Great! We can really experiment. And it can be our couture, because a commercial weight isn’t on our shoulders. But…”

“We don’t want them to just be show clothes,” McCollough said. “We want them to be special pieces but things you can incorporate into your life. We don’t see it as so black and white. It would be nice if they had more of a longer life [at retail].”

To that end, the designers are thinking seriously about alternatives to the current seasonal calendar. Might there be a 2014 top story in the making?