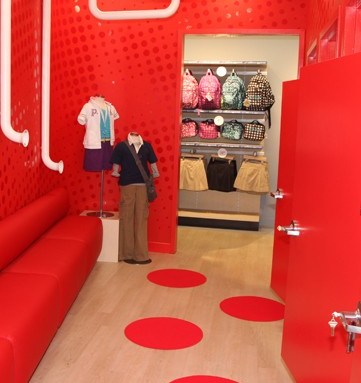 NEW YORK — P.S. may stand for postscript in literary terms, but the new retail concept from Aéropostale Inc., aimed at seven- to 12-year-olds, is no afterthought.

“We have the opportunity for at least 500 P.S. From Aéropostale stores,” said Julian Geiger, company chairman and chief executive officer. “Nobody is looking at this as a test. We have every reason to believe that this is going to be successful. We will be aggressive in order to grow this brand quickly. We’re leveraging systems, processes, sourcing and fabric from Aéropostale. [That will] allow us to grow quickly.”

While P.S. embodies the spirit of its older sibling, the format is no shrunken-down Aéropostale. “It doesn’t mindlessly copy Aero for a younger age,” Geiger said, adding a dedicated team has been working on P.S. for a little more than a year.

Not all of Aéropostale’s ideas have been home runs. Jimmy’Z, a chain introduced by the retailer, targeted young adults who wanted to dress like their favorite TV and film stars, but lacked the budget. The concept was tested in 2005, but Aéropostale in February closed all 11 Jimmy’Z stores. “Jimmy’Z was a different customer,” said Geiger. “It was a higher-fashion model. We tried to apply our core competencies to a customer who was not our customer.”

P.S. From Aéropostale seems more closely aligned with the company’s primary business. Besides, said Geiger, the kids’ demographic “is an underserved market. It’s a $14 billion market that’s projected to grow faster than the total market.”

Aéropostale, which did $1.9 billion in sales in 2008, is in a good position to introduce a second chain. It’s had 11 consecutive years of positive comparable-store sales, an anomaly, especially during this depressed economy.

Geiger sees potential for 1,100 units in the U.S. for the original Aéropostale brand, which now has about 900 stores. In March, Aéropostale ventured overseas with a store in Dubai and further Middle East expansion is expected. Geiger said that foothold will lay the groundwork for a greater expansion of the brand globally.

Since its beginnings as a Macy’s private label men’s brand, Aéropostale, which opened its first mall-based store in 1987 and went public in 2002, has found success with its promotional model. “Nobody wants a product that’s cheap,” Geiger said. “Over the years, our merchandise has just gotten better. We offer real clothes for real kids at a great price.”

That same strategy will be utilized at P.S. The initial plan calls for the opening of five P.S. units: one at the Palisades Center in West Nyack, N.Y., will bow Thursday, followed by Danbury Fair Mall in Danbury, Conn; Willowbrook Mall in Wayne, N.J.; Queens Center Mall in Elmhurst, N.Y.; Woodbridge Center in Woodbridge, N.J., and Bridgewater Commons in Bridgewater, N.J. Scott Birnbaum, senior vice president of marketing, said a store in Manhattan is a given, but no leases have been signed yet. The company is also looking for space at the Mall of America in Bloomington, Minn.

P.S. units, which average 3,500 square feet, are expected to achieve sales on par with Aéropostale stores that make about $572 a square foot.

The idea for P.S. came from years of watching mothers bring their teens to Aéropostale stores with younger siblings in tow. The little brothers and sisters would try to convince mom that the clothes fit them. “Aéropostale [aimed at 14- to 17-year-olds] lives at the intersection of fashion and value,” Geiger said. “It’s loved by kids, endorsed by moms with trend-right product and compelling values.”

At P.S., apparel will also be trend-right, but “we’re trying to keep it very young and innocent,” Birnbaum said. “Everything is age appropriate.”

P.S. From Aéropostale’s theme is communication, beginning with the store walls covered in kid speak with acronyms like BFF (best friends forever), OMG (oh my god), LOL (laugh out loud) and words such as “awesome.” Thought bubbles with similar messages make up the signature print for apparel. There’s even a giant cell phone on the wall with word tiles, which can be moved around; it’s one of several interactive “cool zones” where kids can play.

P.S. offers lots of details for the buck. Polo shirts are regularly $16.50 to $29.50 and the promotion price range is $8.99 to $19.99. They have a variety of emblems and stitching, hoodies are fake fur-trimmed, lined with contrasting fabric or decorated with signature graphics, $29 to $49. P.S.’ version of Converse sneakers are lined with red hearts; jeans with patches and a signature pocket design are $39.50, and puffer vests in bright orange and turquoise, $49. For boys, there are rugby shirts with patches, washed twill jackets and T-shirts screen printed with monsters and a monkey wearing a football helmet.

Playful metallic change purses shaped like squirrels, owls and other woodland creatures can be clipped onto backpacks and animals turn up in other representations, such as a screen-printed T-shirt with a sharpe dog wearing a tiara and bling-y ring. Prices are 10 to 15 percent below Aéropostale’s.

The company said it has created a new store experience with P.S. Amorphously shaped ceiling panels with recessed lights are meant to loosely represent clouds. Large apothecary jars throughout the store are filled with Super balls, gum balls, jolly ranchers and pencils. (The contents are not for sale.) In addition to the cell phone cool zone, there’s a carnival mirror that distorts the appearance and a photo mirror embedded with a TV screen. Kids stand in front of the mirror and press a button to photograph themselves. Their image appears on a TV that looks like it was drawn on the mirror and their likeness is also tricked-out with embellishments and graphics.

The red dressing room area with its long tufted red bench looks like something out of a Dr. Seuss book. Each dressing room also contains a bench and a surprise greeting or symbol. “Here’s looking at you kid,” is written backwards on the wall opposite the mirror in one room. Look at the mirror and it reads correctly. Each room also has a white speaking tube. The tubes, which snake across the ceiling to the red bench, look like exposed pipes and carry voices to and from the fitting rooms.

While the store is kid-centric, thought was given to the comfort of grown-ups, too: there’s a large red pleather sofa where mom and-or dad can cool their heels.