Scouring the aisles of the International Contemporary Furniture Fair. 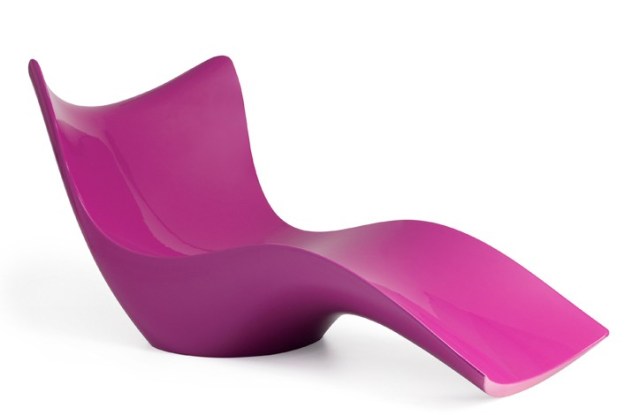 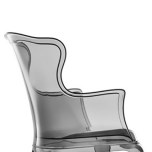 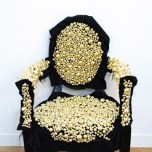 Sean John and I share a certain aesthetic. Yes, that Sean John. I learned that on Tuesday while perusing the aisles of the International Contemporary Furniture Fair at the Javits Center, which I hit just as a parade of mortarboard-appointed NYU Tisch students wended their way toward whatever area of the convention center would soon offer up their precious degrees. It’s a big place.

One that can take a lot of furniture. Near the front of the vast concourse-level space, I first stopped at no more arcane a proprietor than Plexi-Craft. (When it comes to merch for the home, I’m drawn to plastics like a guest at Dustin Hoffman’s graduation.) There, beckoning me: a very square, flamboyantly proportioned (some might say of questionable taste) acrylic chair, its giant frame forming wide, flat arms on top and open shelving for whatever accoutrement (here sighted, a six-pack of water) on the bottom.

Allen Frechter, a second-generation Plexi-guy who with his brothers decided to maintain the company after their father died several years ago, explained that Benjamin Noriega-Ortiz commissioned the design for Diddy’s apartment. There, Frechter said, it’s part of a major sectional affair, with cushions in ivory faux fur. This one was more discreetly appointed, in orange satin. “When I saw it, I said to Benjamin, ‘I think we can make a product out of this.’ ” And voìla! Crystal-clear indiscretion. (As for that shared aesthetic, my conclusion is based not on this one example. Rather, hearing the chair’s origins, I recalled the last Seventh on Sale, at which I had been captivated by a grand, over-the-top silver leaf bed by Ralph Lauren, dressed, if memory serves me, in lush white linens with a dash of faux fur. Word was that the only other interested browser was one Sean John Combs.)

It’s always interesting to step out of one’s own bubble. Who in fashion isn’t fascinated by furniture design? While some of fashion’s biggest names regularly haunt the adventurous Milan Furniture Fair for ideas that influence their own work, ICFF, which ended on Tuesday, is unapologetically commercial, less about what’s coming than what’s here now. Apparently, what’s here now is a lot of stuff in the plastics family, making me a tad nervous about, among a few other pieces, my see-through mock-French head-and-footboard procured years ago when the flea market was still on Sixth Avenue. Is it heading toward cliché? Or, worse, like something first-apartment types can pick up at CB2 for a song?

Still, a certain glee set in upon the sighting of Pedrali’s Pasha chair, designed by Claudio Dondoli and Marco Pocci, a glossy polycarbonate take on a curvy wing classic available through the Chair Factory on Bowery. I first went crazy for its feisty fusion of girliness and edge back in October at the Pratt Legends benefit, when my friend Marjorie Kuhn did a fabulous job of glamming up a vacant party space at 7 World Trade Center. But then, if Pratt can’t make a raw space sparkle, what institution can?

As often happens with a given fashion season, ICFF exhibited a clear dichotomy between hard lines and curves, as in the contrast of those two chairs. Also all angles: Nurseryworks’ Hollis Crib, designed by Daniel Fong and inspired by Charles Hollis Jones, and most of the outdoor seating. Conversely, Vondom’s voluptuous fuchsia Surf Chaise by Karim Rashid stood out as dramatic and inviting. Sales manager Prospero Risiglione noted that some relatively new manufacturing process has made rotational molding easier, thus opening the way for more diverse and accessible curvature in resins.

Among the more artful offerings, Venezuelan artist Andres Ferrandis’ tables, which he designs under the label Art plus T, incorporate the play of light and shadow. Circles cut into marble and acrylic tables create bilevel surface interest, on the pieces themselves and on the floor, the latter changing along with the light.

Another intriguing nonstatic table concept came from Warren Cole, a young man based in Chattanooga, Tenn., attending his first trade fair for his Bubblecollection. He brought a single item, a stainless steel-framed table the surface of which features jets of water under tempered glass, the perpetual (when plugged in) motion at once soothing and mesmerizing.

Far from soothing, but utterly fascinating, the show’s most deliberately high-minded and most spectacular offering: a pair of chairs by Korean artist and furniture designer Shawn Soh. (Unfortunately, Soh was nowhere in sight during my two laps around the floor; I would have loved to have chatted.) The traditional round-back frames are covered in sturdy unhemmed black fabric, their backs and seats affixed with dense pilings of bright gold spheres for an intense, effervescent effect. Not exactly seating to cozy up in with a six-pack of water or more potent libation, but Sean John might find an available corner just the same.

Twenty-four/seven fashion is a tough habit to break. So many people in this most intimate of global industries must feel as I do, a bit in awe of our friend Anne She’ll-Always-Be-Waterman Bassin as she embarks on her flexibility phase. Anne stressed to me that she isn’t abandoning fashion for good. “I just don’t believe in giving 85 percent,” she said. Nor has she ever, since a supposed break from college for a political internship jump-started a career that led ultimately to her long run at Michael Kors, from which she’ll leave her post as senior vice president, global image, at the end of the month.