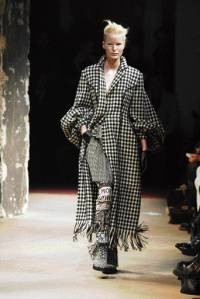 Yohji Yamamoto: You ain’t nothin’ but a hound’s tooth. But you look doggone good. Guests settling into a Yohji Yamamoto show arrive with certain expectations. We know the designer will showcase his vivid imagination and masterful technique via a singular theme, richly developed. But beyond that, we’re clueless. Yamamoto has proven time and again that he is capable of turning his attentions any which way — refined, raw, jubilant, dour, outlandish, sedate.

In the fall collection he showed on Sunday night, his second since shifting his ready-to-wear show to the couture schedule, Yamamato went for the strong and hearty, centered around big, brash, houndstooth checks — layers and layers of them, piled on, wrapped up, fringed, swathed in giant shawls draped for warmth and drama. In so doing, he took issue with the notion that delicacy is an essential element of chic.

He set up his argument with a bold fringed coat and short skirt, worn with street urchin leggings and butch hair and makeup. Then out came a series of variations on the theme, each one strengthening his point, until Yamamoto was fully engaged in the grand gesture, working pattern against pattern and introducing red-and-black lumberjack fare. That play, however, was nothing compared with the range of cut, as out came shapes — some fluid, some with strong shoulders, some molded at the hips — that could variously keep a forester, Sonja Henie and Joan Crawford all looking divine.

But such antithesis is Yamamoto’s forte. As a result, in the midst of the abundance of fabric and layers, he worked in some sleek black suits with his typical intricacies of construction, and spectacular leathers, including a très Parisienne zippered trench, and others with raw-cut hems that contrasted otherwise chi-chi proportions.

True, the clothes were difficult, but then, nobody ever suggested that Yamamoto’s clothes appeal to pedestrian tastes, which is why last season he made the move to the couture schedule. And while he hardly courted the Oscar set with this collection, even Yohji did a movie-star turn with a fitted black coat with billowing sleeves that opened up over a short skirt. As for that remarkable multichecked suit veiled in black that closed the show, its tiered, wired construction made it a checkmate — of the haute order.