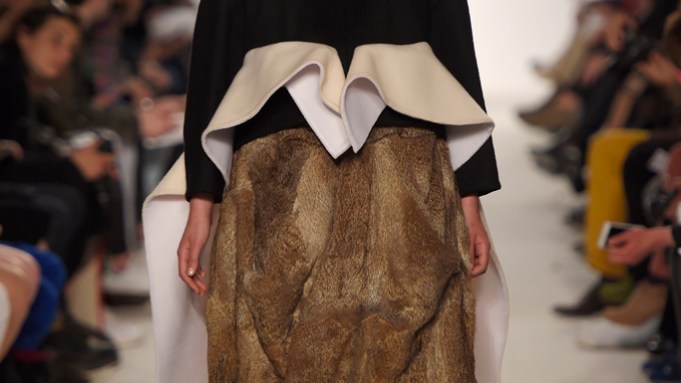 It’s fashion, and I feel like wearing her clothes — the pants, the open back with the chic leather belt — I see myself in them.”

Those words, spoken by Caroline de Maigret, a member of the fashion jury at the 30th edition of the recent Hyères International Festival of Fashion and Photography, were music to the ears of 28-year-old Annelie Schubert, who was named the winner of the Première Vision Grand Jury prize. She impressed the judges with her sculptural silhouettes hinged mostly on an open back.

“We liked her work right away,” said Virginie Viard, Chanel’s creative studio director and presi- dent of the fashion jury. “She uses fabrics such as Neoprene and tweeds. There is a beautiful color palette; it is very elegant, very refined.” Observed filmmaker Loïc Prigent, “We asked ourselves: Where will this designer be in 10 years? We had the specter of Anthony Vaccarello hanging over us. He is a fantastic example.” Schubert — who grew up in Göttingen, Germany, and now lives in Berlin — earned a bachelor’s degree in applied science in Hamburg, interned with Haider Ackermann in Antwerp and did master’s studies at Berlin’s Weissensee Kunsthochschulen.

She told WWD that she has long wanted to try her luck at Hyères, which has been a springboard for not only Vaccarello but also Viktor & Rolf and Felipe Oliveira Baptista. She took the leap in her final year of studies, saying, “It was the right time.”

After the competition, Schubert took a two-day road trip along the French Riviera with her brother, who served as her assistant. WWD fit in a quick phone Q&A with the designer as the duo headed back to Berlin in a van filled with her collection.

Were you always destined to become a fashion designer?

I have always been interested in fashion. It be- came clear when I started my bachelor’s degree in Hamburg.

Why did you decide to intern for Haider Ackermann?

He was my favorite. I was really happy it worked out. I have admired his work for a long time, his use of materials, draping. I learned a lot by working in a professional environment. The list of designers I admire is long.

What’s the idea behind the collection you presented in Hyères?

The idea was to play with the apron-style silhouette, to transform it into something elegant and opulent — to combine elegance and casual for outerwear with a covered front and open back. You see the different layers underneath. You can wear it in different ways.

I was in the print atelier in university. We were wearing aprons. I wasn’t working a lot. I saw the others around me and thought, “Hey, I want to work with it.” I really like the proportions it gives to the body; it’s really an elegant length. The apron is one of the oldest traditional garments.

I mixed cold white chalk with dark shades. I used black and a dark khaki that is almost black, and also crème rose and crème yellow. I like to put them together.

Virginie Viard noted your use of tweed and Neoprene.

It’s nice to put them together, because tweed has this traditional character and Neoprene a modern character. Both fabrics have unique qual- ities: a character of coziness, an ability to create volume and silhouette. Also, I used transparent organza silk to make the apron, thus mixing the heaviness of tweed and the lightness of silk.

A lot of vintage….I don’t have so many garments. I love to wear my father’s sweater; it has nice cashmere in it.

What’s next for you?

I will have the opportunity to go to New York in July to present my work [as part of the Grand Jury Prize; the winner gets to showcase his or her collection at the Première Vision Preview show] and to work with Chanel specialty ateliers [which Chanel controls through its Paraffection subsidiary]. I will have a collaboration with Petit Bateau, which I am also looking forward to. My mother is from Brittany. I love sailor stripes; I grew up with sailor stripes.

To have a job in a house first. It would be great. I have a lot of work to do now.

RELATED STORY: They Are Wearing — Hyères International Festival of Fashion and Photography >>