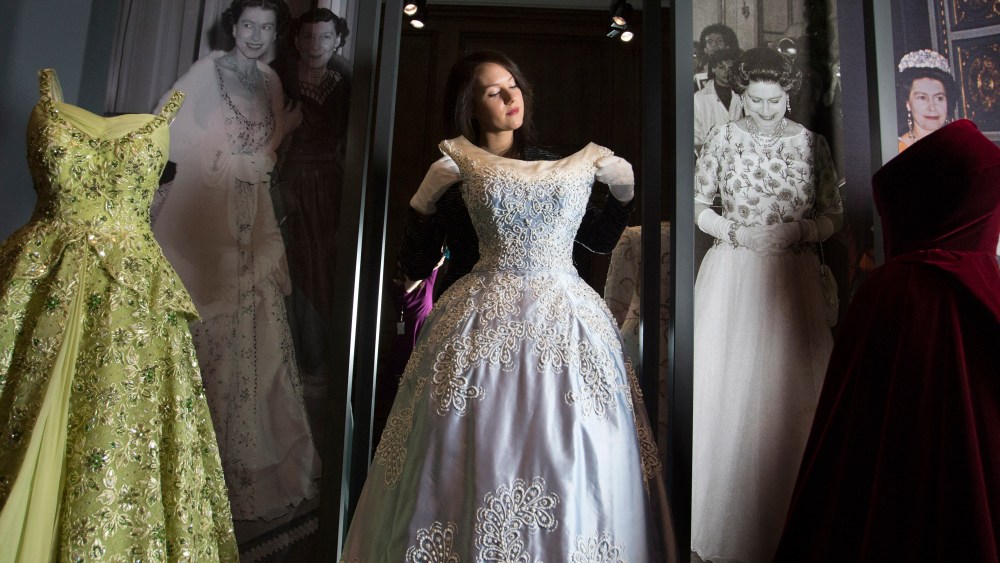 LONDON — Dresses, capes and gowns from the wardrobe of Queen Elizabeth — one of the world’s oldest and most faithful couture clients — will go on display this weekend at Buckingham Palace, in all their sparkling peacock glory.

“Fashioning a Reign: 90 Years of Style from The Queen’s Wardrobe,” the second installment of a three-part exhibition dedicated to the queen’s wardrobe, opens a window on the monarch’s private life and how she engages with the public via her clothing, hats and military attire.

The exhibition, which stretches across three royal palaces, is the largest display of the queen’s dress ever mounted and is meant to mark her 90th birthday this year.

The Buckingham Palace show, which runs until Oct. 2, is also an homage to the queen’s longtime couturier Norman Hartnell, who created her wedding gown — and six years later — her coronation dress, which are on display together for the first time.

A host of Hartnell dresses, including two black silk velvet, New Look-inspired gowns, are also on show. She wore them as a young woman, before she became queen. It was one of the few times she was able to wear black as a fashion statement, and without it signifying something more serious, such as mourning, or a visit to the pope.

The looks on display are a great example of couture, from the extraordinary to the everyday.

The now-famous coronation dress is a white duchess satin gown with floral emblems representing the queen’s nine dominions picked out in shiny threads, seed pearls, sequins and crystals, but it also bore a secret code. Hartnell added an extra four-leaf shamrock on the left side of the skirt for good luck, so that Princess Elizabeth’s hand could rest on it during the ceremony that transformed her into a queen.

The charm was clearly a lucky one: Last year, the 27-year-old princess who was crowned in 1953 became Britain’s longest-reigning monarch.

The coronation dress is also emblematic of how closely the queen has worked with her dressers and couturiers over the years, to-ing and fro-ing designs and swapping ideas. “It’s very much a dialogue,” said the curator Caroline de Guitaut, adding that she wanted the show to reflect the balance the queen has always sought between creating her own style, and ensuring the clothes do not get in the way of her work.

This show, however, isn’t just about famous old designers, but about how the queen was open to emerging talent. In 1952, when she needed a ceremonial mantle for the Order of the Garter ceremony, the monarch turned to fashion students at London’s Royal College of Art for ideas. She eventually picked one student’s design that featured a (radical for the time) zip-front design for ease and comfort.

The Buckingham Palace exhibition is the centerpiece of a landmark show taking place at Holyroodhouse in Edinburgh, Scotland; Buckingham Palace, and Windsor Castle. All of them showcase the queen’s clothing from different points of view.

The Buckingham Palace show is also the largest, and forms part of the annual Summer Opening of the State Rooms. Each summer when the queen and the Duke of Edinburgh move their household to Balmoral, Scotland, Buckingham Palace opens to the public.

De Guitaut said during a walk-through that another one of her aims was to show how dress has “supported” the queen in her multifaceted roles. The queen has never dressed to blend in, but to stand out in a crowd. Her outfits over the decades reflect a life on the red carpet — in its broadest sense.

The sleekest looks include a blue-and-white boxy jacket and “shorter” hemline skirt by Hartnell in a nod to the new proportions of the Sixties, and a green-and-white patterned pussy bow dress — also by the designer — that the queen wore in 1977 during her Silver Jubilee tour. The latter would not be out of place at Selfridges or on the pages of Net-a-porter.

There’s a dark bougainvillaea pink coat she wore for the opening of the Channel Tunnel in 1994, and a deep purple Hardy Amies suit she wore in 1986 during a visit to the Great Wall of China. Both outfits clearly took context and landscape into consideration. There’s also the sparkly, putty pink dress by Angela Kelly that the queen wore to the opening of the London Olympics in 2012.

Two dresses were made, one for the queen’s stunt double who famously parachuted into the arena at the end of the James Bond-inspired short film shown to mark the kickoff. De Guitaut said color was a key element in the design of the outfit: The queen had to choose a shade that was not representative of any of the 205 countries taking part in the games.

There are also rooms dedicated to the queen’s military attire, and to her numerous hats — a field of bright blossoms on display against a backdrop of black. The queen has worked with about a dozen milliners since the 1930s, and their creations include scarf wraps from the Seventies, cloches, bretons, ones with asymmetric brims, flowers or fringes. All of them have been designed to frame and highlight — rather than shade — her face.

While one of her aims has been to stand out in a crowd, another has been to pay homage to fellow royals and dignitaries. For a state visit to Ethiopia in 1965, she wore a green Hartnell dress with the Insignia of the Order of Ethiopia, while she chose a mimosa-yellow silk-chiffon dress designed by Ian Thomas for her 1974 visit to Australia. It’s embellished with sprigs of wattle, Autralia’s national floral emblem.

The first of the three exhibitions to open was the Holyroodhouse display, which explores tartan in royal dress. That show, which runs until Oct. 16,  features tartans that are personal to the queen. Some were designed for the royal family by Prince Albert and Queen Victoria and are still worn by the royal family today. There’s also kilt belonging to the queen from the early Fifties that she paired with a tweed jacket by Hartnell.

The third show will open at Windsor Castle on Sept. 17, and feature evening gowns worn on special occasions as well as amateur theatrical costumes the queen and her family wore for childhood pantomimes at the castle.

All three exhibitions have been curated by de Guitaut, who is senior curator of decorative arts at The Royal Collection, one of the last great European royal collections to remain intact.