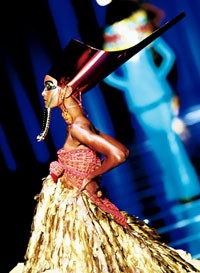 Christian Dior: Move over, La Liz. Step aside, Steve Martin. Meet pop culture’s latest convert to the lure of ancient Egypt, John Galliano. Make that haute culture, because for all-out, would-that-you-could-take-it-with-you opulence, the couture collection Galliano showed on Monday afternoon just might rival the goods found in the tomb of the boy king himself.

This was a dazzling, dizzying Exhibit A of the kind of decadence that thrives on remarkable beauty and on the danger of living without limits. Along the way it flaunted once again both Galliano’s genius and his outright contempt for playing it safe. His is a world in which no latter-day Cleopatra can swath herself in too much gold, or drip too many turquoise baubles from her neck. Her feet glide with the provocation of pearl strands festooned in multiples, no matter how impractical; her eyes embrace the weight of layer upon layer of lacquered glitter. In this world of glammed-up pleasure, everyone lives to feel good till it hurts.

It’s a place in which seemingly divergent worlds converge — as they always do in a Galliano reverie. So excuse you for missing the obvious — obvious, that is, at least to Galliano’s remarkable mind — that the frocks in all of those ancient Egyptian drawings bear an uncommon resemblance to Christian Dior’s “H” silhouette from the Fifties: linear through the hips and then full from there. A stretch? This is Galliano’s Dior, not a stronghold of pragmatism.

He opened with a whimsical video montage of illustrations depicting old Egypt as a Liz Taylor-Bond Girl fashion fantasy. He then let loose with a collection laden with gold, gold, gold, but also crystalled silks, bodices inset with fur, ruffles, bows and elaborate embroideries, along with some major extras in Néfertiti headdresses and sphinx masks. Sometimes he expressed the “H” with relative calm in terms of cut, as in one dress with a plain, A-shaped skirt that made a canvas for Egyptian tomb-like paintings. At others, he let the fullness explode into a ruffly froth. Of course, one shape is unlikely to do it for Galliano, and so he also showed beauties in bondage, including a spectacular faux-unraveling white chiffon — the most spectacular riff on mummification this side of a nerdy archeologist’s dream date.

Throughout, the Galliano bravado pulsed. But all of this comes at a price — and not just of the muscled-up Euro kind. Increasingly, he seems to feel that he must always be ever bigger, grander, more spectacular. Yet for all its theater, this collection offered little news, and ultimately left one wide-eyed but not quite breathless with wonder. Although Galliano seems not to believe it, sometimes less — even a tiny bit — really is more. Would that he would give his audience a little downtime; he would make the multiple crescendoes all the more enticing.

Yohji Yamamoto: The black-on-black invitation suggested sobriety, as did the clothes strewn haphazardly about Yohji Yamamoto’s fall ready-to-wear runway. But then out came the first model wearing a dress and cropped pants in mixed floral prints. She stopped to pick up and put on one of the tossed items, ultimately adding another floral layer. In rapid order, several other models followed suit. They wore foppish shapes to be sure, (a bit Edwardian-rock ’n’ roll), but did their patterns indicate that Yamamoto’s autumn would soon be busting out all over in a glorious display of pattern, color, and — just maybe — femininity?

Nope. Yohji was just teasing. Because, after hinting at a garden romp, Yamamoto abandoned its promise, rushing back to black and a mood more sturdy than sober. This collection bore an aura of practical chic that bordered on defiance, as if Yamamoto refuses to wax fanciful now that fancy rules the fashion moment. He is a phenomenal tailor and, in that respect, the clothes were gorgeous — impeccable cuts with the assured swagger inherent in perfection. There were dramatic coats and capes, some with military-cum-Florence Nightingale authority, and then moments of relative softness, most notably in two looks finished with double-bow closures, delivering a subtly sweet schoolgirl attitude. Conversely, he draped some pieces with heavy chains and worked others with overstated pockets that could double as built-in handbags. In another context, one of these, an ultra-chic suit, could look plenty sexy.

Similarly, the tomato red ballgown that closed the show could play beautifully into fashion’s festive mood. But unwilling to let go of his ambivalence, Yamamoto shrouded it until the show’s final moment under a heavy, nursely cape. On one hand, it’s hard not to applaud the different drummer, especially one as consummately accomplished as Yamamoto. On the other, these days fashion is in the throes of a fabulous, flamboyant party. Wouldn’t it be all the merrier if Yohji would stop by with a six-pack?