Ralph Lauren described the prince as having "a quiet kind of elegance, understated and unfashionably fashionable. His timeless sophistication made him the epitome of a true gentleman.”

By Samantha Conti
with contributions from Tianwei Zhang, Jean E. Palmieri
on April 11, 2021

Queen Elizabeth II and Prince Philip, Duke of Edinburgh during a musical performance.

LONDON — Fashion figures and royal observers said they’ll remember Prince Philip for his charm, sense of humor (at times blunt or controversial), understated elegance and personal style. The prince always knew how to behave in public, and to hang back with the sort of poise and grace befitting of a monarch’s consort.

Penny Junor, who has penned myriad books on members of the royal family and other public figures, described Philip’s style as “very relaxed. He did not stand on ceremony.”

She said his preference was to travel in a black London cab rather than in a Rolls-Royce. “And he made people laugh — he was good at putting people at ease.” She said that one would know immediately where Philip was in a room by the laughter emanating from the space.

As a British Royal Navy officer, the prince learned early on about discipline, restraint — and how to wear a uniform to best effect. His daytime uniform long featured spread-collar shirts — mostly white; a colored, striped or subtly patterned tie, and a jacket with a natural shoulder. The crease in his trousers was always pronounced and his pocket square white and straight like a piece of cardboard.

“He was always elegant, stylish and impeccably dressed,” right down to the angle of his tweed cap, said Anne de Courcy, the English biographer and journalist.

Tommy Hilfiger said he saw Prince Philip “as a true gentleman. His style was timeless with a sophisticated Old World charm. He obviously was very respectful of others, which is more important than anything one could ever wear.”

Ralph Lauren said the prince “had a quiet kind of elegance, understated and unfashionably fashionable. His timeless sophistication made him the epitome of a true gentleman.”

James Sherwood, author of “Savile Row: The Master Tailors of British Bespoke,” told WWD in 2012 that “One does not see [Philip] indulging in the sartorial high jinks of a Duke of Windsor, and he resolutely avoids fuss and unnecessary detail.” 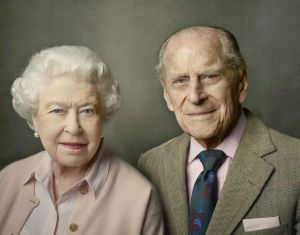 “You do not see clouds of silk exploding from his breast pocket. You will not see extravagant tie knots in rich patterns. The duke necessarily chooses sober and robust British cloths. Like the Queen, his choices are practical,” said Sherwood.

His longtime tailor was John Kent, of Kent & Haste on London’s Sackville Street, off Savile Row. But while he may have had a tailor on tap, the prince was known — like so many of the royals — for recycling his wardrobe.

In August 2008, just as the world was melting into the great financial crisis, the duke famously asked Kent — who was then working at Norton & Sons — to restyle a favorite pair of baggy herringbone trousers from the ’50s, making them narrower and more contemporary-looking.

At military events, the prince often wore the same naval uniform he donned for his wedding to Princess Elizabeth in 1947. For new military attire, he turned to Kashket & Partners, who outfitted Prince William and the page boys at the latter’s wedding.

“His style is very English and classic — and it hasn’t changed for years. And he’s amazingly fit and slender,” said Majesty Magazine editor in chief Ingrid Seward in a 2017 with WWD.

The duke was also able to work a sporty weekend look with ease. He preferred cords to jeans, and was never without his waterproof gear, tweeds and flat caps for those blustery weekends at Balmoral in Scotland or sunny strolls on the grounds of Windsor Castle.

“Because he was something of an outsider, he always went out of his way to look as quintessentially British as possible. Consequently, he was obviously Britain’s best-dressed man,” said Dylan Jones, BFC chair of men’s wear and editor of British GQ.

Roger Tredre, MA Fashion Communication course leader at Central Saint Martins, concurred, describing the duke as “a great ambassador for classic British tailoring, particularly the double-breasted suit. In the 1950s and 1960s, he was genuinely influential — a young man with model looks who wore everything with a sense of ease, from military uniform to the kilt to the cricket sweater. As to his relevance for our times, it’s the understated outdoor looks that stick in the mind: the polo field attire, the sailing jumpers, the Riviera bathing trunks.”