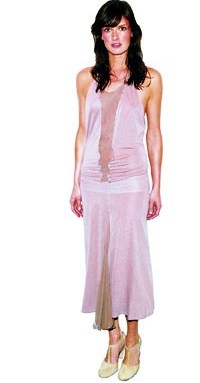 Davies: With a season under her low-slung belt, designer Erica Davies (formerly of Richard Tyler, who sat in the front row, and Marc Jacobs) put out a clever sophomore effort that continued the principles she employed last season. Once again, in lieu of a runway presentation, she showed a short film by beau Clement Jolin that featured models walking the parched terrain of Death Valley. The stark landscape, with the backdrop of the snowy mountains, offered a beautiful contrast to Davies’ fluid, street-wise clothes. Like the quiet Welsh-born designer, her understated collection spoke volumes, especially in little details such as the seams running down the skinniest of brushed cotton trousers and the tiny silver studs dotting the neck and waistline of a peacock green jersey dress. The Zen-like balance of hard and soft came together best in a slim-fitting black moleskin trench that is certain to be a hit with customers this fall.

Trina Turk: Striving to tell a story with her collection, Trina Turk eschewed the bare, white catwalk at Smashbox Studios in favor of her Hollywood Regency-style boutique on trendy West Third Street. Staging nine vignettes in the manner of the Passion Plays, models vamped in emptied-out cubicles, displaying Turk’s strong 40-piece line that was a cheeky nod to sexy Brit secretary Miss Jane Hathaway of “The Beverly Hillbillies.” There was a cream-and-black floral-print velveteen skirt and coral cashmere twinset, a pastel-and-olive tweed suit, enlarged houndstooth corduroy jackets with matching pencil skirts and checked suits. In all, the chic and flirty line can be best described as mid-century modern for the stylish secretary. Unfortunately, however, the exaggerated cabbage rose-printed separates that are Turk’s signature pattern this season looked out of place among the simpler looks that dominated the show.

Sue Wong: A belly dancer dressed in fiery colors opened the Sue Wong show, a clever introduction to the collection’s theme: the ancient Spice Road that runs through the Middle East. Wong believes in making an impact, and her fans flock to her presentations expecting theatrical fashion operas sans song. To this end, the designer spun a story with her elaborate dresses that played on a fantasy of harems, the Spanish Moors and opium dens. And thankfully, the theme kept Wong focused, an improvement from the disparate motifs that hampered her previous collection. As always, her favored handkerchief-hemmed chiffon and lace were present, this time embellished with arabesques in sequins, beads and fringe. On occasion, however, the designer’s need to wow her faithful clients with over-the-top ornamentation overwhelmed some lovely pieces. Her bridal collection, for example, featured an elegantly classic floral lace dress that was overshadowed by a massive cape covered in balloon-like flowers. Yes, her take on glamour can be heavy-handed, but behind the wild antics were some red-carpet-worthy dresses.

Sheri Bodell: Eighties revival is a never-ending trope these days, and it was just a matter of time before the era’s hair bands, with their videos featuring gyrating models, served as inspiration for the runway. Sheri Bodell certainly couldn’t resist. She showed white leather and red lace, zippered biker pants and negligee-like tops, which, at times, appeared too literal an interpretation of the theme, especially with the repetitive leather buckles, slashed skirts and grommet studding. These overwrought motifs took away from the pretty, pleated chiffon tops and the lean, well-cut trousers. Where the theme did work was with Bodell’s cheeky references to Sunset Boulevard babes hanging out at the Rainbow Room, as in the rosy, blush fox fur cropped into chubbies. Ladies look to Bodell for flattering, flirty clothes, and, despite the overstyled show, the chiffon Empire dresses and tops, the great ruched ponchos and the slim, unadorned pants answered the call.

Lords: Jane’s Addiction ax man Dave Navarro, in second-skin black snake pants and a blood-red snake biker jacket, kicked open the Lords show on Wednesday, which was certainly appropriate considering the line is a longtime Melrose Avenue institution for rock’s baddest bad boys — and a few maverick girls. Designer Nabeel Jaber used Bianca Jagger as his muse for this collection that went far beyond the usual rock fare. In fact, luxe was the order of the day here, as seen in his beautiful strapless cashmere A-line dresses and sweaters as well as his Savile Row-worthy pinstriped suits in tropical-weight wools. Altogether, it was an elegant and tight group of looks that was anything but groupie gear. The occasion also marked the house’s decision to move into wholesale, particularly for its small, yet rapidly expanding, women’s collection, which up to now has mostly been a custom-order concern.