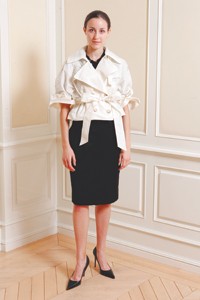 NEW YORK — Rachel Roy is finished with the contemporary market.

“I am sick of the jeans and beaded tanks,” she said, hanging clothes on a rack in her new showroom at 25 West 39th Street, one of the former Tommy Hilfiger showrooms. “I’ve really never understood that kind of dressing; it just isn’t me.”

While filling her duties as creative director of Rocawear juniors and children’s lines, Roy was given the opportunity to start her own collection last year, called Rachel Roy. Her backers at Rocawear noted the importance of contemporary and stressed that her collection should fit into that market. Her first line of beaded tops, shrunken blazers and miniskirts was enthusiastically received by retailers, being picked up by such high-end specialty stores as Bergdorf Goodman, as well as Big Drop.

But a lot has changed in the past year. First of all, her husband and business partner, Damon Dash, left his post as chief executive officer of Rocawear, walking away with a $30 million settlement. With him, he took all his own businesses, which include Tiret watches, Armadale vodka, Pro Keds and, of course, Rachel Roy. Now that Dash’s new business is being built in the former Tommy Hilfiger offices, Roy said she finally has the creative freedom for which she was looking.

“By changing things, I had to see many of my contemporary accounts drop me,” Roy said. “But that was a choice I made in order to make a collection that I loved and believed in.”

Big Drop no longer carries Roy’s line, but Bergdorf Goodman and Henri Bendel do, and Nordstrom, Neiman Marcus and Intermix just picked up the line.

“This is a line for working women in their 30s who always want to look put-together, chic and sexy,” Roy said. “Being sexy doesn’t have to mean showing skin. My clothes flatter your shape, but at the same time, there is a lot of fabric to hide it. I find it to be very sexy.”

To help get her message across, Roy plans to open her first store in September at 112 Hudson Street here. The 2,500-square-foot space, spread out over two floors, will look more like an art gallery than a store, with each look displayed on mannequins rather than racks, she said.

“When you see these clothes on the hanger, they just don’t have the same appeal,” Roy said. “I know that stores can’t possibly showcase everything on mannequins, so the store will be my way to get my point of view across.”

Roy said that even with the new focus, she should still bring in about $3 million in wholesale sales.

“Pro Keds is doing remarkably well, and all without advertising,” Dash said, adding that he plans to launch a Pro Keds ad campaign for fall.

Besides that, Dash is working on launching his own men’s sportswear line, called the CEO Collection. He said getting himself back on his feet has been tougher than he thought it would be, but he hopes to have the collection ready for October retailing. Following the men’s wear, he said, he plans for a junior men’s line under the CEO label and designed by Roy.