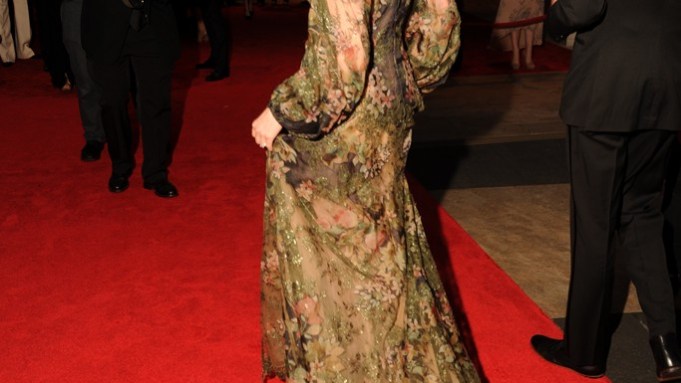 LOS ANGELES — As nominations were unveiled Thursday for the 70th Annual Golden Globe Awards on Jan. 13, the red-carpet race kicked into high gear, setting in motion a complex dance involving celebrity stylists, designers and their liaisons, and the suddenly media-swamped actresses whom everyone is vying to dress.

Although stylists have been considering designers and dresses since the last runway cycle in September, most hold out for the most up-to-the-minute designs slated for the January couture and February ready-to-wear shows. Top stylists with long-standing fashion house relationships have already been privy to some versions of these creations via sketches customized for particular clients, putting them ahead of most editors as far as previewing a house’s designs.

“I’ve had a sense for the last two months of which girls I work with who would most likely be attending the Globes, SAG [Screen Actors Guild] Awards, etc.,” said stylist Cristina Ehrlich, whose clients include Best Supporting Actress nominee Amy Adams and Best Actress, Television Comedy or Musical nominee and Globes host Tina Fey.

“Partly why I moved from Los Angeles to New York has been to cultivate relationships with designers so that I can plant the seed throughout the year and get a sense of who wants to work with whom so that out of the gate we can work directly with a designer to make it a seamless, high-end experience that’s exclusive,” Ehrlich said. “I’ve seen some sketches in the last week and some relate to pre-fall collections, which often play into fall, while others are from capsule collections that are more representative of red-carpet season rather than a runway collection.”

Then there is the matter of logistics, since actresses and their stylists are often on opposite coasts or sides of the world, depending on current movie filming schedules, international premieres and the like. Meanwhile, the designers are mainly in New York or Europe, if not in some far-flung holiday destination for a short respite in a few weeks’ time.

This necessitates several rendezvous to decide on a dress and complete fittings. Many will make under-the-radar stops in Los Angeles, and many stylists and their clients will arrange their schedules to come to them. FedEx also proves invaluable as a means of transporting sketches, swatches and actual gowns, but there is no replacement for a one-on-one fitting.

“I will have to travel to fittings for sure,” said Elizabeth Stewart, who styles Best Actress nominee Jessica Chastain, who is currently promoting her film “Zero Dark Thirty” internationally in between appearing on Broadway in “The Heiress.” “It’s like a math equation.”

Given Chastain’s fondness for European designers — she wore Givenchy couture to last year’s Globes and Alexander McQueen to last year’s Oscars when she was a Best Supporting Actress nominee — there likely will be some transatlantic miles logged.

Gilles Mendel, who hosted a ladies’ lunch in Beverly Hills on Thursday, found the timing to be fortuitous.

“Today was the perfect day to be here,” said Mendel, who dressed Claire Danes at last year’s Globes, where she snagged the Best Actress, Television Drama statuette. Noting that he doesn’t have a specific silhouette or color palette in mind for the Globes, only that “its more fun than the Oscars,” Mendel said, “I have good relationships with several stylists, so often they come to New York. But all the actresses love Hollywood glamour so I try and give it to them.”

Musical chairs at the European fashion houses has added a level of excitement and anticipation long unseen on the red carpet. From Alexander Wang at Balenciaga to Hedi Slimane at Saint Laurent and Raf Simons at Dior, not to mention current free agent Nicolas Ghesquière, fashion insiders are holding their collective breath.

“I loved the YSL show, and Marc Jacobs,” said stylist Tanya Gill, who hoped that the graphic black-and-white trend appears on the red carpet next month.

Said Stewart, “It’s exciting to have so many brilliant young designers doing such amazing work…and such a privilege to get to work with them in this context. I am really open to anything. I can’t wait to see what everyone will wear.”