May Department Stores has purchased the Marshall Field’s chain and some Mervyn’s units from Target Corp. for $3.2 billion in cash. 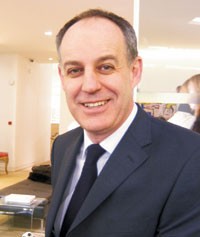 LONDON — Vittorio Radice, the star retailer who joined Marks & Spencer plc last year with much fanfare and a golden hello of nearly $2 million, has quit the company one week after new management moved in to fight a takeover bid.

This story first appeared in the June 10, 2004 issue of WWD. Subscribe Today.

M&S — which is still on alert for a possible second, revised bid from retail tycoon Philip Green — said in a statement Wednesday the decision was made “by mutual consent.” Radice, who was head of home and general merchandise at M&S, will exit on Friday.

“Vittorio is a hugely talented retailer and we would like to thank him for his valuable contribution to the company,” Stuart Rose, M&S’ newly appointed chief executive, said in the statement.

Radice’s departure, while not completely unexpected, was surprising for its speed. His recruitment to M&S from Selfridges was seen as a coup, and his Lifestore home furnishings format was considered a major development in lifestyle retailing. Many of the concepts Radice introduced at Selfridges have been widely adopted by department store retailers worldwide, from a greater number of restaurants in stores to focusing on brands to selling nonapparel items, such as iPods.

But there were questions about Radice’s future from the moment Rose arrived. In a conference call with analysts after the announcement, Rose said, “Quite frankly, I think Vittorio had decided he wanted to move anyway. I would have narrowed his responsibilities if he stayed.”

Rose has named Maurice Helfgott, widely described as an M&S golden boy, as executive director of men’s wear, children’s wear and home. A 37-year-old Harvard Business School graduate, he’s been with the company since 1988.

As reported, Kate Bostock will be director of women’s wear, starting in the fall. She was formerly product director of the lucrative clothing and accessories brand George at the Wal-Mart-owned Asda. She is currently on a leave of absence from Asda.

Despite his far-reaching impact, Radice’s brief tenure at M&S was a difficult one. His Lifestore home project — a sophisticated home furnishings store with a John Pawson-designed house as its centerpiece — did not live up to expectations. Rose told WWD in an interview last Thursday that he was undecided about Radice’s future.

“I have no preconceived notions, and I don’t want to commit to anything,” he said. “I know I have good troops on the ground, and it’s my job to make sure they’re in the right formation. It’s also my job to put square pegs into square holes and round pegs into round holes.”

Radice bowed out gracefully: “I enjoyed my year at Marks & Spencer enormously and we achieved a lot,” he said in the statement Wednesday. “This is a very exciting time for the store.” He declined further comment.

Most M&S-watchers would agree that Radice never truly fit in at M&S. The freethinking, independent-minded executive is fond of referencing everything from ancient Persian markets to fish stalls in his fervor to reinvigorate department store retailing, while M&S at times rivals the British civil service in the glacial nature of its thinking. Selfridges focuses exclusively on well-known brands, while M&S carries no brands but its own.

“To put it mildly, he is much more suited to an upmarket brand such as Gucci, rather than M&S,” said Richard Ratner, head of equities at Seymour Pierce.

Green is meeting with his advisers this week and plans to begin sounding out M&S’ big institutional shareholders regarding a second bid. Sources say it will likely be an all-cash offer of about 10 billion pounds, or $18.4 billion.

George Wallace, ceo of Management Horizons, a London-based consultancy, agreed it was a bad match. “What Radice did in the home division is great — but not for the M&S core customer. It’s too ‘urban chic’ and the prices are too high.”

At the home furnishings division, sales dropped 2.9 percent to $895.2 million from $922.4 million in the 2003-2004 fiscal year. Roger Holmes, who was ousted as ceo on May 31 and replaced by Rose, admitted in the year-end results statement that Lifestore’s “product in some areas has been too contemporary.”

Tyler Brulé, who worked with Radice at Selfridges and M&S, said the retail executive won’t be gone for long. Indeed, earlier this year, rumors were rampant that Radice was the top candidate to replace Domenico De Sole as ceo at Gucci Group. The job eventually went to Robert Polet, a Unilever executive.

“It would not surprise me if Vittorio went off and started his own business in the retail and lifestyle industry,” said Brulé, founder of the creative agency Winkreative. “I can also see him at the upper end of the hospitality industry — as the chief executive of a hotel group or an airline.”

“Maurice is an M&S man through and through: He’s been there for a long time, he’s risen through the ranks and he’s very popular,” said Richard Hyman, chairman of Verdict Research, a retail consultancy here. “He’s seen as a trader, which is absolutely central to success at M&S. He understands product, branding and subbranding. It was a very smart move on Stuart’s part.”

Helfgott started at M&S in 1988 as assistant merchandiser for ladies’ blouses and dresses, and rose to manager at Brooks Bros. He worked in the various women’s product divisions at the store and in 2001 became head of men’s wear. In November, he took over the food division.

On Wednesday, Rose also confirmed the appointments of his two longtime lieutenants: Charles Wilson and Steven Sharp, both of whom joined M&S with him. Wilson will be executive director, in charge of property, IT and supply chain, and will work with Rose on strategy. Sharp will sit on the M&S executive committee and will be responsible for marketing, store development and design.