Raf Simons' strong spring show for Jil Sander proved that the calm after the storm has settled in. 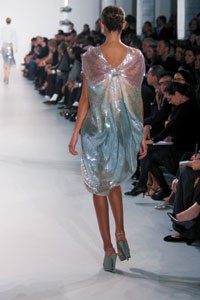 MILAN — Raf Simons’ strong spring show for Jil Sander proved that the calm after the storm has settled in.

“Raf has certainly made his mark as the man of the house,” said Marigay McKee, fashion and beauty director at Harrods in London.

Simons, an influential men’s wear designer, faced the daunting task of revitalizing a fashion house that lacked luster in sales and editorial buzz after founder and designer Jil Sander sold the company to Prada Group in 1999.

Months later, she left the company due to clashes with Prada chief executive officer Patrizio Bertelli and was replaced by Milan Vukmirovic, who did sporty disco flash until Sander returned in May 2003, only to split again 18 months later.

After her second departure, the brand’s creative reins were handed over to its long-standing design team. In February 2006, Prada sold Jil Sander to London private equity fund Change Capi­tal Partners.

Simons joined the fashion house in May 2005 as creative director and presented his first collection for fall 2006. For this spring, the designer peeled off winter’s heaviness with a collection aimed at sensibly chic women of disparate ages. In September, sales for the fiscal year rose 11.5 percent to 145 million euros, or $186.5 million.

“You know that a collection has something to say when you sit up during the show as we did at Jil Sander,” said Linda Fargo, fashion director at Bergdorf Good­man in New York. “Raf built upon his purist foundations with joyful bursts of color that were shockingly beautiful when applied to a perfect collared shirt or architecturally innovative, softly deflated dress.”

The liaison with the past was very much in the Jil Sander vein, as it was in Simons’ inspiration.

“For my second Jil Sander collection, I wanted to show new directions and perspectives,” said Simons. “As my first collection was a tribute to Jil Sander, this time I wanted more energy, which I found in pure vibrant colors, geometric basics and innovating materials combined with fluidity and soft tailoring.”

This story first appeared in the December 28, 2006 issue of WWD. Subscribe Today.

The minimal yet luxe basics were especially appealing to Cedric Charbit, general merchandising manager at Printemps in Paris.

“He redesigned the basics and gave them a must-have quality, cool new proportions and made them sophisticated in a timeless way,” Charbit said. “That said, for the French market we need a bit more edge.”

The pre-spring line, already on the selling floors, has registered double-digit growth, he noted. The color story in the collections is told through white, black, navy blue, mango orange and canary yellow.

Harrods’ McKee said, “Raf is settling in well with a strong showroom offer.” She said that while staying true to the brand’s history, the collection offered a very fresh view.

“The trousers suit was a sophisticated, modern classic, while the tonal sequin dress was amazing and something unexpected from this house,” she said.

That particular dress — an iridescent number with a bow sculpted in the back that displayed Simons’ ability to release his minimal restraint — was dubbed by Julie Gilhart, Barneys New York’s senior vice president and fashion director, as “one of the best pieces of the season.”

“Spring was one big step further into the development of a new statement at Jil Sander,” said Gilhart. “Simons embraced the tailoring heritage at Jil Sander, but oddly enough it has taken a man to introduce the softness of a dress again.”

For Fargo, who underscored the importance of mixed assortment in a store, Jil Sander “gives our customers a very appealing counterpoint to clothing which is often very complex, deconstructed or conceptual.”

According to Gilhart, the evolution from fall to spring denoted how Simons is becoming more secure and bold.

“It takes a lot of courage to show bright colors in the vernacular of Jil Sander, and he did it successfully,” she said, adding that even fall business has been on the upward track.

Today, counting in-store shops, Jil Sander has 33 signature locations worldwide, plus about 330 other points of sale. A store in Frankfurt will open at the end of February. Meanwhile, Simons is developing a new store concept that will bow for fall 2007.