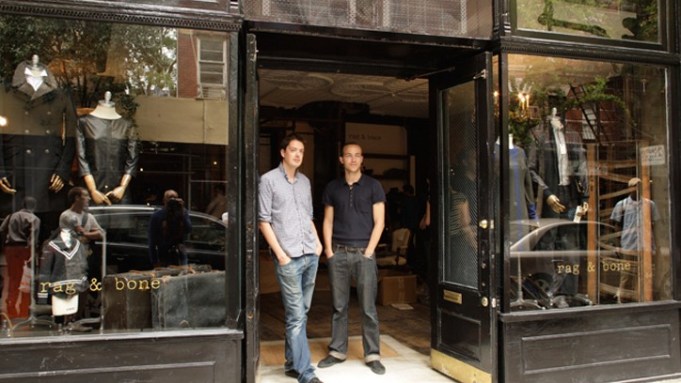 What a difference four days make.

Just ask the Rag & Bone designers, Marcus Wainwright and David Neville, who are jumping into the retail arena with their first flagship boutique on Christopher Street in New York’s West Village. Only last Monday, the 1,600-square-foot space was still one big construction eyesore. Fast-forward to Friday morning. The wooden floors are lacquered; the dressing-room walls, painted, and the cash wrap counter is up. Vintage knickknacks — and neatly hung clothes — abound. The green door shutters stacked against the wall earlier in the week have been chopped down, coated in white paint and are now oh-so-picturesquely placed above the dressing room entrances. Talk about a speedy turnaround.

Then again, when Wainwright and Neville set their sights on a project, it happens. The Brits launched Rag & Bone in 2002 with barely any fashion experience between them. Neville worked in finance; Wainwright, the telecom industry. (Co-founder Nathan Bogle, who left the company in 2006, was probably the most seasoned; he was a former model.) The company, nevertheless, racked up accolade after accolade for their Old English-meets-American workwear designs, including the CFDA Swarovski Award for Menswear in 2007. They’ve seen their women’s collection snowball, now accounting for 75 percent of company sales. Last year, they added accessories and, in 2008, full resort and pre-fall collections, as well as a children’s line. “We needed clothes for our kids,” quips Wainwright, referring to the fact that he and Neville both became fathers — a week apart — last year. Boys’ launched for the holiday season; girls’ will follow for spring 2009.

So it was an easy decision to search for their own retail space late last year. They thought about SoHo, the East Village, but ultimately, it was this tiny stretch of Christopher Street that attracted them the most. “We liked the idea of being in a residential neighborhood,” explains Wainwright. “This is a famously gay street,” adds Neville, “with a lot of overtly aggressive shops. There’s no retail here, and, given the proximity to Bleecker, which does [have a lot of stores], we thought it’d be fun.”

It’s this sense of juxtaposition that’s core to the company, and this carries over to the store itself. “We talk about our inspiration for Rag & Bone being a function of our English upbringing fused with sort of New York aesthetic,” says Wainwright. The decor walks a line between the two, with a slightly stronger emphasis on those Union Jack origins. The exterior, for instance, is covered in black lacquer, a design detail often used by shops in London like the centuries-old wine merchant Berry Bros. & Rudd on St. James’s Street.

Inside the Rag & Bone boutique, it’s a mix of industrial and antique furnishings — steel-frame mirrors, leather Barcelona chairs, vintage suitcases and an old Royal typewriter. The space itself, a former cafe, only adds to the vibe. Wainwright and Neville kept the original exposed brick walls and the textured tin ceiling. In fact, they’ve created racks from old plumber’s pipes to match the visible pipe system that runs throughout. “We were definitely sold on the shop’s inherent character,” Wainwright notes.

The designers also plan to feature a number of exclusive collaborations in the store. For instance, they’ve teamed up with the venerable British firm Dents for leather gloves and Savile Row tailors Norton & Sons for suits. “We appreciate an old-fashioned way of doing things,” remarks Wainwright. “We want people to understand our clothes by doing those collaborations. It highlights all the things we talk about for our company.”

Despite all the accelerated action before today’s store opening, Wainwright and Neville aren’t exactly taking time out for a breather. They have another deadline to meet this Friday: their 2009 runway show. “The men’s is done,” says Neville, “but we still have to finish the women’s.” Well, no worries; a lot can happen in a week.