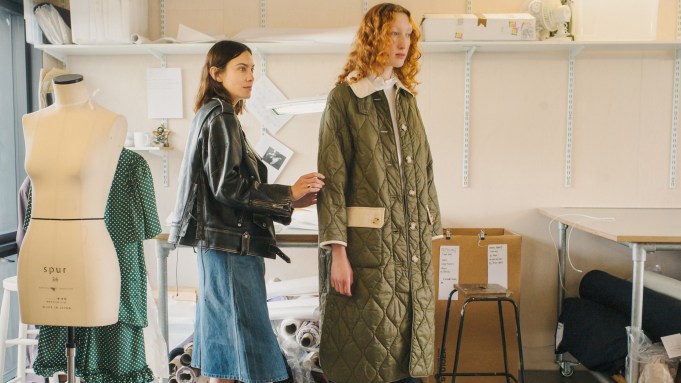 LONDON — Alexa Chung has been living in Barbour jackets for much of her life, wearing them horseback riding — in the rain — when she was a kid, shrugging them over her denim cutoffs at festivals, and zipping a bunch of them together, at Glastonbury, to make a giant sleeping bag with her friends. “When we were drunk, it felt like it worked. You could put it right on the ground, like a tent,” said Chung from her studio on a quiet street in East London’s De Beauvoir Town.

Chung has channeled all that affection — and some of the irreverence — into a capsule collection for the 125-year-old brand. After plunging into the Barbour archives in the northeast of England and getting her fingers — and hair — oily with the jackets’ signature wax coatings, Chung pulled her favorite pieces, and put her very particular stamp on the outerwear beloved of country and city folk alike.

The collection, Barbour by Alexachung, will land online and in stores in early June, with a further drop set for Aug. 1.

The collection — the first in a two-year, four-season deal with Chung’s brand Alexachung — includes seven pieces of outerwear, three tote bags and a bucket hat. One jacket is a patchwork of wax colors and tartan linings, while another style is short and fuzzy and looks like shearling. There’s a Delft blue rain poncho inspired partly by former Oasis frontman Liam Gallagher, according to Chung, while the most striking design is a long, quilted olive coat with a corduroy collar and cuffs. Model, TV presenter and writer-turned-designer Chung described it as “obviously, Princess Margaret.”

Although Chung has been running her namesake fashion label for two years and has collaborated with myriad brands and retailers before, including Superga, Marks & Spencer and AG Jeans, she admitted she was of two minds about teaming with Barbour.

“I think I have a fear of modernity sometimes. One of the reasons I didn’t do Barbour before was because I thought, ‘Why are people f–king with a classic?’ I don’t like it when they don’t honor what something ‘is.’”

At the same time, she could not resist the opportunity to delve into the jacket’s construction “and really reimagine my dream pieces.”

Chung tinkered freely with proportions to create more fitted, youthful silhouettes. She neatened up collars and cropped all the sleeves, although she also preserved a lot of Barbour’s signature details. During an exclusive walkthrough of the collection, she gushed about the raglan sleeve on the patchwork jacket and pointed to the roomy storage pocket at the back. “It’s really cozy and it zips both ways. I really geeked out on it.”

She also got down and dirty with all the waxed cottons at the factory and archive. “You have the greasiest hair by the end of the day, because if you touch the jackets after they’ve been freshly waxed, they’re really potent. You come home on the train with oil-slicked-hair, like a pompadour,” she said.

Chung is fastidious about silhouette, both with her own label, and the Barbour collaboration. Asked about her fashion demands, she doesn’t miss a beat: “The bracelet-sleeve length and the B-line mini. B-line, which I made up, is just a bit narrower than A-line, which swings out too much. And no one wants bigger hips,” said Chung, who regularly sketches out her designs on the creamy white pages of her beloved Zeichenblock notebooks.

“I hate long sleeves,” Chung added, noting the ones on her Barbour jackets have been cut to bracelet length so they never need to be rolled up. She also volunteered some other tidbits: “These are the ABCs of being ‘moi:’ One, wear a Barbour; two, make sure the sleeves are short, and three, pretend to be French. My whole ambition, at all times, is to not look like clothes are fussy or are eating you, and to make something hang so that it flatters.”

Paul Wilkinson, global marketing and commercial director at Barbour, called Chung an “exceptional fit” for the brand, which was founded in 1894, and is still family-owned and operated — and highly profitable. The company remains famous for its coats, jackets and protective clothing, which were originally meant to keep sailors; fishermen, and river, dock and shipyard workers warm and dry. The weatherproof, waxed cotton pieces, made at the company’s factory in South Shields, England, are still going strong, with Barbour’s annual revenue in excess of 200 million pounds, according to the latest numbers filed at Companies House in the U.K.

“Everything we do has to have an authentic link, and Alexa has worn Barbour since she was a child. She regularly wears our products, particularly at festival time. The inspiration comes from jackets Alexa saw in the archive, which have been translated into contemporary garments relevant for today’s customer with [her] signature twist,” said Wilkinson.

The collection will sell at Bloomingdale’s, Nordstrom, Saks Fifth Avenue, Net-a-porter, Brown Thomas, Fenwick, Selfridges, Harvey Nichols, Zalando, Flannels, Liberty and John Lewis, as well as on Barbour.com and alexachung.com. The branding and points of sale will read Barbour x Alexachung and the collection will be presented in store on dedicated, branded rails. Chung and Barbour have also created a new label, the image of a lighthouse from the brand’s archives. Prices are slightly higher than the classic Barbour collections, and range from around $193 to $363.

Tricia Smith, executive vice president and general merchandise manager for women’s apparel at Nordstrom, said the store already has a “strong and consistent” business with Barbour, “and we know our customers love Alexa’s chic, cool-girl style. We think this collection will appeal to customers looking for classic pieces with an edgy twist. The idea of taking a trusted British heritage brand and collaborating with an international influencer for a modern take was a perfect fit for us.”

Smith added that the store is planning a bicoastal set of personal appearances with Chung to promote the collection, one in L.A. and the other at the new Nordstrom New York City store, set to open in late October.

Chung said working with Barbour has helped her bring her own brand aesthetic into focus. “I think it helped me to find our silhouette a bit better. As we were adapting those Barbours, we were asking the question, ‘What would an Alexa Chung one look like?’ That really brought out things that are really classic to us, like a rounded Peter Pan collar, a smock swing shape or higher pockets. It really helped to hammer home what makes the AC silhouette,” she said.

While Chung said she relishes the challenges of having her own brand, it hasn’t been easy. “Fashion isn’t a ‘happy-making’ career path, necessarily. And it’s not a walk in the park, it’s not a joke. I anticipate ups and downs, but equally I’m along for the ride and there are people whom I admire who have enjoyed incredible careers and built fantastic brands: Margaret Howell, Mary Quant, Mrs. Prada, Paul Smith. People who seem like human beings still,” she said.

Having her own label has also given the 35-year-old Chung a route out of TV and modeling. “You need some autonomy. You can’t [continue to] be a girl, in a dress, for hire. It doesn’t age well.”

Chung has been operating in one of the most competitive segments of the market, contemporary, which has become saturated with brands since she launched Alexa Chung in 2017 as a buy-now-wear-now brand. She has since shifted to seasonal runway shows and remains focused on her vision for the brand, as well as its positioning.

“I’m trying not to worry about other people because it distracts you from focusing on what you’re doing. It is a very saturated market and it has definitely picked up speed since we’ve existed, especially at that price point. If anything, that pushes us to try and figure out how to be different. My worst nightmare is to be a flash in the pan.”

She is trying to make the best of all of the Brexit uncertainty and disruption. (The U.K. now has until Oct. 31 to come up with a viable withdrawal agreement, the second extension it’s managed to secure from the European Union). Chung’s company, which counts Pembroke VCT among its investors, has a warehouse in Holland, which she said has been in place since the first rumblings of Brexit.

“But in terms of employing brilliant people across Europe, Brexit is a concern. It’s not nice to think there won’t be this influx of incredible talent, or even people feeling warm feelings toward the U.K.,” Chung said.

She added that she feels “a little bit of hostility in the air” when she travels on the Eurostar to Paris, and even in Germany, “they were cracking jokes at me for being English. I mean, it’s just embarrassing, isn’t it? You just walk around apologizing to everyone — which is very British anyway. Although maybe we need more of it, maybe we need just another 100 years of saying, ‘Sorry.’”