Ralph Lauren’s Italian flagship, which opens Thursday, is one of the first components of Polo Ralph Lauren’s major push into Continental Europe. 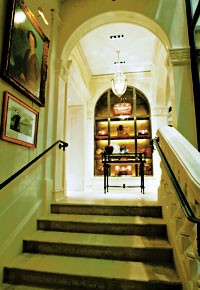 MILAN — A visit to Ralph Lauren’s first Italian store — a sprawling 16,000-square-foot space stocking everything from throw pillows to dog biscuits — should quickly dispel any Italian notions that the brand is just about colorful polo shirts.

The Italian flagship, which opens Thursday, is one of the first components of Polo Ralph Lauren’s major push into Continental Europe, which analysts have touted for growth potential. The Milan store is Ralph Lauren’s 12th wholly owned unit in Europe and company executives hope to open another 20 to 25 stores on the Continent over the next three to five years. For now, Lauren is mum on which city is next, saying only that the company is working on a lot of different locations.

Still, Lauren emphasized that Europe is a priority for the brand. He’s not intimidated by a lackluster retail record of American designers and brands on the Continent.

“This is not a trial run. This is where we are,” the designer said in a phone interview from his New York headquarters, where he was preparing for his runway show next week. “It’s about what you stand for. It’s not about being European or American.”

Roger Farah, president and chief operating officer, said consolidated sales in Europe came in at slightly more than $500 million for fiscal 2004, or about 19 percent of the group’s total of almost $3 billion, and that European sales should reach the $1 billion mark sometime within the next few years.

In order to achieve that goal, Polo will have to expand Europeans’ knowledge of the brand’s products past its embroidered polo logo. The Milan flagship is the first Italian sales point to offer the company’s vast Home Collection, which ranges from cocktail shakers to worn leather chairs, as well as the accessories line of handbags, shoes and jewelry. The store also features a made-to-measure service for men’s suits and shirts.

Lauren said that bits and pieces of his various collections can be found in wholesale channels in Italy, but he wants to give Italians a chance to experience the brand on multiple levels.

“I have friends in Italy who love the clothes but they haven’t been able to buy them in the same way as in America,” he said. “I think what I’m trying to demonstrate is what I’m all about. It’s about taking control of who we are and what we stand for rather than letting other people say it.”

Farah declined to give a sales projection for the store, but said the Milan flagship — like others in places such as New York’s Madison Avenue, London’s Old Bond Street or Rodeo Drive in Beverly Hills — is expected to do business at “well above the company average.”

And while the weakness of the dollar might appear to make it an inopportune time for an American brand to be opening a major store in Europe, Farah downplayed the effect of the strong euro. He stressed that he’s glad the exchange rate has stabilized and “our commitment to Europe is on a long-term basis.”

Rosy Biffi, who has carried several lines of Ralph Lauren women’s wear in her Banner store in Milan for 13 years, said she always has done well with the brand, offering something unique to European women, especially in terms of preppy women’s wear.

“No one does refined country-inspired sportswear like Ralph Lauren,” she said.

The new flagship is mammoth by Italian standards, dwarfing its Via Montenapoleone neighbors, Armani Collezioni and Prada. The four-story palazzo, which Ralph Lauren has on lease for 10 years, is the former home of jeweler Buccellati and the Panamanian consulate. A winding limestone staircase and a hydraulic bronze and glass elevator connect the four floors of women’s and men’s apparel and accessories, the home collection and gift items such as antique books on Lake Como and dog jackets.

Blue shutters and cascading foliage from the windows give the exterior a residential feeling. Lauren and his in-house team of architects put together an interior that is just as homey, but lighter in feeling than either his Madison Avenue or London flagships. There are pale hand-set Venetian plaster walls, chocolate suede-lined shelves, mahogany accents, bronze-framed display cases and light-colored jute rugs. The namesake equestrian imagery coexists with rock crystal chandeliers, zebra-skin pillows and a few antique Louis Vuitton suitcases, giving the store an eclectic yet European flair. On request, a small waitstaff can serve up cappuccinos on Ralph Lauren china.

“We hope this will be a place where people can come and meet their friends,” said Charles Fagan, executive vice president of global brand development at Polo.

The ground floor and lower level are home to the men’s collections as well the made-to-measure service. The women’s floor stocks accessories, such as leather lock-closure handbags and Navajo-inspired turquoise jewelry, and apparel from Collection, Black Label and Blue Label. The presentation, both on the store mannequins and on the store staff, is that of brand-mixing to show how various pieces can morph into styles ranging from weekend casual to aristocratic glam.

“I think the Italian man in terms of his fashion level is very connected with what I do, but Italian women haven’t seen enough of Ralph Lauren to know what I’m about,” the designer said.

As Ralph Lauren increases his square footage in Milan, it’s also pushing more ads to target locals. The company’s Italian media spending is up 35 percent on the year as it buys more pages in daily newspapers, such as Corriere Della Sera and La Stampa, and sets up billboards, said Fabio Mancone, Polo’s senior vice president of marketing, Europe.

The company will officially fete the store with a cocktail party slated for Sept. 23. Lauren says he will fly over for the occasion.

— With contributions from Courtney Colavita