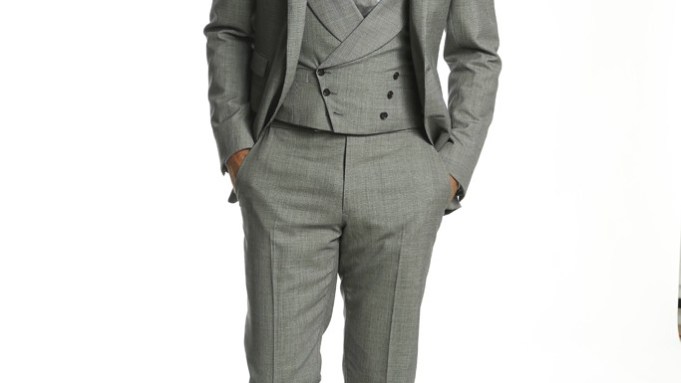 NEW YORK — Ralph Lauren’s Purple Label may soon gets its own home.

During a walk-through of his spring men’s wear presentation here Tuesday afternoon, the designer showcased an expanded presentation of his most luxurious offering with a blown-out sportswear and accessories component to complement its core tailored clothing, and said it may not be too long before the first Purple Label store makes an appearance.

“This could be a store in itself,” he said, pointing to the array of updated classic sportswear pieces in bright colors, including a bonded leather peacoat with metal hardware, cozy cashmere cardigans, printed swimwear, jeans in vivid orange and yellow hues, floral ties and polos in a variety of colors ranging from lime green to neon pink. There was also a grouping of safari looks including an over-the-top crocodile jacket with a retail price of $90,000.

Opening a freestanding store is “very possibly in the cards,” he said. The company recently opened a 10,000-square-foot store in Hong Kong “and it’s all Purple Label. That’s where it’s very strong and that’s why we’re putting together a whole statement.”

In its fourth-quarter earnings call in May, the company revealed a heightened focus on retail — domestically, in Asia, and in new overseas markets such as Brazil. Specifically, the company is gearing up to roll out Polo stores worldwide, including a 35,000-square-foot flagship at 711 Fifth Avenue here, between 55th and 56th Streets. A Polo store recently opened in East Hampton, N.Y., and a second is set to open at The Mall at Short Hills in New Jersey in September. Direct selling, which includes e-commerce, now accounts for 52 percent of the corporation’s business, up from 40 percent five years ago.

At his presentation, the designer showcased the many dimensions of his brand — from the rugged outdoors aesthetic of RLX and the preppy sensibility of Polo to the edgy, modern look of Black Label and the luxurious classic style of Purple Label. Although separate, the collections meshed seamlessly while still managing to maintain their own distinct personalities.

“The dimension is what I’m trying to show — whether we go up or down, left or right. That’s the thing about this company, the dimensions,” Lauren said.

He characterized Purple Label as “a very important category for us. We feel very strongly about it.” And he said it “has to have its own voice.”

In clothing, he included everything from a “European” blue tuxedo — “It looks really fresh and is great for fall,” the designer said — to double-breasted suits in traditional men’s wear patterns with varying lapel widths and narrow silhouettes. “I like the slim silhouette but I also like wide lapels on double-breasteds, so we do both,” he said. “In men’s wear, there are always subtle changes, not big explosions — at least not in my world. The changes don’t happen overnight.”

He characterized the clothing offering as “Savile Row-ish, because we give Savile Row credit for the imagery, but it doesn’t look like it.”

The Purple Label offering also encompassed a wide range of accessories including lavender crocodile moccasins, chukka boots and suede loafers in a variety of eye-catching colors along with travel bags, briefcases and luggage.

“We’re known for color in Polo, but the man spending a lot of money on his clothes also wants color and wants to step out, so we’re giving him a rounded package [in Purple Label],” he said.

The offering within the Polo collection was even more far-reaching. It included a blue-and-white collegiate story, patchwork-patterned sport shirts, plaid blazers, floral swimwear and an assortment of jeans, most with distressed finishes. Cable sweaters, cargo pants and a grouping of military-influenced pieces including camouflage-pattern neckwear and sport shirts blended with the preppie styling of the tailored clothing to complete the picture. RLX has now been included in the Polo presentation and added its active influence to the offering.

“We’re growing Polo throughout the world,” Lauren said. “It remains a very important part of our [business], so we’re updating it and leading the market — that’s why we’re doing a store.”

In Black Label, the focus this season was on the denim. Although Lauren said the suits “are selling well,” he homed in on the “edgier, hipper, young and cool” jeans and jackets. Much of the denim was white, while the jackets were black, which provided a stark contrast.

In the Double RL collection, the offering looked like it could have been shown in “an old dry goods store,” Lauren said, pointing to the dark denim and olive military-style pants designed to look like they were manufactured from dead-stock fabrics. The group included a three-piece denim suit, cashmere cardigans and an assortment of vintage-inspired casualwear pieces that could have been borrowed from the set of “The Grapes of Wrath.” “It’s more theatrical,” Lauren said of the Double RL assortment. “It’s like creating a movie. But it’s growing and we believe in it.” Double RL has also branched out into children’s wear. Lauren said the clothes he dressed his children in when they were little were passed down through the family and then “disappeared. But they’re landing here now.”

This season’s presentation was different in that Lauren and his team had constructed separate rooms for each label rather than having them flow from one to the other in one large room. The impression was that the designer is further refining the image of each of his brands with the long-term vision, as he has said in the past, of perhaps opening freestanding stores for each of them. And in each room, everything was from the World of Ralph — including the furniture, the lights and even the carpets. “This is all product,” said David Lauren, the group’s executive vice president of advertising, marketing and corporate communications and its newest board member. “This is product,” he said as he pointed to a huge crystal chandelier and a mirror in the Purple Label room. “This is product,” he said as he pointed to a lamp. “And this is product,” he said, pointing to a vase.

“And I’m product,” Ralph Lauren said with a laugh.