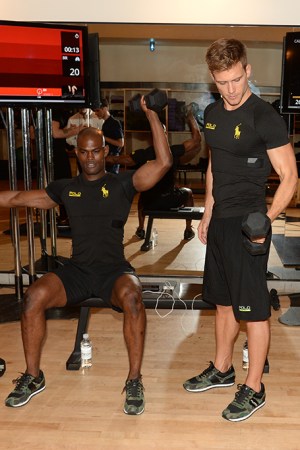 It’s been a year since Ralph Lauren entered the wearable tech game, introducing its PoloTech “smart shirt” for men at the 2014 U.S. Open, where ball boys and Marcos Giron, the NCAA singles champion, test-drove the first iteration.

Now PoloTech is ready for market, available online and in stores on Aug. 27, after a year of tweaking the prototype and adding features, including a fancy new fitness app. The shirt retails for $295.

David Lauren, executive vice president of global advertising, marketing and corporate communications, was confident in the product’s innovation during a Wednesday morning demo of the smart shirt and app with a fleet of trainers at Equinox in Midtown Manhattan. “This is the most accurate, best wearable technology on the market right now,” said Lauren, noting that it took the Ralph Lauren company two years to develop the smart shirt 1.0 with its in-house innovation lab and proprietary technology from Canadian-based OmSignal.

Style-wise the shirt is intentionally simple and straightforward: a black second-skin stretch T-shirt with yellow Polo Pony. “Our goal is to make it accessible, so customers get it and aren’t scared of the technology,” said Lauren. “It’s like Henry Ford said, ‘Give me any color as long as it’s black.’ He wanted people to feel comfortable with cars first.”

The shirt features a stretch band of silver fibers woven into the fabric circling the chest to connect with a small “black box” clip that snaps in to track biometrics and psychometrics including heart rate, breathing depth and recovery, intensity of movement, energy output, stress level, steps taken and calories burned. The information can be streamed directly to an iPhone, iWatch or iPod Touch fifth generation and above.

As for the app, it features three workouts — cardio, strength and agility — developed by Galvanized, David Zinczenko’s media and fitness company, featuring trainer Chris Ryan, who was on hand to demonstrate the shirt’s features. The workouts are customizable. The technology stores a user’s personal details, including height, weight and age, and merges them with data tracked throughout a workout to prompt what comes next. For example, if one set proved particularly challenging, yielding a high stress and energy output, the app might suggest a lighter set of exercises to follow. There are 10,000 possible workout combinations. The shirt also works with independent workouts, say, if a user went to SoulCycle or did a personal-training session.

Ryan cited the comfort and design of the product. “It doesn’t get in the way,” he said. “The box is positioned perfectly so it’s never in the way of your elbows. You can do burpees, anything on the floor. The band is tight but not too tight. It’s close to your vital organs, right next to your heart and lungs so it’s able to get the breathing rate. No watch is going to be able to do that.”

Obviously Ryan is not completely unbiased given his involvement with the project, but in stacking up the PoloTech smart shirt against other wearables he pointed out that watches and wristbands can get in the way of anything that requires wrist movements. The shirt provides a more seamless experience. “I’ve crushed workouts that I never thought I would want to do wearing anything that measures [heart rate, etc.] because [other wearables] were so annoying to wear.” The PoloTech shirt can be washed in cold water and hung to dry.

In the realm of wearable technology, the question is: Where is it going? For Lauren, fitness and sport are the obvious start. It’s what early tech adopters are comfortable with, and as he pointed out, Ralph Lauren is the first fashion company to enter the market at the intersection of fitness and sport. It’s not accidental. Ralph Lauren is launching a full athletic-focused Polo Sport collection next week and the PoloTech smartshirt is the “halo” product. But the goal is full lifestyle integration. A women’s smart shirt is forthcoming. It was delayed because female anatomy is more complicated to fit than male (breasts required more troubleshooting).

“When we sat down in our offices to decide which fabrics and shirts to apply this to technology to, we made a lot of choices,” said Lauren. “Ultimately, this kind of technology will be merged into all the kinds of clothing that we make: Polo shirts, pants, skirts, suits. Being first to market had a lot of complexities.”

He acknowledged the competition. “What the Apple Watch has begun to do is to see technology slowly expand beyond sports. Ralph Lauren is bringing it to a bigger lifestyle world. We’re the most feasible opportunity to bring it to the mainstream.” Among the examples he gave of non-sports-related avenues for the wearable technology were monitoring children to see if they have a fever or what one’s stress level was when speaking in front of a crowded room.” Lauren himself tried out the smart shirt when he spoke at Condé Nast’s International Luxury Conference in Florence in April. “I put my biometrics up on the screen,” said Lauren. “I was panicking and sweating the whole time, so it was all up there.”