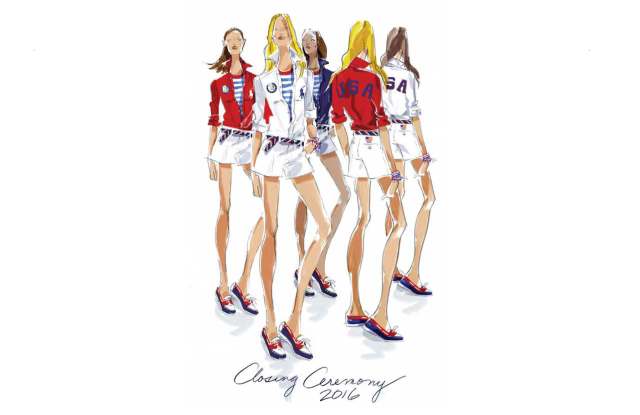 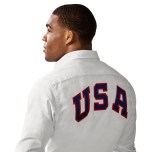 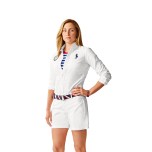 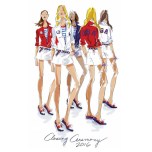 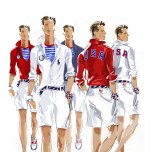 The countdown to the 2016 Summer Games in Rio is on — specifically, it’s 100 days until the Games begin on Aug. 5. To mark it, the U.S. Olympic Committee and Polo Ralph Lauren, the official outfitter of the U.S. Olympic and Paralympic teams, five games running, are today unveiling Team USA’s Closing Ceremony apparel. (The Opening Ceremony uniforms are unveiled closer to the Games.)

“Showing the Closing Ceremony apparel first is the tradition with the Olympics,” said David Lauren, executive vice president, global advertising, marketing and communications. “It starts to build energy because you have a visual of what the team and the spirit of the team will look like.” To that end, the men’s and women’s uniforms include a red, white or blue button-down shirt with the Polo pony detail worn over a striped T-shirt and chino shorts. For accessories, there are boat shoes in red, white and navy, striped cotton bracelets and a repp-stripe belt. Asked if there was any Brazilian-inspired flourish to the look, Lauren said that the Closing Ceremony outfits tend to be more classic than the Opening Ceremony and Villagewear collections.

“We’re always amazed when all of a sudden there are 600 or 800 athletes, depending on the Games, and they’re all walking in Ralph Lauren together,” said Lauren. “That’s when the clothing takes on power. We have to make sure it has a simplicity and graphicness that will resonate on television, in publications and on the Internet.”

The company also had to make sure that the fact that all the athletes’ uniforms are 100 percent Made in America resonates after the controversy surrounding the 2012 London Games, when a political and media brouhaha ensued after it came to light that the Team U.S.A. uniforms were manufactured in China. For the Rio Games, Ralph Lauren has contracted more than 40 U.S. manufacturers, some of which it works with on other, non-Olympic products, to produce the Opening and Closing Ceremony uniforms. All of the official uniforms for the athletes are made in America, though the Villagewear Team U.S.A. Collection is sourced globally — including numerous U.S.-based manufacturers.

Among the American manufacturers producing the official uniforms are Brooklyn, N.Y.-based jewelry company Scosha; Rochester, N.Y.-based Hickey Freeman, which employs 450 people, and Lewiston, Me.-based Rancourt & Co., which is lasting and sewing the boat shoes by hand.

“We want people to know the story and what the work has been and how we have listened and learned [after the 2012 games],” said Lauren. “We’ve always made stuff in America but perhaps we never highlighted it appropriately. Certainly when we’re dressing the athletes on the world stage, having the uniforms made in America is important.”

On the heels of the 2012 manufacturing upset, six senators — Robert Menendez (D., N.J.), Frank R. Lautenberg (D., N.J.), Bob Casey (D., Pa.), Charles Schumer (D., N.Y.), Kirsten Gillibrand (D., N.Y.) and Sherrod Brown (D., Ohio) — introduced the Team U.S.A. Made in America Act of 2012. The legislation proposed that the United States Olympic Committee require the athletes’ official uniforms to be sewn or assembled in the U.S. It also called for the use of fabrics formed and cut in the U.S. or knit-to-shape components from yarns wholly formed in the U.S. The bill did not pass, but Schumer has remained a voice for Made in America, and more specifically Made in New York initiatives. He personally wears Hickey Freeman.

“I commend Ralph Lauren for selecting Hickey Freeman as one of their manufacturing partners to produce this year’s Ralph Lauren-designed Team U.S.A.’s Olympic uniforms,” Schumer told WWD in a statement. “When it comes to dressing our Olympic Team ‘Made in America’ means ‘Made in Rochester.’ Hickey Freeman and Ralph Lauren joining forces to produce Team U.S.A.’s apparel is truly a match made in heaven. This partnership, which will start with Hickey Freeman workers making the shorts for the closing ceremony games, will not only guarantee our Olympians have the best uniforms to wear, but also continues a bright future of stability and expansion for manufacturing in Rochester.

“Year after year, I’ve committed to making sure this company can remain a strong force in Rochester — because we all know that these good-paying, middle-class, American manufacturing jobs are hard to come by. We all know that, when allowed to compete on a level playing field, top-notch U.S. businesses like Hickey Freeman and Ralph Lauren Corp. will win out. So I could not be more pleased that the growth we have worked for is taking shape — for the whole world to see.”

Lauren noted that the United States is one of the few countries in which the Olympic Team is not government-funded. The USOC contracts companies to support athletes. All of the Team U.S.A. uniforms are donated to the athletes by Ralph Lauren Corp. The official uniforms are available for sale to the public, and the Closing Ceremony apparel will be available for purchase today [ed April 27] on ralphlauren.com.

Prices for Team U.S.A. Ceremony apparel range from $79.50 for a T-shirt to $98 for a belt and $350 for the boat shoes. A portion of the proceeds from the sale of the apparel will go to benefit the USOC.