From crowds vying for a glimpse of him to huge billboards advertising his brand, Ralph Lauren is having a major moment in Tokyo. 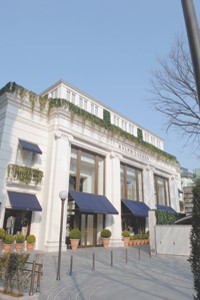 TOKYO — From crowds of people vying for a glimpse of him to huge billboards advertising his brand, Ralph Lauren is having a major moment in the Japanese capital — and for good reason.

Tonight, Lauren, who is in Tokyo this week with his wife, Ricky, and his children David, Andrew and Dylan, is scheduled to cut the ribbon on his first freestanding flagship in Japan. The imposing white building on Tokyo’s Omotesando shopping boulevard features about 18,000 square feet of selling space, which is dedicated to almost every aspect of the designer’s expanding universe. When it officially opens to the public on Thursday, it will be the largest Ralph Lauren store in the world, exceeding even the iconic Rhinelander mansion on Madison Avenue in terms of selling space.

The store is a testimony to the strength of the $10 billion Polo Ralph Lauren Corp., which has made freestanding retail one of its key priorities for growth.

Lauren, on his first trip to Tokyo in 25 years, explained that the Omotesando flagship aims to showcase to Japan just how much his world has evolved and become a multifaceted, American luxury lifestyle brand. “I wanted to express to them the broadness and the breadth of product that we stand for today,” the designer explained Monday during a walkthrough of the store.

The purpose-built Beaux Arts mansion is located in the heart of Omotesando, which is also home to mega-stores for Christian Dior, Louis Vuitton and Tod’s. According to a source familiar with Omotesando’s retail scene, a store like Lauren’s could expect to have sales of about $2,000 a square foot annually. At 18,000 square feet of selling space, that would give the flagship a volume of about $35 million to $40 million a year.

Lauren was keen to open his first Japanese flagship on Omotesando, which backs onto Tokyo’s trendy Harajuku district and Cat Street, considered by some to be the city’s equivalent of Manhattan’s Bleecker Street in Greenwich Village, where he also operates a store.

“Omotesando has an energy,” the designer said of his choice of location over Ginza, Tokyo’s other tony shopping destination. “Before we open each store, we study the area. Omotesando seemed to be the hippest, newest, most energized place to me, which is why we opened the store here.”

This story first appeared in the March 29, 2006 issue of WWD. Subscribe Today.

Where other luxury brands such as Prada, Tod’s and Christian Dior have chosen to create ultramodernist architectural statements for their Tokyo digs, Lauren deliberately went against the trend and chose a more classical, Beaux Arts-inspired limestone facade. He wanted the store to have a timeless appeal, while still giving the unit a touch of difference from his other flagships.

“I thought at first that maybe I should try this or try that, but in the end, I decided this was the right look for the company,” Lauren said. “This is who we are. Sometimes, it bothers me if you try to push something just for the sake of it being a gimmick. I am not an architect. The goal is not to be known for a building with tricks on it, but to be known for Ralph Lauren. I want the customer to come in and feel comfort and excitement.”

In Japan, the designer has five licensed boutiques and is sold in 300 stores, including Isetan and Seibu. While Lauren is widely known across Japan, he currently is most recognized for his basics assortment, from Polo and Oxford shirts to chinos. The flagship aims to alter that perception. Seventy-five percent of the products available in the new store have never been seen in Japan before, with a breadth of assortment that includes Collection, Purple Label, Black Label, Blue Label and Double RL, as well as accessories, books and decorative items for the home.

“The store represents what I believe in, and in Japan, she has not seen Ralph Lauren that way,” Lauren said. “Before, it was a narrow vision of what I am about.”

Japan represents the largest and most-developed market in Asia for the brand, accounting for 60 percent of its retail sales in the region of $1.4 billion, or about $840 million.

At a luncheon hosted at the store on Tuesday, Roger Farah, president and chief operating officer, told a crowd of about 125 Polo retail accounts that the opening of flagships typically has a positive impact on the wholesale businesses in the area. “Opening flagships raises the level of fashion and the level of luxury, which has a halo effect,” Farah said. “Whenever we have built a store in major markets, it raised the awareness of the brand. This store makes a statement to our customers and our retailers about how the brand has evolved, and that excites the consumers.”

Polo executives studied images of 1920s hotels across Asia, which often prominently featured limestone, to gather their inspirations for the Tokyo flagship. The resulting store has a much lighter and airier feel than many of his other flagships, with white limestone floors, hand-applied white Venetian plaster walls and Ottoman limestone columns.

The store facade is blocked slightly by a koban, which is a small, stand-alone police station on Omotesando. “It’s not my favorite thing, but we’ll deal,” Lauren said. “I know it won’t stop anyone from coming in,” he said, adding with a smile, “At least, we’re well protected.”

To work around the koban, which is to the right of the store, Polo’s creative team chose to design two entrances rather than a main entry, which would seem off-balance given the presence of the police station. The two entrances take customers through a passage that offers a colorful display of cashmere cable sweaters, polo shirts and select accessories, many of which are limited-edition and exclusive to the Omotesando store. These include an orange alligator Ricky handbag for $14,000, as well as orange, turquoise or pink versions of the Mini Aviator alligator bag for $8,000, the Bikini alligator bag for $5,000 and the Voyager alligator bag for $7,000. There also are alligator cuff bracelets in lime, pink, turquoise, orange and black available for $595. “In Japan, they want a lot of ultimates, so we decided to create something special for the store,” Lauren said.

The main floor has elegantly decorated areas devoted to different labels, including Black Label and Purple Label for men, which feature chairs from the home collection and a slick black pool table for display; the “Haberdashery” area devoted to cashmere sweaters in all hues, and a room for Double RL, which has a more bohemian feel, replete with a large carpet quilted from kilim and Persian rugs.

A sweeping marble staircase leading to the second floor is backed by a high-tech wall display of several beveled mirrors set with screens that showcase continuous runway footage. The side of each wall by the staircase is lined with black-and-white photographs of icons such as Greta Garbo, Marlene Dietrich and Diana Ross.

Women’s accessories are the first thing customers find on the second floor — a deliberate move by Lauren, who has recently made a strong push into the category. “The market here is mad about status brands, and handbags and shoes are the big thing,” the designer said. “While handbags were part of the fashion world when I started my career, I was always more focused on making clothes. We introduced [new] accessories this year and it’s been an enormous success. We have a waiting list for the Ricky bag.”

The second floor has airy rooms devoted to women’s Collection, RLX and Blue Label. The Blue Label area takes its interior cues from the style of Charleston, S.C., with many soft floral dresses and, in a nod to the store’s Japanese home, large screens.

“When you walk into the Tokyo store, you see the lightness, the brightness and freshness,” Lauren said. “The staircase is elegant and luxurious, and the women’s wear looks dramatic.”

Lauren added that he felt the Japanese were ready for his luxury lifestyle concept.

“There is a voraciousness for luxury here,” he said. “I look at the streets and I see Ferraris, Bentleys and Porsches. Loving cars, of course, I am very attuned to it.”

Recently, Polo has made freestanding retail a strategy for growth, especially in the U.S., from stand-alone Double RL stores to Rugby and smaller, more intimate Ralph Lauren concept boutiques. While the Tokyo flagship aims to bring many of these concepts under one roof, it does not, however, offer children’s wear, lines such as Rugby or furniture.

“Home is more complicated in Japan, because the Japanese typically don’t have big houses,” Lauren said.

Asked if he could envision some of these stand-alone retail concepts in Japan, Lauren pointed to Rugby and Double RL as potential candidates. The designer noted that some stores are already carrying Rugby here, but added that these stores are buying it at retail in the U.S. and importing it.

The store itself and tonight’s opening party have been planned to Polo perfection for months, and about 50 of the company’s staff members, including many senior executives, have flown in to oversee the store’s layout, displays and merchandising — not to mention details of tonight’s party.

The anticipation has been heightened by a marketing blitz, including Ralph Lauren billboards gracing the Sony and Nissan buildings, and special advertising in the Shinjuku and Ginza subway stations. Expected to make an appearance at tonight’s party are Princess Hisako, the widow of the current emperor’s late cousin; designer Hanae Mori; U.S. ambassador to Japan Thomas Schieffer; local pop stars Takuya Kimura and Kazuya Kamenashi, and Kabuki actors Kikunosake Onoe and Kantaro Nakamura.

Lauren is already cooking up his next plan for Japan, literally. He said there is a possibility that the top floor of the Omotesando mansion will be turned into a restaurant, which would resemble the designer’s eatery at the Chicago flagship. “We would probably serve fried tweed and Double RL suedes,” Lauren joked.