NEW YORK — Ramosport by E2’s trenchcoats were the centerpiece of a one-day photography exhibition in a trendy Chelsea art gallery, and now the show is hitting the road to be displayed in stores. 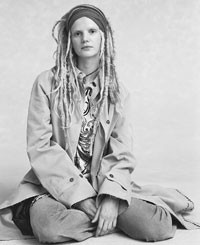 NEW YORK — Ramosport by E2’s trenchcoats were the centerpiece of a one-day photography exhibition in a trendy Chelsea art gallery, and now the show is hitting the road to be displayed in stores.

The Paris-based company tapped lensman Lothar Schmid to shoot a series of life-size black-and-white portraits that were unveiled in the U.S. on Sept. 20 at the Heller Gallery at 420 West 14th Street.

Titled “Masculin/Feminin,” the photos feature a hodgepodge of people who were primarily selected through an open casting or approached on the street. Casting director Brice Compagnon, who has done work for Elle and Benetton, eyed about 100 faces before deciding on the final 20.

Instead of looking highly styled, the cast of nonprofessionals wear the coats and jackets with their own individuality. In one shot, two women hold hands and wear one unbuttoned trench. In another, a white-bearded man sports a trench with his arm around his son. The man in the picture is Christian Giraud, Ramosport’s leading salesman, one of the few people who did not have to audition for the shoot.

“They were very handsome photographs,’’ said Douglas Heller, president and director of the Heller Gallery. “They didn’t look like commercial fashion photography once we put them up on the walls.

“Lately, fashion photography is being taken more seriously as art,’’ he said. “The industry is going in an interesting direction instead of trying to come at people with a direct assault about how to look at clothes.”

Located in the heart of the Meatpacking District’s high-end designer shopping area, the Heller Gallery is popular with a stylish crowd and a short hop to Jeffrey New York, Stella McCartney and Alexander McQueen. While Ramosport by E2 executives said the project was done “for art’s sake,” they were happy to inform many gallery goers who were interested in buying the coats that Barneys New York and Bergdorf Goodman carry them here.

However, the company wasn’t prepared for the 10 people who wanted to purchase some of the portraits. “We knew there would be a lot of interest in the coats, but we hadn’t thought about anyone wanting to buy the portraits,” a company spokeswoman said. “This has been a learning experience for all of us.”

Ramosport by E2 has agreed to sell some of them for $2,000 each, but there are no plans to make reprints. Takashimaya plans to hang some of the photos on the walls of its Fifth Avenue flagship this month. A few other specialty stores also have shown interest in the project, the spokeswoman said. Printemps staged an exhibition in its Paris flagship earlier this month.

The concept would have a greater resonance with consumers if companies removed their products from the equation, said Ron Pompeii, founder of Pompeii A.D., a New York-based creative services firm that specializes in brand experiences and environments.

“There’s still insecurity with brands that if they don’t show their products, they won’t be recognized. When commerce, culture and community are done in a sensitive way, in the end, people seek out who created this cultural experience.”