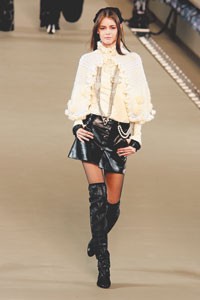 Chanel: Anyone who has ever pondered Karl Lagerfeld’s breakneck transcontinental agenda knows that it’s simply not in the man’s nature to take the easy way out. Why settle for rough-hewn bleacher seating, for example, when you can build a mega-runway flanked by VIP boxes down the middle of the Grand Palais? Likewise, Lagerfeld could easily have indulged in the trend du jour with a dark-hearted dissertation on Goth at Chanel. But haute Victoriana and high-collared blouses have long been his haunts. Instead of reprising a style that he delivered to fashion’s fore, the designer took a softer tack for fall, crystallizing his couture message with a look that was by turns stark and Modish, then romantic, working in only a few wicked frills along the way.

To open, Lagerfeld rejuvenated the house staple — those evergreen tweeds — pairing narrow-cut coats with sprightly minis to match, all in a range that ran from tame to zany, as in a combo sparkling with tutti-frutti metallic camellias. Other innovations included a puff of a parka spliced with alternating bands of nappy tweed and nylon, and a sharp black coat bordered with golden bubbles. Lagerfeld’s array of pared-down, Sixties-ish sportswear looked just as fresh, with simple sweaterdresses, jabot-tied blouses and even a cozy cape blooming with knit camellias.

For evening, however, things took a turn for the far-out, as in too far out. Clearly, Lagerfeld is in experimentation mode, and he decked out dresses with tribal beaded breastplates and armored the shoulders of his coats with beaded medallions that clung like barnacles. Moving on to tackle the sheer conundrum, fashion’s eternal puzzle, Lagerfeld wound up in the boudoir, pairing moody sheer dresses with filmy palazzo pants underneath. His lacy gowns were delightfully brooding in chiffon and lace, but what girl — from Lagerfeld’s red-carpet clan on down — doesn’t want to show a little leg when she steps out? Luckily, it’s a problem with an easy fix. Slip into one of Lagerfeld’s heavenly dresses and leave the pajama bottoms at home.

Alexander McQueen: Seldom in fashion — seldom in life — does reality live up to the hype. But Alexander McQueen’s fabulously creative, achingly wearable and, ahem, heavily funded show on Friday night was one major exception to the rule. It was, as they say, a moment.

“It’s Highland Rape II,” McQueen said earlier in the week, comparing the look of his meticulously crafted tweeds and tartans with his mid-Nineties tour de force. “It’s very Macbeth.” Inspired not only by Lady Macbeth but also the widows of Culloden, McQueen dedicated the show to Isabella Blow and promised Kate Moss to close, thereby harnessing himself a whole lot of womanly Anglo-power.

Dressed in McQueen’s tailored aristo-tweeds, models turned around a central glass pyramid, with Philip Treacy’s outrageous flock of bird hats heightening the slightly daffy mood. Hourglass jackets curved down over the hips, while subtly bustled skirts lent proper suits a cheeky touch that sent them happily wobbling down the sexy-frumpy line. Working in the McQueen clan tartan, he tempered the propriety of his opening with a rebellious edge, and without ever lowering the luxe bar. A washed leather jacket was paired with a slim tartan skirt, while a dramatic black fur jacket was shown with a schoolgirl’s kilt. There were dresses of featherweight tulle painstakingly appliquéd with lace or beaded with regal gold vines and laurels.

For anyone who had forgotten, McQueen is one heck of a talented tailor. And, in fact, he made many of the collection’s patterns himself. But while the clothes seemed perfectly to describe McQueen’s own eccentric point of view, they were also astoundingly commercial — both an editor’s and a retailer’s delight. Likewise, his evening gowns were the stuff of dreams, dreams that can also be translated into made-to-order bridal dresses, as he did for many last year. Gowns ran the gamut from a curvy Victorian number with thousands of pheasant feathers to storybook confections in frothy tulle, like the one worn by Moss. Projected into the center of the glass pyramid via a 19th-century optical trick, Miss Moss’s translucent image wistfully writhed siren-like in her tumbling McQueen frills. Too bad she couldn’t have been there in person — she missed a spectacular show.

Christian Lacroix: The title of Christian Lacroix’s fall show, “Pavane” — a play on the French word for peacock — promised a lavish display. And Lacroix made a lively enough start with a few sweetly nostalgic pairings: a wisp of a paisley minidress, for instance, was topped by a coat lined in the same fabric, while a sweet red cardigan was trimmed with folksy passementerie and worn with a matching skirt. Soon enough, however, as with all gimmicks, the matchy-matchy tactic lost its charm, especially when applied to, say, a brocade toreador’s suit.

While there were many fine items to be found throughout Lacroix’s collection, including pretty baby-doll dresses and simply done jackets that were in step with the season’s mood, as a whole, it lacked the spark of his best efforts. Of course, it didn’t help matters that low lighting had photographers howling from their pit. And perhaps the show disappointed because it came on the heels of Lacroix’s spectacular January couture show, when he turned a pack of unbelievably pretty peacocks loose to strut the runway.