True to its name, rapid manufacturing is quickly altering the face of design. 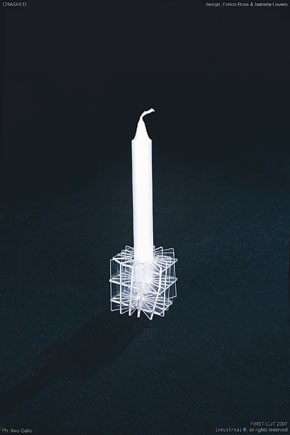 PARIS — True to its name, rapid manufacturing is quickly altering the face of design.

The process, which involves layering material to make objects (rather than using molds, assembly or carving), has been around since the Eighties. But today’s cutting-edge techniques, involving computers and lasers or jetting to create three-dimensional pieces printed layer upon layer of plastic, nylon or resin, give people virtual carte blanche to be creative.

“With this technique, there are no rules,” said Paris-based designer Patrick Jouin, who has used the process to create objects over the past few years and whose painted resin C2Chair was among his pieces recently on display at the St. Louis Museum of Art. “You are totally free. The computer allows you to do very complex forms.”

“These techniques are design nirvana, really,” added Richard Hague, professor of innovative manufacturing and head of the rapid manufacturing research group at Loughborough University in England.

Rapid manufacturing allows people to create a three-dimensional rendering on a computer anytime, anywhere, that can easily be put into an electronic file, sent to a client and then manufactured, with barely any lead time.

“What you see on your monitor is what I give you,” said Giordano Redaelli, a designer who also oversees production at Industreal, in Milan. “It is fantastic. You can simulate perfectly what you want with many kinds of materials.”

So what’s the hitch? Most say the hefty cost (and subsequent price tag) of large art objects created through rapid manufacturing remain prohibitive and render the creations more collector’s items than mass products. That’s why the process is more widely used today for making small-scale prototypes for projects such as buildings, airplanes and cars than for everyday furniture or accessories.

But it is believed the technology can be used more widely in the near future, as faster and more accurate techniques are developed and costs continue to fall. Once more, the use of new materials, such as metals, can widen the application’s reach to categories such as jewelry.

“There is enormous potential,” said Hague.

Indeed, designers hope to work with other types of techniques and materials in the near future. Kyttanen, for instance, envisions being able to make pieces in gradient materials that morph from one into another, like from silver to gold.

Hague said that at the onset of rapid manufacturing, there were many naysayers.

“I think certain people were laughing at us,” he said. “No one is laughing anymore. In the last few years, we’ve seen incredible growth.”