Unlike the average teenager’s mood, the junior accessories business is stable these days. Summer business was lackluster at best, due to hurricane weather in the Southeast and more schools calling kids back to class earlier in August. However,... 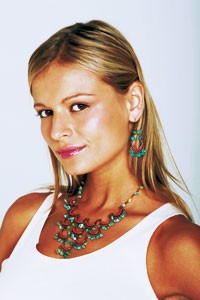 Unlike the average teenager’s mood, the junior accessories business is stable these days. Summer business was lackluster at best, due to hurricane weather in the Southeast and more schools calling kids back to class earlier in August. However, many firms found that by introducing new items to the market in the fall, they were able to excite customers and generate a better-than-expected holiday business.

In fact, companies said the junior customer never tires of new product. Keeping up with their interests and attention span is key to sustaining good business. Short turnaround times from the moment a buyer makes a request to shipment is also crucial, firms said.

Teenagers may complain that they are unfairly labeled a fickle bunch, but junior accessory designers seem to think there’s at least an ounce of truth in it. Many vendors reported that coming up with enough new product for their customer every season is their biggest concern.

“It’s always a challenge to come up with new groups,” said Faith Knight, who designs a Los Angeles-based eponymous accessories collection. Knight added that to keep her ideas fresh and distinguish her designs from the rest of the market, she tries to minimize outside influence.

“I don’t even shop the stores,” she said, “because I don’t want to be influenced by what’s out there.”

Still, the same trends seem to pop year after year, so Knight was able to gauge the popularity of nature-inspired themes. For spring, she is including shells and wood, two top jewelry trends seen across the market. She also is trying something different by offering embellished tutus in bright colors, an idea she came up with from observing teen style icon Gwen Stefani, who has been appearing on red carpets with four “Harajuku girls,” so named for the hip shopping district in Tokyo where trendsetters often don outlandish mix-and-match outfits.

But pinpointing an item or look that’s going to drive sales is difficult, she said.

Michael Datz, president of Trendy LLC, a Waltham, Mass.-based accessories firm, agreed. “Customers want a lot of new and they don’t want to spend very much,” he explained.

Datz said he sees the use of hemp being less popular for spring styles. So to meet the market’s needs, he is instead using leather mixed with gauze, rayon, shells and stones.

Datz said he hopes his trend-right direction will cause business for the firm to be equal if not a bit up from last year.

High IntenCity, a Valia, N.J.-based firm, kept ahead of the curve by introducing three new products in October: Loop di Loo, which features interchangeable pendants and necklaces; a licensed jewelry collection based on Madonna’s children’s book, “The English Roses,” and a series of trend-focused pieces like charm bracelets.

The trend-focused line is especially geared toward suiting the quick-moving teen market.

“We don’t keep a lot of inventory,” Valia Glytsis, vice president of marketing, said of the line. “When it’s in, it’s in, and when it’s out, we move on. Whatever is trending in the women’s market, we wait about six to eight months and then bring it into kids’. Retailers constantly wanted to know what’s new, and we focused on being more fashion-driven.”

When kids see their friends wearing the hottest accessory and go out in droves to copy the look, retailers may find themselves short. So it’s important that vendors are able to respond quickly to the stores’ and kids’ demand for product.

Charms, for example, were shown on designer runways for fall, and for spring, they will be a hit in the junior accessories market.

Jamie Glassberg, co-owner, said once he gets samples, goods can be shipped out to stores two to three weeks later. He thinks this has significantly helped business, since a retailer can call him with a request for a certain key item and receive product within weeks.

The approach is paying off.